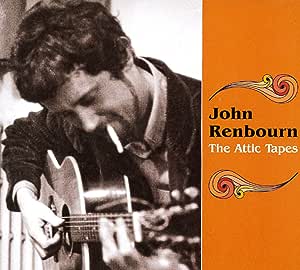 Paul Goldstein
5つ星のうち5.0 A Surprisingly Great Addition To One's Folk Collection, Yet Newly Discovered Vintage Recordings
2015年10月17日に英国でレビュー済み
Amazonで購入
I was surprised how quickly I received it, as it arrived here the day before it's official release. I was also surprised at the high musical quality of most of the tracks here, especially as they were a mixture of unreleased demos and live recordings that were made over the last few years before he signed his first record deal and started recording commercially in early 1966, and were obviously not intended for release then, and were apparently found in a friend's attic, which is odd. Some of these songs, he eventually re-recorded commercially for his first album, and with all of these tracks, the proper re-recordings sounded more polished with his guitar at different pitch. But those early versions here are equally interesting as it is nice to hear them in their original but unheard form. But one track, I Know My Babe which was his version of an old standard folk song I Know You Rider, of which his early version appears here, he eventually re-recorded for his second album Another Monday. With this, it is a job to tell which is the better version. Obviously, there are no exact known recording dates of these tracks, but John himself who contributed the info for the small booklet in this digipak before his death, confirmed that they were recorded over the last three years before his debut album. The sound quality here is usually not quite perfect which is understandable, but good bearing in mind the circumstances surrounding these tracks. He was an underrated folk singer who was known only to folk music addicts. Yet he, and folk contemporary Bert Jansch who also started solo, went on to become members of a moderately successful folk group of the late sixties Pentangle. who had a female lead singer, and then they continued solo, a rather unusual career pattern. Bert Jansch always received more praise than John, even though he never became an absolute household name either. But I preferred John as he had a stronger bluesier sound, and a more decent voice. But back to this CD, I was not so impressed with the two tracks by Beverly Martyn, tracks 4 and 10, with John on guitar. as she couldn't seem to sing in tune to save her life, while the two tracks by Mac Macleod, tracks 14 and 16 also with John on guitar are about average. Furthermore, the last track here, a version of a standard, Nobody Knows you When You're Down And Out which features Davy Graham on lead, but again with John on guitar, to me was just five minutes of dreariness, although Davy himself was an underrated folk singer. But this was by no means his best. Although I know little about Beverly Martyn or Mac Macleod, Beverly made a few unsuccessful singles in later years, but mysteriously met Simon & Garfunkel in the UK, who took her to the States with them, where she rather peculiarly contributed a line on their next single, Fakin' It, later on their Bookends album, the rather silly "Good Morning Mr Leitch, Have You Had A Busy Day", the Mr Leitch presumably referring to British Folk singer Donovan (Leitch). Yet it may have earned her some royalties. She also mysteriously appeared at the now legendary Monterey Pop Festival, as did Simon & Garfunkel. She mysteriously performed there under her real name of Beverley Kutnell, and was actually introduced on stage there by Paul Simon. Whereas Mac went on to become a session musician and eventually played guitar on Donovan's hit Hurdy Gurdy Man. But the remaining 15 tracks on this CD which are by John himself, including a few instrumentals are virtually top drawer. But as a session guitarist, he played on a few now legendary, but then little known recordings that David Bowie made in 1967 for the Deram label before Bowie became huge, but did not play on any of Bowie's later classic or more successful material.
続きを読む
12人のお客様がこれが役に立ったと考えています
役に立った
フィードバックを送信中...
フィードバックをお寄せいただきありがとうございます。
申し訳ありませんが、お客様の投票の記録に失敗しました。もう一度試してください。
違反を報告
レビュー を日本語に翻訳する

Wodehousefan
5つ星のうち3.0 Sub-standard stuff
2018年1月30日に英国でレビュー済み
Amazonで購入
I have to admit to being an out-and-out fan of JR, and if I could pick who I could play like it would be a toss-up between John Williams and John Renbourn. This CD, however, is for completeness freaks only. It consists of very early versions of tracks that John mainly later perfected and refined, complete with a few boring bits and guest artists, some of whom (and I'm thinking of Beverley Martin) you will either like or loathe. The best track is the first, which is a version of "Angie" (as Jansch called it, or "Anji" as Davy Graham called it) which shows that it could have been developed into something interesting instead of the repetitive "look-at-me-I-can-nearly-play-like-Jansch" right of passage that it has become for tyro folk guitarists. If you don't already own Renbourn CDs then buy a decent sampler (of which there are several). If you do own several Renbourn CDs already then avoid this one.
続きを読む
役に立った
フィードバックを送信中...
フィードバックをお寄せいただきありがとうございます。
申し訳ありませんが、お客様の投票の記録に失敗しました。もう一度試してください。
違反を報告
レビュー を日本語に翻訳する

Mrs LG Pearce
5つ星のうち5.0 The stuff of legend!
2016年1月18日に英国でレビュー済み
Amazonで購入
This is a varied selection of John's early live performances and other previously unreleased material. Very interesting to hear live versions of some of the pieces included on his first album. John Renbourn will be sadly missed by all lovers of the acoustic guitar so thanks John for all your inspiration and truly wonderful contribution to music.
続きを読む
2人のお客様がこれが役に立ったと考えています
役に立った
フィードバックを送信中...
フィードバックをお寄せいただきありがとうございます。
申し訳ありませんが、お客様の投票の記録に失敗しました。もう一度試してください。
違反を報告
レビュー を日本語に翻訳する

Michael Dale
5つ星のうち5.0 Necessary addition to any Renbourn collection.
2016年3月10日にカナダでレビュー済み
Amazonで購入
If you love the guitar you love John Renbourn. His passing last year left a giant gap. These early recordings including a collaboration with Davey Graham are a must for anyone's Renbourn collection. Not only are you treated to his legendary guitar stylings but also to singing voice which usually takes a back seat. Finally comment: If you don't have it buy it. If you do buy it or recommend it to a friend.
続きを読む
役に立った
フィードバックを送信中...
フィードバックをお寄せいただきありがとうございます。
申し訳ありませんが、お客様の投票の記録に失敗しました。もう一度試してください。
違反を報告
レビュー を日本語に翻訳する