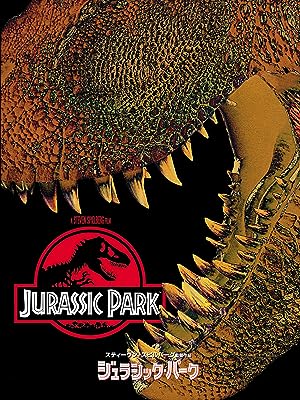 radar1960
5つ星のうち5.0 Great 3D effects
2017年6月10日に英国でレビュー済み
Amazonで購入
I am new to 3D viewing and understand from previous reviews that this film wasn't shot in 3D, but has been modified to 3D since. If that is the case, then they have certainly made a great job of it. Hopefully, they will soon do the same thing to the 2nd and 3rd films in this series (the 4th already being available in 3D and that is due to arrive in the next few days). I would highly recommend Jurassic Park to anybody (like myself) dipping their toes into 3D viewing.
続きを読む
8人のお客様がこれが役に立ったと考えています
違反を報告
レビュー を日本語に翻訳する

ab..c
5つ星のうち5.0 Superb audio and video rendering
2021年1月17日に英国でレビュー済み
Amazonで購入
This story of a mega-successful movie has been seen by most, so I won't describe this, but what puts this Blu-ray rendering above the superior standard of most is the sharpness of the images, wide palette colours and with superb sound. My Toshiba is an older (2013) 32", and I have a 2.1 audio, but this movie is THE best quality. And I have over 155 disks in my library. It looks brilliant, even on my bog-standard telly. It the best technical quality movie I have ever seen. The only other superior transformations of this level of quality are the movies 'Gravity' on DVD and 'Titanic' on Blu-ray. My Sony Blu-ray does a great job in upscaling DVDs. I bought 'Gravity' on Blu-ray and I could not see any difference between the DVD and Blu-ray disks.
続きを読む
違反を報告
レビュー を日本語に翻訳する

UK Review
5つ星のうち5.0 great 3d conversion of a big monster film from the 90s.
2015年10月4日に英国でレビュー済み
Amazonで購入
Amazing conversion of a great movie. The depth is out of the screen. I could see no ghosting. The 3d however they did was brilliant. People walking out in front of the screen when they did in the original movie. This gave an extra element of depth and meaning to the plot. The dinosaurs look great. They only qualm and it was a minor qualm. The film didn't appear to be as clear as modern HD movies. I am not sure if this due to the age of the film. When I mean clear some images were not as sharp as I would have expected for an HD movie. This could be just me. But this was a very very very minor issue. The conversion is selling point to a film great. I would compare the conversion to the Wizard of Oz. I am not going to review the film as we know what happens and it is an oldish film.
続きを読む
4人のお客様がこれが役に立ったと考えています
違反を報告
レビュー を日本語に翻訳する

Sam the dog
5つ星のうち5.0 Jurassic Park 3d
2015年10月8日に英国でレビュー済み
Amazonで購入
I'm certainly no expert on the technicalities of 3d film construction and the conversion process from 2d. All I can say is that, on my new Samsung 40" TV, this film looks fabulous! This is my first ever 3d film using active spectacles (the old passive red/blue green filter system put me off completely) and I was amazed at the image clarity, stunning, throughout. Some reviewers have indicated that there are few opportunities for those 'screen popping' moments in Jurassic Park; I didn't feel at all cheated. I wasn't disappointed because the added 3d depth kept me glued to the movie at all times, even in scenes that are relatively static - it really has been cleverly converted. I recommend this film without hesitation - it amazed me from start to finish! If other 3d films are as well done as this one then I can hardly wait to see them.
続きを読む
3人のお客様がこれが役に立ったと考えています
違反を報告
レビュー を日本語に翻訳する

For film not originally shot in 3D, it is surprising how many shots lend themselves to the 3D experience - even Spielberg admits on the extras that he must have had one eye on a 3D film. The 3D works well, although its not super obvious - no waving stuff towards the camera.

The image is crisp and the blu ray transfer appears well done (although there is one longish scene with Jeff Goldblum with a massive lens / light flare on the screen). Weirdly the extra detail does make the dinosaurs look a little less 'real', but not overly so.

The film itself most people know. Looks a little dated in places, but well executed.

The extras section is quite interesting as it deals with how the 3D was achieved (you do get the impression that a company has approached the studio / producers and sold them the idea though - not that that is bad, because its done well). How much involvement Spielberg had is questionable, but he turns up in the extras.
続きを読む
1人のお客様がこれが役に立ったと考えています
違反を報告
レビュー を日本語に翻訳する
すべてのレビューを参照します
トップへ戻る
Amazonについて
Amazonでビジネス
Amazonでのお支払い
ヘルプ＆ガイド
日本語ショッピングのための言語を選択します。 日本ショッピングのための国/地域を選択します。
© 1996-2021, Amazon.com, Inc. or its affiliates