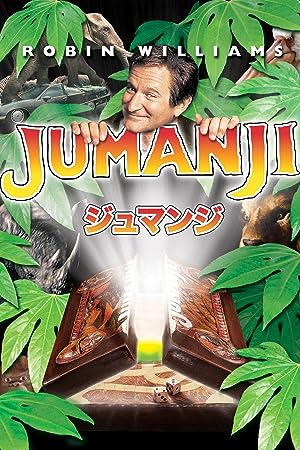 pjae27
5つ星のうち5.0 Definitely fun for all the family. My 5 and 7 year olds loved it. As did I! (38)
2018年7月16日に英国でレビュー済み
Amazonで購入
I absolutely love this film. Although I am 38 I missed it the first time round and have only just seen it with my children. It is sooo good. It has everything: tears, laughter, scary moments. Brilliant acting. The concept of a board game coming to life is perfect for my children's ages (5 and 7). They were not at all scared by this film (although it is a PG). I have seen scarier U's. It should be noted that the new Jumanji is a 12 so I would need to check that out first. This film uses computer graphics well- it must have been in its infancy but they are high quality. It has such a good plot. Lots of heart. Love stories from family to friends and love interests. All the different threads get tied up in such a satisfying way that I feel it is a screenwriting masterpiece! Great acting by all and lovely to see Robin Williams again. He is great as always. I really enjoyed this. Definitely fun for all the family.
続きを読む
2人のお客様がこれが役に立ったと考えています
違反を報告
レビュー を日本語に翻訳する

Thebes
5つ星のうち5.0 Jumanji 4k is worthy of the format.
2018年1月22日に英国でレビュー済み
Amazonで購入
Properly converted original in to the spanoingly good 4k format. Unlike some films released this one is a joy to watch. The CGI hasn’t aged well, but it is an old film so we can forgive that!

Fun family film with the amazing late Robins williams in the main role as Alan Parish who gets sucked in to the board game of Jumanji.

Set yourself up for the new The Rock’s Jumanji by watching or revisiting this old favourite.
続きを読む
5人のお客様がこれが役に立ったと考えています
違反を報告
レビュー を日本語に翻訳する

The Reader
5つ星のうち5.0 The only real animal is the dog!
2017年12月8日に英国でレビュー済み
Amazonで購入
A fabulous film that I haven't seen for years. Robin Williams is such an admirable character & plays the part of a boy in a man''s body. His "nah, nah" attitude with the children makes you smile. As does his relationship with his father/big game hunter. If you haven't seen this, please do!
続きを読む
2人のお客様がこれが役に立ったと考えています
違反を報告
レビュー を日本語に翻訳する

Ryan
5つ星のうち4.0 A blast from the past!
2014年1月30日に英国でレビュー済み
Amazonで購入
I seen this for sale on Blu-ray and I wanted it straight away.

This was one of my favourite films as a child.

I always owned it on VHS but I had to to add to my Blu-ray collection.

The picture is great and it fills out the entire screen which I love. Although, I do think it could have been better. The picture seemed to lack contrast for me. The colour just wasn't as prominent and the picture wasn't as crisp as Blu-rays of older movies usually make them.

That's not to say the quality was bad, it was great! But I've seen better.

Also, I love the interactive Jumanji game you can play in the special features. The Jumanji game could have been slightly better but I really did enjoy it even though my brother hated it.