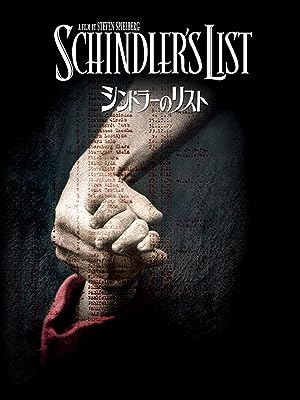 Absolutely essential viewing for everyone who has never been through war, nor experienced the horrors of arbitrary tyranny.
This is far beyond art or entertainment , this is a labour of love, a plea for such things not to happen again, an educational
FEELING insight, in fact a spiritual experience. Of course it must be seen, several times, it shakes up one's whole being.
Brilliant performances from Liam Neeson (Schndler), Ben Kingsley , and above all Ralph Fiennes as the cruel, lost and
tormented camp commandant. An ode to the vagraries of life, the Nazi exploiter gets angry and becomes a hero, the evil
commandant starts to question his Nazi indoctrination under Schindler's influence, the inmates just cannot believe - even in a
muderous Nazi labour camp what is related of Auschwitz, the sheer horror of the supposed superior SS hierarchy corrupt and
bribable to the core.

Outstanding inciidents one could quote are everywhere. Schindler's manouvering and manipulations - for good ends. His rescue of his
protegés' children from the SS at Auschwitz - "see, little hands, not useless at all, essential to polish the inside of our shells", his
strong reprimand to Ben Kinsley for forgetting his pass & getting himself into the death wagons - and wasting Schindler's time
rescuing him, the sheer humanity of Schindler causing water to be sprayed onto the wagons in the hot sun & making himself the
butt of SS laughter. The man was a total hero, as we can all be at the right place & time, but did you know that he was also a failure
in real life & business? Fortunately he was always bailed out by the Jewish friends he had so nobly saved - at such financial, emotional,
and exhausting cost to himself.

The final scene where we move to to-day and into colour completes an absolute masterpiece. If I were Spielberg,I would rest my case
before God with this one film, feeling I justified my life, served and educated. Five stars is too little. because this film transcends the
seventh art completely and takes us right out into life & makes us reflect why we are here and have we done enough with our lives.
続きを読む
38人のお客様がこれが役に立ったと考えています
違反を報告
レビュー を日本語に翻訳する

Gary White
5つ星のうち5.0 One of the most important films of the late 20th Century
2017年11月8日に英国でレビュー済み
Amazonで購入
This Blu-Ray disc is an HD transfer of the DVD version. It contains the three-hour movie and various documentaries about the film from the time of the original DVD release (late 1990s).
Regularly voted one of the greatest films of all time and certainly this is one of the most important films of the late 20th Century.
Spielberg often attracts rather harsh and unjustifiable criticism, as being emotional and sentimental and producing low-brow films. Schindler’s List is sometimes condemned as being over-indulgent, deliberately manipulative and historically inaccurate. I sometimes fear there are rather unpleasant overtones in this, linked to the director’s Jewishness. Spielberg can get a hard press in Hollywood – it seems that producing very well crafted films, that have huge popular appeal (Jaws, ET, Jurassic Park, Colour Purple) is simply not good enough. Many of his early films were populist for sure and perhaps not at the intellectual cutting edge but I found them immensely entertaining. But with Schindler’s List, the Academy Award committee had to sit up and take note.
Schindler’s List propelled Spielberg’s filmmaking in another direction, mores serious, more poignant and more relevant. There are some historical inaccuracies for sure but maintaining the strength of the narrative for three hours is a remarkable achievement in a film. It was a hugely important film to make, and clearly a personal journey for Spielberg. The strength of its message is central. The Holocaust has been poured over and analysed and has seen innumerable fictional and documentary film productions over seven decades. To tackle it in an original and engaging way was Spielberg’s masterful achievement and the film, 24 years later, remains his crowning glory.
The acting is superb. Neeson, Kingsley and Fiennes excel in the central roles. The cinematography is crucial – you have the impression of looking in as an outsider on real events. The score adds to the poignancy. The closing sequences – Schindler saying goodbye to his workers at the factory and then the cut to modern-day Israel and the parade of the surviving Schindler Jews (placing stones on his grave) is one of the most powerful in any film.
続きを読む
13人のお客様がこれが役に立ったと考えています
違反を報告
レビュー を日本語に翻訳する

Denise Howard
5つ星のうち5.0 Intense and emotional viewing
2019年6月23日に英国でレビュー済み
Amazonで購入
I always knew I needed to add Schindler's List to my collection one day, I also know that I will always be deeply effected when I will return to this film - always. I had read the book but the whole process Steven Spielberg uses to bring a brutal reality to the story packs a punch to the gut, because I may read the authors words but Spielberg makes you witness the horror and does not water it down.
For me there is a voice in my head reminding me constantly that this is not fiction and the inhumane and utter terror of the camps, the commander Amon Göth performed by Ralph Fiennes (he won a BAFTA and nominated for an Academy Award) was pure evil, he must of been a psychopath. Ralph Fiennes in costume and mannerisms was so alike of Göth that When Płaszów survivor Mila Pfefferberg was introduced to him she physically shook
The other actor Liam Neeson also stood out playing Schindler, he didn't idolise the man, he made him into the also flawed human Schindler was... but he did portray him as the human who did achieve a moral compass and was a man prepared to make a difference. Neeson's scenes at the end of the film was so compelling and emotional... I was in floods of tears...
The only disappointment for me was the special features were a let down. If you are looking for more in depth extras there are special editions which I wish I had now purchased.

The last comment for me is that this film should be part of a child's education... we must show our children how humans can dehumanise each other so easily, how one of the most intelligent nations of the world could be turned into bigots and assassins. And there is still ethnic cleansing in modern times, and still racism for the Jewish population.
続きを読む
5人のお客様がこれが役に立ったと考えています
違反を報告
レビュー を日本語に翻訳する

Uncle Bob
5つ星のうち5.0 Everyone should see this film
2019年1月5日に英国でレビュー済み
Amazonで購入
For some reason I've never watched this movie when shown on TV. Intrigued by the fact that it was shot almost entirely in B & W and wondering the significance of the little girl in the red coat, decided to buy it SH on Blu-Ray from Amazon.
We've all seen various eyewitness testimony of the holocaust which are of course essential given the passage of time since those dark days. I found the film transported me there confronting the horror of getting off a train at Auschwitz with smoke and flames pouring from the chimneys of the crematoria and facing imminent death. Everyone should see this film.
続きを読む
1人のお客様がこれが役に立ったと考えています
違反を報告
レビュー を日本語に翻訳する

Andy Willey,film historian.
5つ星のうち5.0 A true and moving story.
2017年9月29日に英国でレビュー済み
Amazonで購入
Moving tribute to a great man who saved many people from certain death,and yes the place the survivers are walking towards at the Films climax is Israel and Jerusalem the golden plays on the soundtrack so if you hate the idea of a Jewish homeland then go and believe the popular lies about this amazing little land a land of freedom for all yes even the Palastinians.
続きを読む
5人のお客様がこれが役に立ったと考えています
違反を報告
レビュー を日本語に翻訳する
すべてのレビューを参照します
トップへ戻る
Amazonについて
Amazonでビジネス
Amazonでのお支払い
ヘルプ＆ガイド
日本語ショッピングのための言語を選択します。 日本ショッピングのための国/地域を選択します。
© 1996-2020, Amazon.com, Inc. or its affiliates