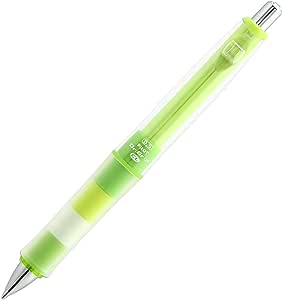 GMP
5つ星のうち5.0 TL;DR: Really, really good mechanical pencil. Get one!
2015年8月6日にカナダでレビュー済み
色: 【軸色】グラスグリーンAmazonで購入
Pilot Dr. Grip pencils are pretty much my favorite, and have been for over 10 years. I started using them when I was in high school. Being someone who takes lots of notes AND is subjected to wrist/hand pain, I was looking for a comfortable mechanical pencil that could be used for extended period of time. The Pilot Dr. Grip is big (over 10mm in diameter), but it's mostly made of plastic, so it's also pretty light. Not too light though, because there's a metal tube inside that's part of the "shaker" mechanism, and that gives it just enough heft to make you feel like your holding something. It's pretty resistant. I've had one for over 10 years, used it pretty much everyday for at least 5 of those years, and it's still working like a charm (some of the paint eventually came off though, but meh...).The gel grip is nice to hold, and doesn't get slippery even if you hold it for hours. All those things means you don't need to put a lot of pressure to hold the pencil, which means less hand fatigue at the end of the day. I also have a basic Uni KuruToga (the green plastic model), and for me the Pilot Dr. Grip is by far the most comfortable to use, and the one I'll pick if I have the choice. The lead doesn't rotate to stay sharp like it does on a KuruToga, but this is a 0.5 mechanical pencil, so for me, it doesn't make much of a difference anyway.

The "shaker" mechanism means you can just shake the pencil to extend the lead, so you don't have to really stop writing to do it, at least when you get used to it. You just do a little wrist move and BAM! new lead! That also means that if you tend to shake your pencil around for no reason, the lead may extend without you wanting it to. And you don't really control how far it extends (one "shake" is usually enough unless you want a super long point)... But you can always press the end cap to extend or push back the lead like you would on other mechanical pencils. There's also a small eraser hidden under that cap, but it's not really useful and will wear down quickly.

This model is the "Play Border", and I got the pale green version. Basically, you can unscrew the metal point of the pencil, pull away the gel grip, and inside are 3 colored rubber-like colored pieces that you can rearrange like you want. You can also unscrew the pencil in the middle, and there's a small rolled acetate inside the clear part of the body that you can take out and decorate. I've put some stickers on mine because I don't have anything else nearby, but I'm fairly sure you could also draw on the acetate (with something like a Sharpie paint pen for example), or add other layers of acetate and drawings/stickers to make a neat little montage. There are plenty of other colors and models to choose from though, so if this one isn't really your thing, I'm sure you can find another you like. I have 2 old models (icy blue and pearl white), and as far as I can tell, they all give similar performances.

It came with four leads inside the barrel, which is cool. They work nicely, but nothing miraculous. There is no indication of what grade/brand they are. I'm pretty sure they're just regular HB leads. Of course, you can easily switch them out for your favorites.

Amazon Customer
5つ星のうち4.0 Satisfied
2019年7月21日にカナダでレビュー済み
色: 【軸色】フローラルピンクAmazonで購入
I gotta say this pencil is good! I usually have a death grip when I hold my pencils, but this relieves it! My only con for this pencil is that the grip part attracts a lot of dust.
続きを読む
役に立った
フィードバックを送信中...
フィードバックをお寄せいただきありがとうございます。
申し訳ありませんが、お客様の投票の記録に失敗しました。もう一度試してください。
違反を報告
レビュー を日本語に翻訳する