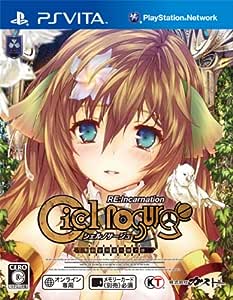 I love this little game, i had the original before i gave it to a friend to play and now i am getting Re:Incarnation which includes Chapters 2-4 and a DLC slips for Chapter 5, this also include the Ambassador Reincarnation DLC which is roughly $15 sold seperately from the previous game; you also get Polars Memory 1 and 2, i think of these are side story where you can unlock an area or 2, and get a few more in-game items like extra costumes for Ion, this also has Konpota and Narikiri sets included.

Graphics and Gameplay
Graphically, it is a cell shaded game in a particularly small environment most of the time; much like a fighting game or sports, you are in her home, the beach or a backdrop in most cases but the way it is done and displayed keeps the monotony down. The characters themselves look very good, YouTube videos and photo's do this games rich amazing colors no justice

Difficulty & Other
If you do not understand Japanese, you may have a difficult time with this title as it is loaded with anywhere from 2 to 8 options during dialog, and some of them can make Ion angry and actually ignore you for hours at a time, i encountered one specifically that said "You'r breast are too big", Ion replied with "You don't like that kind of thing?" at which point you can reply with "Yes; No; I was only kidding or Ewww" I knew what i was doing and i wanted to see the outcome of the choices, Ion would not allow me to interact with her for at least an hour and a half, anytime i touched her, she would brush her clothes with an angry face or tell me to leave her alone for now, Ion's trust isn't terribly difficult to earn, even guessing you have a 70-80% chance to make her pretty happy, also don't mess with her after she goes to bed unless you know she is in a good mood. This game relies on you keeping your relationship with her to a certain level, which you can check at anytime, it seems like things aren't terribly difficult as long as you keep her neutral or (Above 50% of the bar).

Tips
-When you first get the game the free camera and some other things may be obvious, but the menus will hide from you until you accidentally stumble across them many hours later. The best way to get started is to know that the "P" on the right side of the chat advances the chat, but do not press it over and over, you can skip valuable options in dialog by accident, you need these options to build your relationship with Ion in order to make diving a better experience and take less time (up to several days) for you. You can also hit the "Auto" in the top left during dialog if you don't want to keep pressing the page button, this is great because some dialog scenes are over 10 minutes long! it will stop when an option for you presents itself, but don't be discouraged, at no point in the game are there any wrong answers, or atleast nothing you can't fix later, most people choose one of the first 2 options since this generally is an agreement, a further question or a compliment, just remember it isn't always the case.

-When you get into an event where Ion has to cook, work, draw or do something is when the menus will test your patients. The main menu you will encounter at any time is what i call the "Main Menu" You get 5 bubbles at the bottom and a sub menu for each of those on the right side., From Left to Right, you have Options, where you can also change the difficulty among other things. The chat bubbles is for online, but i noticed most people are Japanese or helpless english speakers(rare) This chat is used to trade, rent or exchange your fairies, because when you get a fairy they are level 1 (i've had one come out as a Lv.5 which was weird) But you can rent fairys from other people who are in the 100's of level in order to repair Ion's memry extremely fast, they will also earn you more Hymn Points, which is essentially your currency for the game, for skills, slots, costumes, more fairys and many other things.

-The mail icon is used between friends and it is an in-game mail receiver, you will receive mail from npcs during the game that sparks events so you can gain more HymP and progress the story.
The fourth one is for events and such, they give you a pictoral guide to this one, so you don't need me confusing you.

-The last one is a picture of a fairy, this is essentially the dive menu as i've called it, it tells you how much you will earn for a dive; dives that are available.

-The "Hand" to the left of the dialog box is to touch or interact, if you hold it down and touch her on the screen she will react differently depending on where you touch her. I have found her hand and arm to be a pretty safe zone; sometimes she is offended if you touch her head, face and hair, "Am i some kind of pet?" but even with her hand you have to be careful because she keeps her hands in front of her a lot, you may hit her boobs by accident and then you have lost a lot of trust; you can get some of it back by apologizing "墨～ごめんなさい。" however it will still set you back anywhere from 20mins to an hour.

-After Ion goes to bed, things get pretty boring, sometimes i have been able to dive into her when she sleeps and other times i can't, this part of the game mechanic i either missed or just don't understand, but for the most part, there isn't much to do other than look around her room (or her) talk to other people online if you can find anyone english.

-Some USA barcodes do work, but more often than not, they don't. You can however easily go to Google and search for Japanese Barcodes under images, and scan them directly from your screen. If you get an uncompatible one, don't freak out, just try another one, i have noticed games and movies work pretty well. Try to avoid one's that look like they are art, many of them are invalid.