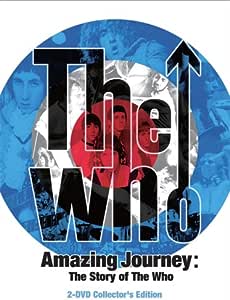 Greg Chapman
5つ星のうち5.0 A very good collection-great shame about the lack of subtitle tracks!
2017年6月27日に英国でレビュー済み
Amazonで購入
I very rarely give five stars to anything without subtitle tracks, but this is an exception. It consists of 2 DVD's, one being the Story of the Who and how they formed in South London to create their own Rock style. There are separate interviews with each band member, including the late Keith Moon. and the late John Entwistle. There are also interviews with rock contemporaries, friends and family. This is just the first disc "The Story of the Who".

On the 2nd disc ""Amazing Journey"- Six Quick Ones, we see into Ealing Art School. through the bullseye and Mod look, and into Pop Art. We then hear of how the Who became visual as well as musical. We also see filmmaker D.A.Pennybaker filming the Who in the studio recording "Real Good Looking Boy". We also see very rare concert footage. There are four films, but "Amazing Journey" is a film in six separate parts, which deals again with the Who in depth.

There are also 2 massive DVD Bonuses. One is the "Scrapbook". which is again the story of the Who. Cincinnati concert (tragic) in 1979 is also covered, and we hear about Pete Townsend writing "Won't Get Fooled Again".

The other bonus is long lost footage of the band performing as "The High Numbers" at the Railway Hotel. This was shot in1964 at the Railway Hotel, and was thought lost until recently found. This was filmed by Kit Lambert and Chris Stamp. This is the earliest piece of film of the Who known to exist!

The only thing that lets it down is there is no subtitle tracks. For Who fans, it is a massive piece of History, and one which they should be part of their collection. It is well worth noting that when it was shown on TV, there were subtitles available!

Philbee
5つ星のうち4.0 Outasync classic
2012年7月11日に英国でレビュー済み
Amazonで購入
I've already pitched in my tuppence-worth on The Who's 'Kids are Alright' Blu-Ray, so was pleasantly surprised by this more sober take on The Who's mythology. That's not to say there isn't some very funny stuff and ear-bleeding music in there, but there is an overarching melancholy to the film. Both Moonie and John Entwhistle are remembered with love, respect, and loving disrespect by Pete and Roger who find themselves playing the role of 'keepers of the flame'. It leaves the viewer with a feeling that we are witnessing the 'Twilight of the Gods', the like of which we'll never see again.

As a project, this video was clearly designed to be a more considered retrospective than 'Kids are Alright', and doesn't pull it's punches. It also avoids duplicating too much material from that movie, but sometimes sails a little too close to the 'South Bank Show' approach to band biographies, betraying a certain nervousness in the band about their place in rock history.

That said, the main sins on this DVD are technical. There is a annoying level of video hatching over a (recently-filmed) Pete interview - but worse still, the audio is about four frames behind the pictures, making the lack of lip sync quite distracting and the music out of time, which some might find difficult to take. I tried it on different make of DVD player to check if it was the player at fault - but no, it was still there. Other details like video editing gaffs (yes, I realise some of them are deliberate, but some definitely not), incorrectly-spelt captions and a bit of temporary voice-over inadvertently left in the final edit suggests this was produced on a much smaller budget than 'Kids'. Perhaps that's why it's being sold at such a low price - and with that in mind, it's easier to forgive it's flaws. Perhaps they'll address these on a future Blu-Ray release - and if they did, I'd buy it.

Thelma
5つ星のうち5.0 Loved this
2009年5月7日に英国でレビュー済み
Amazonで購入
Yes, I knew most of it (if not all of it) and yes, I'd seen plenty of the stuff before, but I still love this DVD. There are some fantastic clips of the early years of the band, and the individual biographies are fascinating and give you more of an insight into the members of the band.

Pete Townshend is hugely articulate and interesting, though his sense of humour has faded somewhat over the years. He and Keith used to clown around together on and off the stage, and that seemed to happen less and less after Keith died. Roger Daltrey is very open and candid and clearly loves/loved each member of the band dearly.

The way they both talked about Keith and John's deaths was very poignant. John's death is still pretty fresh and clearly pains them, but Keith died nearly 31 years ago, and yet you can still see that it affects Pete and Roger.

Being a Who completist, it's nice to have a copy of this DVD. But even if you're not a rabid fan but have an interest in the band, it's worth seeing as I think it will only increase your interest. If it makes you want to find out more about them, then go and buy the Deluxe Edition of the Live at Leeds album, and get the Isle of Wight Festival 1970 DVD. The editing and filming of that particular DVD isn't brilliant, but the lighting is generally great which makes it more enjoyable. As an aside: I'd like to see the whole of that concert released on DVD!

Go get this, sit down with a cuppa and some biscuits and wallow in nostalgia for a couple of hours. I know I did!

C.Elder
5つ星のうち5.0 See Them,Feel them ,Hear them.
2008年2月25日に英国でレビュー済み
Amazonで購入
This is a film of the WHO,with concert footage,family members,recording sessions,interviews etc from the very early days to the present.I found the insights provided by other stars like Sting;U2;Pearl Jam;etc into the music and musicianship of the WHO really worthwhile.To be analysed and dissected by other experts added a very different set of insights into this great band.Sting describing the famous,intricate bass-line of "My Generation";U2 talking about the the guitar virtuosity of Townsend;the drumming of Moon analysed and reconstructed;and the power chords and how they came to be played on many WHO songs,were amazing to watch and listen to.
Some one of these commentators finally summed up the WHO as a band that had a "lead guitarist";a "lead drummer",a "lead bassist" and a "lead singer" and somehow it all worked instead of being a mess.
What a great description of a great band.
Get this dvd and enjoy it and think back to a simpler time.

johnwinslade
5つ星のうち1.0 secondry disc did not play
2019年11月16日に英国でレビュー済み
Amazonで購入
enjoyed main history of who but second disc did not play just kept skipping back. i had bought another copyof history of the who +six quick ones which had the exact same fault i.e. kept skipping back to beginning at the exact same point on the recording. which indicates a manufacturing fault.
続きを読む
役に立った
フィードバックを送信中...
フィードバックをお寄せいただきありがとうございます。
申し訳ありませんが、お客様の投票の記録に失敗しました。もう一度試してください。
違反を報告
レビュー を日本語に翻訳する
その他の国際レビューを読み込む

SaltySunburn
5つ星のうち5.0 The Extras are better than most DVDS!
2008年1月25日に英国でレビュー済み
Amazonで購入
What a great DVD this is. A perfect companion to 'Kids' and 'Maximum RnB'. With most of the footage commercially available I would rather hear some frank and up to date interviews for a change. As I said the extras are great, offering an insight into each individual members playing. I must say that I never realised that Pete Townshend's playing was influenced by Flamenco but hey, there you go! There's also the recording session for 'Real Good-Looking Boy' which was the first for 23 years. Well worth spending your hard-earned shekels on, a definite 5 stars.
続きを読む
4人のお客様がこれが役に立ったと考えています
役に立った
フィードバックを送信中...
フィードバックをお寄せいただきありがとうございます。
申し訳ありませんが、お客様の投票の記録に失敗しました。もう一度試してください。
違反を報告
レビュー を日本語に翻訳する

We have just been to see the Who a couple of times on their recent tour, first time since way back in the 70's when the original line up was still in place. It was these latest concert attendances that prompted the purchase of this DVD collection.

They are still great now as they were back then.

It was wonderful to see the tribute to the late Moon and Entwistle forming part of the concerts and very touching on the DVD to see RD and PT give heartfelt tributes to them.

Dan
5つ星のうち5.0 Review of the Who's Amazing Journey DVD
2012年7月31日に英国でレビュー済み
Amazonで購入
This DVD box set (2 DVDs) is worth the price for real Who fans. The main documentary film is excellently done, and uses recent interviews as well as old footage to show the band from the four sides of the members, as well as the perspective of several fans, contemporary and later musicians (Sting, the Edge, Noel Gallagher, etc), and even several managers and roadies. Delicious anecdotes, and real insight into the band. It is more than the standard, re-hashed, re-told documentary.

divemasterken
5つ星のうち5.0 Brilliant DVD!
2014年8月30日に英国でレビュー済み
Amazonで購入
Always been a fan of the Who, and after reading reviews of this box set on Amazon, decided to buy. Not disappointed, it's a very moving and honest portrayal of this great band. Well worth the cost, and nice to have as a keepsake. Amazon delivery was very quick, highly recommended.
続きを読む
役に立った
フィードバックを送信中...
フィードバックをお寄せいただきありがとうございます。
申し訳ありませんが、お客様の投票の記録に失敗しました。もう一度試してください。
違反を報告
レビュー を日本語に翻訳する

Scot in Oz
5つ星のうち4.0 Great doco
2012年6月15日に英国でレビュー済み
Amazonで購入
This is a fabulous review of an awesome band. Not afraid to cover their darker periods in their history.

Has some great archive footage, and the bonus documentary on recording the 2 new songs for their greatest hits album is very interesting too.
続きを読む
役に立った
フィードバックを送信中...
フィードバックをお寄せいただきありがとうございます。
申し訳ありませんが、お客様の投票の記録に失敗しました。もう一度試してください。
違反を報告
レビュー を日本語に翻訳する