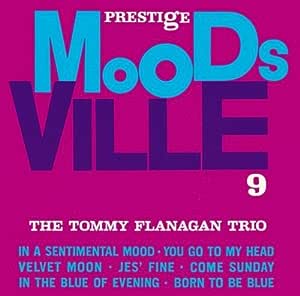 T. Weber
5つ星のうち2.0 Hinky Tracks
2019年1月16日 - (Amazon.com)
形式: CDAmazonで購入
Something is out of sorts with either the original or re-master. Most noticeable on Track 3, "Velvet Moon"; high frequency feedback or other distortion that is impossible to ignore. The trait is less noticeable on other tracks but this track is the worst. I thought that there may be a CD pressing issue but the same distortion occurs when I stream from Amazon Music. That eliminated the possibility of a CD or CD player error. Also listened via headphones versus speaker - no change. No issues with the rest of the signal chain either.
A shame that such a fine group of musicians and their music is compromised by whatever the root cause of the distortion was. This will not keep me away from more Tommy Flanagan music but it does provide warning that you should listen to your purchase as soon as you receive it. I waited too long and doubt I can get a refund now.

Bob Carpenter
5つ星のうち5.0 In a laid back piano bar
2002年2月8日 - (Amazon.com)
形式: CDAmazonで購入
Tommy Flanagan must have been an obvious choice for the Prestige Moodsville series, which the liner notes explain were intended to provide a a compilation of performances where "imporant names in jazz can just relax and play the tunes they like" and where the "emphasis will be on relaxed, thoughtful and expressive jazz, after hours music if you will". In this set, Flanagan and his trio play a selection of little known 1930s ballads. In addition to Flanagan on the ivories, his trio features Tommy Potter on bass, who adds just a touch of depth and movement, and Roy Haynes on drums, who treats the skins to a light touch with the brushes. The fourth track, Duke Ellington's "Come Sunday" is a beautiful solo piano number. The penultimate song, "Jes' Fine", is the only song written by Flanagan. It picks things up just a touch and adds some counterpoint and a more insistent bass line. But then Tommy brings us back to the mellow mood in which we started with the final song, another Duke Ellington number, "In a Sentimental Mood".
Rudy van Gelder captured the exquisite sound in his usual manner by setting up a couple of high-fidelity microphones and letting the players and room speak for themselves. If I close my eyes, I'm in the Village Vanguard listening to him live.
My only complaint is that the album is only 34 minutes long. When I'm in the mood for Tommy Flanagan, I could listen to him and his trio all night. I'd suggest another Tommy Flanagan Trio album, "Overseas", as an excellent complement to this one. Or catch Flanagan in different surroundings on any number of early Dexter Gordon recordings or on Sonny Rollins' "Saxophone Colossus", which is perhaps my all time favorite be-bop album.

Donnie The B
5つ星のうち5.0 Tasty Piano-Led Trio
2008年5月23日 - (Amazon.com)
形式: CDAmazonで購入
Tommy Flanagan laid down some of the best piano sounds around. This trio session with Tommy Potter on Bass and Roy Haynes on Drums was recorded almost exactly 48 years ago in 1960.
The Prestige Moodsville series was not meant to be just "Mood" music, but much of it can certainly perform that function. These mostly laid-back cuts stand up to serious listening as well as being great "bachelor pad" music. The sound is quite good throughout - nicely re-mastered.

Breck Breckenridge
5つ星のうち5.0 My absolute favorite Tommy!
2008年5月23日 - (Amazon.com)
形式: CDAmazonで購入
This Tommy Flanagan is short and sweet. It is the most listenable jazz I've ever heard. Just a simply piano, bass and drums. But what sound? What exquisite jazz "thinking"! This is 'easy listening' with quality and intelligence.
続きを読む
2人のお客様がこれが役に立ったと考えています
レビュー を日本語に翻訳する