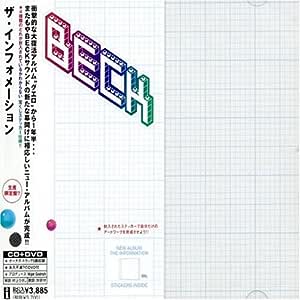 Produced by Nigel Godrich. Bonus Tracks for Japan Include Bonus Tracks "Inside Out", "The Girl that I Know" and "oh Mania". Also Includes an Bonus Dvd (Ntsc/ Region 0).

Bagpuss
5つ星のうち5.0 For Your Information
2016年3月3日に英国でレビュー済み
Amazonで購入
The best Beck album I've heard - mindblowing production and a demented, funk-laden, groove-happy mishmash of sonic and lyrical playfulness. People fixate on Sea Change and Odelay - fine albums - but this is something else! The oddness is just as wild as his earlier efforts, but there is a delicious maturing of sound and vision that make this a very satisfying listening experience. The extra tracks are also excellent (sometimes these tend to be tagged on to make you buy a special edition after you've already bought the original release) - This Girl That I Know is a comical slice of random dating ephemera. The samples used throughout the album are also classy and eclectic as ever. And the stickers are cool. Yum.
続きを読む
1人のお客様がこれが役に立ったと考えています
違反を報告
レビュー を日本語に翻訳する

R. Rooksby
5つ星のうち4.0 Strange Apparitions
2011年12月31日に英国でレビュー済み
Amazonで購入
I'll keep this brief... I've been a Beck fan since the off (well, since "Loser" anyway) & followed his career very closely until the maudlin Sea Change. Before you start punching your monitor & screaming "Classic!", "Idiot!!" or, possibly, "What a classic idiot!!", don't misconstrue me here... I l.o.v.e. Sea Change, but it seemed like it might be Beck's creative zenith to me. When, after it's unfairly lukewarm critical reception, he hooked up with The Dust Brothers again, for the overcooked/overlong Guero, I figured he might've finally run out of steam. The minor diversions offered by water-treading remix projects like The Gameboy Variations & Guerolito only seemed to confirm that.

So, when The Information originally appeared, hot on Guero's heels - another deluge of songs in a variety of slightly confusing formats & tucked inside a slightly "whacky" (yes, I hate that word too) sleeve - I told myself "ENOUGH!" & gave it a wide berth. It wasn't until I heard the brilliant - & relatively brief - Modern Guilt LP that I decided to risk disappointment & give The Information a go. I bought the 3 disc version, as it was going for a song, & was utterly dazzled. As a couple of other folk have hinted on here, it's arguably Beck's magnum opus. Personally, I still rate Mutations as his finest album to date, but it's difficult to compare the 2 as they're so completely different. The Information is a very electronic record, sometimes deceptively so (it's mix of electronic & acoustic instrumentation is incredibly skillful), & the production is very dense in places. Frequently, there seems to be a lot more going on beneath the surface than is initially apparent, making it a record that repays repeated plays.

The Information strikes me, lyrically, as being Beck's reaction to his Scientologist beliefs & upbringing (apparently, he's been involved with the movement for most of his life). The lyrics, noticeably more "cosmic" than usual, are often delivered in an unsettling android-like monotone, but are some of his finest ever. A handful of songs disappoint - "Nausea" & "1000bpm" sound like heated-up Guero hangovers for starters - but several are his best yet. The unearthly, eerie drift that underpins tracks like "Solider Jane", "Movie Theme" & "Cellphone's Dead" is genuinely haunting. The latter's Michael Gondry-directed video perfectly captures the feeling I'm talking about.

n.b. Curiously, "Timebomb", released as a single to promote the album, isn't actually on it (even the 3 disc version omits it). Curiouser still, it would've been one of the worst tracks on it if they included it.

The Information is a sprawling, slightly chaotic, fantastical brainfart of an album... & I heartily recommend it.
続きを読む
4人のお客様がこれが役に立ったと考えています
違反を報告
レビュー を日本語に翻訳する

Mr. S. Morris
5つ星のうち5.0 One Track Off Another Masterpiece
2011年12月16日に英国でレビュー済み
Amazonで購入
Just how good is Beck? He is just not capable of producing a bad album and I have them all. This is the last one I bought from his back catalouge. The one I bought previously was Sea Change which is absolutely outstanding and I think his best. But it is a very difficult one to call as all his albums are absolutely brilliant and unique as Beck's ability to compose and deliver such a massive variety of song styles is why I'm totally hooked and a big big fan. I just hope that soon he will deliver a brand new release. Anyhow 'The Information' is more like Odelay and Modern Guilt than Sea Change and Mutations. It has more rap and funk elements and synth and far less blues guitar based songs. The album is funky and quirky and quite weird too - especially with the scientology elements towards the end - I'm okay with that actually and happy enough to fly off in a spaceship any day as long as I don't have to pay any council tax when I land - cool, fine by me, let's go - engage! My only critisism of 'The Information' is track 4, I think it's 'Strange Apparition' and it's not Beck's best and really is an 'odd man out' track, and to me does not fit at all with the production of the rest of the album - it's crap basically and sounds like a crappy Lynard Skinard 'country honk' type thing which I can basically do without - so I skip the track out (I know - how criminal is that) when playing the CD cos everything else just flows fantastically.
続きを読む
2人のお客様がこれが役に立ったと考えています
違反を報告
レビュー を日本語に翻訳する

Rosey Lea
5つ星のうち5.0 Beck for Beginners
2010年2月24日に英国でレビュー済み
Amazonで購入
As a huge Beck fan, this is the album I always recommend to people who say "Beck? Heard of him, but don't really know/get his stuff".
Listen to the first 6 tracks and you've pretty much got a synopsis of Beck's music. (Try to play it out loud on CD, rather than compressed into MP3 on a cheap player, to get the full effect).

As well as being a Beck primer this is also one of his best albums. There's a lot of variety here and the trademark Beck scratch lyrics turn up on cue, so you can just play the tracks you're in the mood for. But it's also great played from start to finish as a concept album with the recurrent themes playing hide and seek through the tracks.

My favourite Beck album remains  Modern Guilt  (and I still hate  Midnite Vultures  no matter how hard I try to like it]!), but for me The Information has to be the definitive Beck album.
続きを読む
2人のお客様がこれが役に立ったと考えています
違反を報告
レビュー を日本語に翻訳する

Wyvernred
5つ星のうち5.0 Certainly different from the Sea Change album!
2019年1月14日に英国でレビュー済み
Amazonで購入
Another new musical era from Beck - Cellphones dead song is very addictive and I think it uses a sample from a Herbie Hancock song - not one of my favourite beck albums but good to have in my collection nevertheless.
続きを読む
違反を報告
レビュー を日本語に翻訳する
すべてのレビューを参照します
Amazonプライム会員ならお急ぎ便、日時指定便が使い放題
さらに、映画もTV番組も見放題。200万曲が聴き放題 。クラウドに好きなだけ写真も保存可能。
> プライムを無料で試す