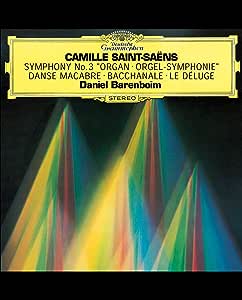 Speedbyrd
5つ星のうち5.0 All Around Top Notch Recording - Packaging Questionable
2018年11月26日 - (Amazon.com)
Amazonで購入
This has long been my favorite rendition of the Organ Symphony No. 3. Excellent pacing and sound. Had this on vinyl when it first came out. Now it's on CD and I keep going back to it. The Bacchanal is peppy and energy. Stunning.

I would hoe that Amazon would package CD a little more carefully. Those thin plastic mailer do not ensure against cracked cases. Fortunately I have extras but the packaging does need some work.

pianoreview
5つ星のうち5.0 A Real Show Stopper
2017年5月13日 - (Amazon.com)
Amazonで購入
Arguably the best sounding (and a fine performance) Organ Symphony made. The finale is staggering, and this issue is an improvement on an already good sounding version from about 30 years ago. This is a must for a stereo system, and the only other recording than the Living Stereo Munch recording to have.
続きを読む
6人のお客様がこれが役に立ったと考えています
レビュー を日本語に翻訳する

John K. Gayley
5つ星のうち5.0 we all have our own favorites for the 3rd symphony...this one is mine
2012年4月14日 - (Amazon.com)
Amazonで購入
I've owned several versions of the 3rd, all of which have been very good. I adore the old Munch version on RCA, But still find this one on DG is the best. Barenboim's Part 2 is particularly exciting, and the interplay between CSO and Gaston Litaize (done both blindly and intercontinentally, as it were) is first rate. I love playing it at full blast on the highway in my car. Really annoys those driving next to me playing dubstep when they get drowned out.

In my wild idiotic youth when this recording was only on vinyl I found the 2nd part so exciting I wore out side #2 on the record, and never bothered with the first half! Since then, I've grown to love the first half perhaps even more, and here is where I personally feel Barenboim brings out more than many others. The orchestral colors are just so well painted and limpid, and the piece just...moves along with typical Saint-Saensian (is that a real phrase?)mastery.

The other added selections are fine, but in the case of "Danse" in particular, I think there are much better versions elsewhere, including Dutoit on Decca (who is superb, in fact, for all Saint Saens' clever tone poems.) but I bought the Barenboim for the symphony, and its for the symphony that this gets 5 stars.

Mike
5つ星のうち5.0 A Saint-Saens Tour de Force
2015年1月31日 - (Amazon.com)
Amazonで購入
I recently upgraded my 2 channel system and was curious to see how this version and the Levine version sounded. In both, the organ was in another location but it is blended in seamlessly. I found the organ part played by the blind French organist, Gaston Litaize on the organ at Chartres, and the organ sound in the Barenboim 1976 analog performance with the Chicago Symphony Orchestra, remastered for CD, was the more impressive and I found the whole performance a little more dramatic, although a little harsh sounding at times, possibly due to the remastering process.
The orchestra for the balance of the CD is the Orchestre de Paris. The Bacchanale from Samson et Dalila is taken from the 1978 opera recording and is very effective and well played. This is the first time I have heard the Prelude from Le Deluge, so I have nothing to compare it to. It is a 1980 performance with Alain Moglia. Finally, I enjoyed the 1980 Danse Macabre. It is a good performance but I have heard other performances which were more exciting.

C. Smith
5つ星のうち5.0 Very nice
2015年7月7日 - (Amazon.com)
Amazonで購入
One of the best recordings of the Saint-Saens Organ Symphony—not a masterpiece, certainly, but still impossible not to love. For its garishness and charm, if not its musical cohesion. The recording cobbled together the Chicago Symphony, playing in the US, with an organ track recorded at one of the great French cathedrals that Saint-Saens knew and loved—i.e. the perfect organ sound for this piece. Despite the awkwardness of this arrangement, it works great!
続きを読む
4人のお客様がこれが役に立ったと考えています
レビュー を日本語に翻訳する
Amazon.comのカスタマーレビューを見る(17) 5つ星のうち4.8
Amazonプライム会員ならお急ぎ便、日時指定便が使い放題
さらに、映画もTV番組も見放題。200万曲が聴き放題 。クラウドに好きなだけ写真も保存可能。
> プライムを無料で試す