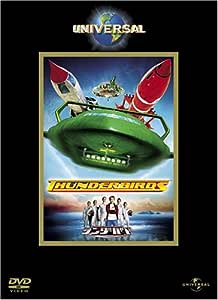 Trevor Willsmer
5つ星のうち1.0 A new kind of punishment for bad children
2005年11月16日に英国でレビュー済み
Amazonで購入
I've always thought that most huge box-office flops usually have something to recommend them, but after the remake of Around the World in 80 Days and Thunderbirds, I'm beginning to doubt it. For those not familiar, it's based on a puppet show about a family of astronauts who use state of the art rockets, spaceships and subs to rescue people from various disasters (falling bridges, stricken planes, burning buildings, etc) each week. Well, the puppets are gone (replaced by far more lifeless teenagers), and so is the premise - only one ineptly staged rescue and a plot shamelessly ripped off from Spy Kids without any signs of imagination, wit or entertainment. Young Alan Tracey feels left out of all the rescuing we never see the other Traceys do because dad won't let him play with a real rocket until he passes his exams. Grounded on a beautiful tropical island (some punishment!), his chance to shine comes when the rest of the family - a bunch of identikit bleach-blondes who look like a gay neo-Nazi boy band without a single bit of characterisation between them - are stranded in space and he has to have the day by, er, running around the jungle, making a phone call, firing a hose at the inept comedy relief villains and dousing them in gunk for bad measure.

The good points are few and far between. One of them is that the film is mostly in focus. The other is they all got to go to the Seychelles, which looks nice.

The bad points: where to start? Ben Kingsley's career lowpoint performance? The aforementioned inept comedy relief sidekicks who would disgrace the Children's Film Foundation at its worst? The almost complete lack of action or effects in a $70m sci-fi film? The terrible script, the lifeless direction, the odious moralising? But most of all is the fact that the film is so patronising in every possible way. Forget the life lessons and off the peg sentiment, this is a movie aimed straight at the under-eights by people who know they're making a kid's movie and are constantly talking down to their intended audience, throwing in fifth-rate jokes and routines that would insult most children who had only recently mastered the art of speech. This film could replace being sent to bed early without their dinner as parents' favourite punishment for kids.

At one time the biggest flop in British film history (it didn't even cover the cost of prints and marketing), it's just about watchable if only as an object lesson in how NOT to make a summer movie.
続きを読む
4人のお客様がこれが役に立ったと考えています
違反を報告
レビュー を日本語に翻訳する

Eddie m
5つ星のうち4.0 NOT BAD - BUT NOT GREAT.!
2016年1月14日に英国でレビュー済み
Amazonで購入
DECENT FILM. THE INTERNATIONAL RESCUE PLANES ARE A BIT NAFF THOU - ESPECIALLY THUNDERBIRD 2. LADY PENELOPY'S PINK ROLLS ROYCE IS NOW A FORD. NAH.! NOT AS GOOD AS THE ORIGINAL. PARKER THE BUTLER.! I PREFURE THE PUPPET FROM THE 1960s THERE'S MORE LIFE IN HIM.! AND AS USUAL NOBODY IS SWIMMING IN THE POOL OR SUNBATHING UNDER THAT TREE WHEN THE SPACECRAFTS COME OUT TO SAVE THE WORLD.?
HARTY FARTY PLOT. BUT WORTH ADDING TO YOUR MOVIE COLLECTION.!
続きを読む
違反を報告
レビュー を日本語に翻訳する

Panduszka
5つ星のうち4.0 Fun film for the young and young at heart
2016年6月30日に英国でレビュー済み
Amazonで購入
This movie is a lot of fun. Don't think too deeply about the plot line. Popular with ages 5 to 11 in my experience.
続きを読む
1人のお客様がこれが役に立ったと考えています
違反を報告
レビュー を日本語に翻訳する

geralddelapascua
5つ星のうち4.0 Good film, the kids enjoyed it
2015年11月2日に英国でレビュー済み
Amazonで購入
Good film, the kids enjoyed it, it's always fun for kids when the children in the film are the real heros. I'm surprised they haven't made more, I guess it didn't make enough money to justify it, but it's perfectly fine to quote the great Mark Kermode himself,
続きを読む
違反を報告
レビュー を日本語に翻訳する
すべてのレビューを参照します
Amazonプライム会員ならお急ぎ便、日時指定便が使い放題
さらに、映画もTV番組も見放題。200万曲が聴き放題 。クラウドに好きなだけ写真も保存可能。
> プライムを無料で試す