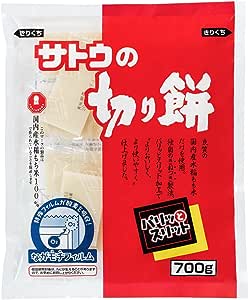 Masahiko Yokouchi
5つ星のうち5.0 Good Products
2019年11月29日にカナダでレビュー済み
Amazonで購入
Kirimochi usually start to get moldy in a several days, however this one does not get moldy at all. I don't know what the trick is, but able to enjoy eating it for long time. It's expensive but maybe worth it.
続きを読む
違反を報告
レビュー を日本語に翻訳する

Jeff Delmonico
5つ星のうち4.0 Dear American Palates,
2019年5月15日にアメリカ合衆国でレビュー済み
Amazonで購入
OK, I got these because I like a lot of other Japanese food as well as the culture and these looked delicious in several Youtube videos. They arrived really quick and for 700g there are A LOT of individual bricks in the package, I counted 14.

TL;DR at the bottom.

Prepared: I don't have the small grill that you would use for cooking them traditionally. But, I've seen they can be cooked just as well in a frying pan. I broke a brick into 4 pieces, it's already scored for you, and browned all sides until they puffed up.

Smell: Honestly, they smell like nothing when raw and not cooked. After cooking, the outside smells of subtle burnt popcorn. Not a big deal but I know some people can't stand that smell. It's not very strong and you almost have to put your nose very close to even smell it.

Texture: Here is where I think most American palates will be turned off. The outside is nice and crispy. The inside, well.... its a mix of gum and melted mozzarella cheese. It can be very off-putting the first time you try it. It's also very sticky and it can stick to your teeth.

Taste: I tried one plain first, and honestly, it has almost no flavor. It's a very very subtle rice taste, naturally. Then I tried one dipped in soy sauce, the saltiness is a good contrast to the otherwise plain flavor. Then I tried one soaked in soy sauce and by far this was the best one. Unfortunately, since the kirimochi has little to no flavor it's essentially a flavor vessel of whatever you put on it. My guess is the best way to eat these would be in a thick sauce of some sort, preferably spicy, in which they have time to soak up all the flavors. With soy sauce alone the saltiness can be a bit overwhelming with no other flavor to go with it.

Conclusion: These might be an acquired taste, especially if you are a "texture" person. I don't see myself eating these all the time. However, I will give them a second chance with a very flavorful sauce.

TL;DR - Inside texture is a mix of gum and mozzarella cheese. Very little to no taste put them in a thick flavorful sauce.

If you don't speak Japanese, you might want to check out YouTube videos or the internet on how to prepare this product.
続きを読む
5人のお客様がこれが役に立ったと考えています
違反を報告
レビュー を日本語に翻訳する

Mimi Lee
5つ星のうち4.0 I will have to try again with a different one and if it works better I will update my review
2017年2月24日にアメリカ合衆国でレビュー済み
Amazonで購入
Sadly these are not sliced very thinly, you have to do that yourself.

I originally bought these to make moffles in my waffle iron but it's a little tricky to slice them. It's not hard and maybe it's just my knife. I will have to try again with a different one and if it works better I will update my review.

J. aronson
5つ星のうち5.0 Great treat!!
2016年5月23日にアメリカ合衆国でレビュー済み
Amazonで購入
I read about this in Dave Aspreys Bulletproof Diet book and I had to try it! Super glad I did, you just bake in the oven low heat for a little while and I add Ghee and coconut sugar to it and Yummmmmmmm!!!!!! But make sure it gets crunchy or it isn't as tasty.
続きを読む
2人のお客様がこれが役に立ったと考えています
違反を報告
レビュー を日本語に翻訳する
すべてのレビューを参照します
同様の商品をご覧になりませんか？ こちらのリンクで参照ください。サトウの切り餅