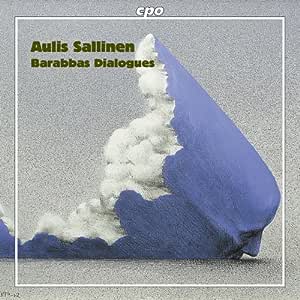 J Scott Morrison
5つ星のうち5.0 A Moving Song Cycle from a Finnish Master
2005年8月5日 - (Amazon.com)
Surely Aulis Sallinen (b.1935) is one of the great composers of our day. I've been following his works for thirty years and have never been disappointed. The cpo label has been issuing CDs that look to eventually comprise much of his enormous output, including the symphonies, chamber music, and now this song cycle for five singers, narrator and chamber ensemble of seven instruments, all led by the distinguished pianist, now conductor, Ralf Gothóni (a winner of the highly prized Gilmore Artist Award in 1994). 'Barabbas Dialogues' was composed to a commission from the Naantali Music Festival, Finland, and this recording was made there in June 2004. The singers and instrumentalists are all Finnish, few of them well-known (although Gothóni also plays the piano with the ensemble, and the cellist is the highly acclaimed Arte Noras). All of the musicians are functioning at a high international level of accomplishment. Baritone Petteri Salomaa sings Barabbas. He sounds a good deal like one of my favorite Finnish singers, the incredibly talented Jorma Hynninen, and I had to check the CD's booklet to make sure it wasn't he that I was hearing. The two female singers, mezzo Riikka Rantanen and soprano Mari Palo, are equally outstanding.

Sallinen had a few years earlier written a chamber piece called 'Barabbas Variations' for solo accordion and string orchestra and it uses some of the same materials as the present work. 'Barabbas Dialogues' also includes an accordion in the chamber ensemble.

In the story of the Passion of Christ, Barabbas (actually named Jesus bar Abbas), as most will recall, was the insurrectionist and murderer (member of a Jewish group attempting to overthrow the corrupt and oppressive government of Pontius Pilate) who was selected over Jesus, in a Passover custom, to be spared execution by a vote of the crowd of onlookers. The text for this wholly tonal, sparely orchestrated but richly melodic work, is taken from a longer poem by Lassi Nummi. Nummi, a distinguished Finnish poet (and brother of the equally distinguished composer Seppo Nummi, whose music deserves to be better known; he has written some lovely songs to verses by his poet brother), collaborated with the composer in cutting the text down to manageable size and recasting it in the form of seven dialogs between the soloists, each of whom represents a specific character (Barabbas, a Woman, Judas, Youth, a Maiden) interspersed with spoken narration that ties it all together. The performances could not be better. One is concerned that this powerful work will languish because its text is in a language (however lovely) that is rarely spoken or understood outside Finland. One hopes a singable English or German translation will be fashioned.

Even if you do not understand Finnish, there are side-by-side English and German translations printed in the accompanying booklet, as well as charming and informative notes by the composer who says, 'Is "Barabbas Dialogues" a song cycle, a chamber oratorio, a piece of musical theater or something else? I haven't troubled my head with this question. In the best of circumstances, a work of art creates its own world.' This one certainly does.

Strongly recommended to those curious about what is coming out of what must surely be the most musical nation on earth, Finland.