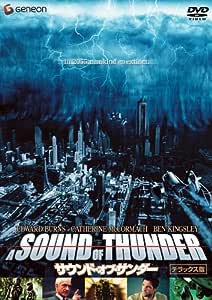 Trevor Willsmer
5つ星のうち3.0 Enjoyable throwback to 50s B-movies best viewed with no expectations
2006年8月25日に英国でレビュー済み
Amazonで購入
Ray Bradbury's classic short story A Sound of Thunder popularised the Butterfly Effect theory as time-travelling dinosaur hunters inadvertently change the future by unwittingly bringing something back from the past only to find it impossible to go back and change things before they become extinct - the kind of pitch that sounds like it was made in high concept movie heaven. So how can an idea that good turn into a fiasco that sits on the shelf for three years before escaping to a handful of theaters? Well, the fact that the poster alone boasts 13 producers credits and nine production companies and the trailer credits two writers who aren't billed among the three on the finished film, it's pretty obvious that too many chefs have been working on this primordial strew. Then there are the endless production problems - the sets being flooded in Czechoslovakia, the company going bankrupt after a series of financial scandals and lawsuits, the lack of money to complete the special effects which are a few passes away from being finished but still acceptable if you're in a forgiving B-movie mood (the biggest problem is the poor integration with backgrounds), the departure of Renny Harlin and Pierce Brosnan in favor of the even less inspiring Peter Hyams and Edward Burns... this one never stood a chance.

But the weirdest thing? It's a really enjoyable movie. Not a great movie by any stretch of the imagination, but certainly a fun one. It's best to think of it as a modern 50s sci-fi B-movie, the kind of thing that Ray Harryhausen might have worked on in his black and white days had Sam Katzman ever bothered with a halfway decent script. Had this come along around the time of Jurassic Park, it probably would have been embraced, but since then a mixture of dino and cgi overkill has moved it to the bottom of the food chain. Yes, the effects are variable to put it mildly and the ending a little underpowered (and the attempt at humor there spectacularly flat) and it could have benefited from a more charismatic star than the adequate but uninspiring Edward Burns to carry it. Still, Ben Kingsley - sorry, Sir Ben Kingsley, as the cast list reads - is enjoyably hammy before his character disappears, there's a nice little Capricorn One joke in there as well and it's all certainly much more fun than Hyams' previous creature feature The Relic. And it has man-eating Baboonosaurs! How can you not love a film with man-eating Baboonosaurs?

LMK
5つ星のうち4.0 Enjoyable hokum!
2012年11月2日に英国でレビュー済み
Amazonで購入
This film was pretty silly and yet enjoyable. Not brain-taxing at all, full of plot holes and daft science, but fun nevertheless. The plot centres around a "time safari" where clients can go back to hunt dinosaurs. A tiny accident then causes a "ripple" effect, with changes happening in modern times. The "time waves" where the city gradually changes more and more are good fun, and the special effects mostly aren't bad (although there are some seriously weird critters and the "ordinary street" scenes aren't very convincing). Surprised to see Ben Kingsley in this - he didn't look overly convinced either! I read somewhere that this is a modern B-movie, and I think that's a perfect description. If you enjoy some brain-candy and a good rubbish film, then this is for you. If you're expecting top acting and a plot that hangs together, look elsewhere!
続きを読む
2人のお客様がこれが役に立ったと考えています
役に立った
フィードバックを送信中...
フィードバックをお寄せいただきありがとうございます。
申し訳ありませんが、お客様の投票の記録に失敗しました。もう一度試してください。
違反を報告
レビュー を日本語に翻訳する

Scaroth, Last of the Jagaroth
5つ星のうち3.0 Deafening silence
2015年10月27日に英国でレビュー済み
Amazonで購入
Basically a ‘straight-to-video’ adaptation of Ray Bradbury’s seminal short story ‘A Sound of Thunder’, this attempts to stretch a slight but zeitgeist-capturing classic into a full-length feature film, with predictably lamentable results. It says something that the most memorable aspect of this film is Ben Kingsley’s Malcolm Mcdowell-esque fright wig, and that the only other cast member of note is ‘that guy from The Mummy who gets killed about half-way through’.
続きを読む
役に立った
フィードバックを送信中...
フィードバックをお寄せいただきありがとうございます。
申し訳ありませんが、お客様の投票の記録に失敗しました。もう一度試してください。
違反を報告
レビュー を日本語に翻訳する

Pagespinner
5つ星のうち4.0 A pleasing and shamefully underrated adaptation
2010年5月31日に英国でレビュー済み
Amazonで購入
I have just read Ray Dorrity's excellent review, and decided to write this in the hope of getting this neglected film's star rating up, and of persuading others to view it.

Ray Bradbury's groundbreaking story is about a company which offers hunters (here punters) the opportunity to travel back in time to shoot dinosaur, a safe thing to do as the creatures were destined to die anyway at the time of shooting. However, should anybody disobey instructions and step off a designated path then the future could change. Bradbury's description of the Tyrannosaurus Rex - which produces the title sound, although it is replaced by an allosaurus in the film - is a masterpiece of English writing, with astonishing multilayered imagery, which raised the bar for describing dinosaurs in literature. The story has lent itself well to various comic book interpretations, where pictures are worth a thousand words, starting with Al Williamson's EC comics adaptation in Weird Science-Fantasy No. 3.

Peter "Timecop" Hyams has tried in his film to do for "A Sound of Thunder" what Ridley Scott did with Philip K. Dick's "Do Androids Dream of Electric Sheep?" and Paul Verhoeven with Dick's "We Can Remember it for You Wholesale" in turning the stories into "Blade Runner" and "Total Recall" respectively - that is, by treating the source respectfully but at the same time expanding it into a cinematic experience. Inevitably much material has to be added, and the subtle (but chilling) change to the future which is the twist at the end of Bradbury's story becomes waves of great changes through the film - and yet these have been thought out carefully and are consistent with the original.

Where he (or, I should say, the studio) falls down to some extent is in the effects, which are hardly B movie but are more than a little inconsistent - check out the back projection of traffic loops in the early sequences - but there are, as Mr Dorrity implies, many impressive set pieces and often highly convincing creatures.

If the same amount of money had been lavished on "A Sound of Thunder" as the films mentioned above, we would, I think, be regarding it as a sci-fi classic. It has class British actors in main parts and little let-up in the action. And though I don't know what Bradbury's own opinion is of the film (I do know that the original director was replaced by Hyams in deference to the author) I did feel that if Al Williamson's version pleased him, this should have too.
続きを読む
1人のお客様がこれが役に立ったと考えています
役に立った
フィードバックを送信中...
フィードバックをお寄せいただきありがとうございます。
申し訳ありませんが、お客様の投票の記録に失敗しました。もう一度試してください。
違反を報告
レビュー を日本語に翻訳する

Jack Eason
5つ星のうち4.0 My review of "A Sound of Thunder"
2011年5月25日に英国でレビュー済み
Amazonで購入
Science Fiction Film - adapted for the silver screen from a short story by Ray Bradbury.

It's the butterfly syndrome become reality. Change one tiny thing in any given time period and everything changes.

Why? Simply because a frightened panicked fool stepped off the path and in so doing, killed a primitive butterfly, sixty-five million years in the past.

As a consequence of this seemingly minor act, time waves keep on washing over present day Earth changing everything, returning the Earth back to the time when dinosaurs ruled.

Somehow the error has to be rectified.

While Bradbury's story is highly imaginative with a great premise, sadly the acting in this adaptation leaves much to be desired. But setting aside the cast of nonentities for the moment with the token big named actor (Ben Kingsley) thrown in to attract movie goers, I enjoyed it immensely.

Will I watch it again - yes? But then I am a sucker for true Sci-Fi.

If Ray Bradbury were still alive today, would he enjoy the way the makers of this film interpreted his short story? Who knows...

Tanya
5つ星のうち1.0 Dvd not as advertised
2019年6月24日にカナダでレビュー済み
Amazonで購入
Movie and dvd cover is in French even if the original movie was made in English and the product is advertised that it's in English.. makes me wonder if it's a real dvd?
続きを読む
役に立った
フィードバックを送信中...
フィードバックをお寄せいただきありがとうございます。
申し訳ありませんが、お客様の投票の記録に失敗しました。もう一度試してください。
違反を報告
レビュー を日本語に翻訳する
その他の国際レビューを読み込む

Sam Ellis
5つ星のうち2.0 Sound of Thunder
2009年7月10日に英国でレビュー済み
Amazonで購入
If you REALLY enjoyed the short story by Ray Bradbury then don't watch this film! However, if you treat it as stand alone entertainment then it has a role to play. The plot extends the original short story beyond recognition by imagining the consequences of the Time Safari's return to present day and hurtles its rather predictable characters into the realms of bizarre cult disaster/horror (wannabe) epic. Characters walking along a busy street that is clearly a backdrop, plastic dinosaurs that very kindly wait until their victims have managed to get away before they lunge, and mutant apes with incredible incisors, all play their part in the fun. Narrow escape follows narrow escape, then there are several more (easily time for you to pop out and make cups of tea without missing any serious developments), until, finally, the film reaches its conclusion. Yes, you probably anticipated it correctly! Would I watch it again? Yes! Would I miss a moderately interesting night out to do so? Probably not!
続きを読む
1人のお客様がこれが役に立ったと考えています
役に立った
フィードバックを送信中...
フィードバックをお寄せいただきありがとうございます。
申し訳ありませんが、お客様の投票の記録に失敗しました。もう一度試してください。
違反を報告
レビュー を日本語に翻訳する