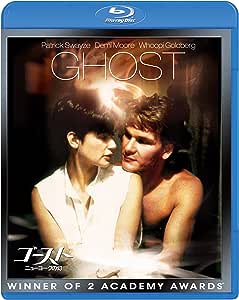 Angie
5つ星のうち5.0 Love can sometimes live beyond all boundaries...
2015年6月11日に英国でレビュー済み
Amazonで購入
At least, that's what 'Ghost' is trying to tell us. If love is strong enough, it can exist even after death, even when all seems lost. Of-course, there's no real reassurance anything exists after death, including love, but since people need desperately to believe there is still something out there left of their soul after the body fails to continue its journey upon earth, it's understandable why this movie suggests that some souls might still wander among us as ghosts - especially when their end wasn't exactly expected. Either way, whether you chose to believe or not, this is simply terrific entertainment, and one that can no doubt be considered a classic these days.
I don't know why I didn't get to watch 'Ghost' earlier, but as they say, it's better late than never. For the few of those who haven't seen it yet (mainly the younger generation, I assume) I'll just say there is a big chance this is the best Demi Moore\Patrick Swayze movie you'll get to see, and I'm still waiting for something else to surpass the hypnotizing tension and mystery atmosphere offered here, the fact Patrick Swayze's immense suffering feels so real even though in his new form he's not suppose to suffer any more; Also, you'll get to see Whoopi Goldberg in one of her best roles up until now, and personally I feel that here she even exceeds expectations and is better than what she did with her most famous role as Dolores Van-Cartièr\Sister Mary Clarence just a couple of years later (but, if you'll watch closely, I quite sure you'll notice that her celebrated movies about nuns took their inspiration from an interesting scene here).
I must mention the guy that plays Carl (don't remember the actor's name at the moment, but he's simply great). He's doing a fine job as the best friend of Swayze's character who betrays his faith and stubs him in the back (well, something quite close to it, anyway). I felt a bit sorry for him at his loss at first, but as the story developed and the truth was exposed in all its ugliness I hated him with a reason.
Beside those wonderful actors, notice the one who briefly plays the subway ghost. A more tortured soul, so filled with agony and despair even after death, I haven't witnessed in a very long time, or should I say I never witnessed in my life...
To conclude things, you really should not miss this movie, by all means take your time to get to know what the power of true love that lasts beyond the limits of life is, and by the way, if you like this one, make sure as well to listen to the original cast recording of the musical based on the same story - made years later, and through the music you'll relive the sorrow and deep emotions of all the people involved in the story of 'Ghost', a story that seems as fresh and honest (albeit not exactly real in places) as it seemed back then in 1990, when the wonderful feature first reached the big screens and captured the hearts and imagination of millions around the globe. Not just your average ghost story.
続きを読む
9人のお客様がこれが役に立ったと考えています
違反を報告
レビュー を日本語に翻訳する

Customer
5つ星のうち5.0 This is not just fantasy. This is for real.
2020年2月10日に英国でレビュー済み
Amazonで購入
Watch this movie - this is not just a cute story, this is how earthbound sphere of Afterlife actually works, so this is not just a movie to entertain yourself, but to educate too.
For more information watch "Stafford Betty on Afterlife" youtube video.
続きを読む
3人のお客様がこれが役に立ったと考えています
違反を報告
レビュー を日本語に翻訳する

Andrea Lou
5つ星のうち4.0 Poor Blu Ray transfer
2017年1月18日に英国でレビュー済み
Amazonで購入
One of my favourite films. Was sorely disappointed with the Blu Ray quality! So much pixeling, and visible lines through lighter scenes. In fact I really wouldn't waste your money if you already own the special edition on DVD. I am not overly fussy, but I really felt like this was not in HD. The sound was poor, I had to turn the volume up so high, the picture to me was very patchy, you could see the pixels. I have found a few Paramount Bly Ray movies from the 80s and 90s look rather poor compared to other older Blu Rays which have been a great transfer. I own Ghost on DVD, it really was a let down paying out for this on Blu Ray.
続きを読む
6人のお客様がこれが役に立ったと考えています
違反を報告
レビュー を日本語に翻訳する

Extra Features - The Making Of The Classic And Much More.

I so enjoyed watching this excellent film again, it brought back memories. I am very happy with my purchase. M, J, B.
続きを読む
違反を報告
レビュー を日本語に翻訳する

Eva Szoke
5つ星のうち5.0 The perfect movie
2018年12月2日に英国でレビュー済み
Amazonで購入
I loved this film when it was released, but then I haven't seen it for a long time. Re-watching it I realised that this story will never age, it still feels fresh and perfect. The acting is wonderful, story is great and the song of Unchained Melody is such a fantastic choice that anyone who saw this will recognise it instantly.
続きを読む
3人のお客様がこれが役に立ったと考えています
違反を報告
レビュー を日本語に翻訳する
すべてのレビューを参照します
トップへ戻る
Amazonについて
Amazonでビジネス
Amazonでのお支払い
ヘルプ＆ガイド
日本語ショッピングのための言語を選択します。 日本ショッピングのための国/地域を選択します。
© 1996-2020, Amazon.com, Inc. or its affiliates