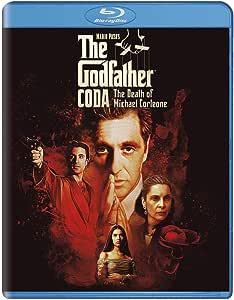 M J P
5つ星のうち4.0 A fine conclusion to a magnum opus..
2017年10月2日に英国でレビュー済み
Amazonで購入
However, I do often wonder what could have been, ie If the studio had not interfered in FFC's vision for the movie.. I actually prefer the title of 'The Death Of Michael Corleone' as Coppola initially wanted, but the studio refused, and insisted on calling it Part 3. I personally would have liked a part 3 set in the 60's, then this one to conclude..

Perhaps Sofia Coppola was the wrong choice for Mary Corleone [no matter, she was sadly and cruely subjected to alot of pressure from producers, studio staff and the media], but I think it depends how you look at her character overall, within the movie (a nervous, introvert 18yr old girl, not accustomed to the world of her father etc) and analyse the story in toto, perhaps on reflection she played the character better than most of us inititally thought. Anyway, Part 3 is such a good story overall, any occasional shortcoming can be disregarded, and the penultimate scene always brings a tear no matter how many times I've seen it.. It's Shakespearean in it's Tragedy.
続きを読む
違反を報告
レビュー を日本語に翻訳する

Lokii
5つ星のうち3.0 Go on you know you want to
2018年3月15日に英国でレビュー済み
Amazonで購入
cannot really say anything about the Godfather III, its not the best of the franchise but it is still better than most movies. All the best story lines are in Parts 1 & 2 but it still grips you when your watch it. Its the poor cousin but still worth a watch, especially if you have invested 6 hours of our life watching the first two, you owe it to yourself to finish the job.
続きを読む
違反を報告
レビュー を日本語に翻訳する