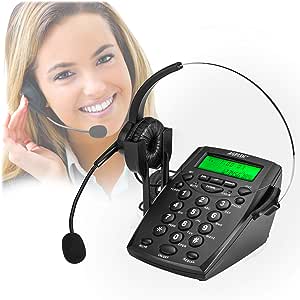 SerenityFL
5つ星のうち4.0 Puts Plantronics To Shame
2014年10月10日にアメリカ合衆国でレビュー済み
Amazonで購入
For just over a year I had a Plantronics T10 that I used for my work at home job. Almost right away there were static issues, it was hard to hear some of the customers, the headset was uncomfortable, and after just a year of use, the on/off button stopped working. Their support was of no help whatsoever and offered me a "discounted" price which was no better than what I could have got here on Amazon. Unimpressed, I started to look for another phone to use.

Found this one, and read the reviews. Some of the reviews left me skeptical as this product is the only product some "reviewers" have left, and a couple of them have only this product and printer ink. I know for a fact that there are places that pay people to make up reviews, so I didn't believe some of the glowing reviews given here. Still, other reviews seemed legit, and the price was better than the Plantronics, so I thought I'd give it a try.

I was working when the package arrived, and I immediately plugged in the phone to the back of my modem, replacing the standard phone I had to use in the meantime, and everything started functioning right away. The date and time were already set, and this phone could not be easier to understand.

On the first call I received on this phone, I realized I could hear the customers so much better than I ever did on the Plantronics, and even when I had to call another department, I didn't have to strain to hear what they were saying. I asked the first caller how the call sounded to them and they said it sounded good. Far better than the complaining I got about static when on the Plantronics.

Some reviews stated the instructions were not well written, but the ones I got seemed pretty straight forward. Perhaps they typed up some new instructions. Everything I need to know is in the small booklet included in the box.

The headset is a lot more comfortable than the Plantronics one. The Plantronics one would leave with me a headache by the end of my shift, but I worked 10 hours straight without the slightest discomfort from the headset for this phone. This phone also has a digital display that includes showing you how long you've been connected or on a call. That comes in handy when you get paid for talk time; it makes it easier to keep track of how long you've spent on each call.

This phone is also more aesthetically pleasing. Sure, it's an "odd" looking phone if you aren't used to this type of phone that many of us who work from home use, but for those who do use these types of phones, it simply looks better, and you seem to get many more options than on the Plantronics T10.

The mic is adjustable, and it can be shaped smaller to fit neatly on the stand at the end of the day. The mute button is not on top of the on/off button like on the T10, so you won't accidentally hang up the phone when pressing mute.

By the way, I have two laptops that I use during work, and this phone is placed directly between both laptops. Not a single bit of static or humming, unlike the other phone I used to have that I had to place as far away as possible from my electronics. This phone handles being mere inches away from not one, but TWO laptops that are on and being used while on the phone.

Granted, the phone is still new, so it remains to be seen how long it works, but compared to the Plantronics, that cost much more than this phone, in the first days of using it, this phone is far superior. I wish it had been available, or if it was, I had known about it, over a year ago before ever getting the Plantronics. I'm bothered that a phone that costs as much as Plantronics barely lasts over a year, and the quality is worse than this phone that was much cheaper. If anything changes in the quality of this phone, or how well it works, I will update this review. At this time, however, I'm actually glad my Plantronics died. Good riddance, I found something MUCH better.
続きを読む
311人のお客様がこれが役に立ったと考えています
違反を報告
レビュー を日本語に翻訳する

kayla
5つ星のうち4.0 Great phone for the price, just memorize the button layout
2017年7月14日にアメリカ合衆国でレビュー済み
Amazonで購入
I bought this phone for my work-at-home position in March 2016. It is now July 2017 and this phone is still going strong. Great sound quality. Amazing price! My only complaint is the numbers on the phone have rubbed off over its 1 year+ use. Otherwise, solid product at a steal.
続きを読む

5つ星のうち4.0 Great phone for the price, just memorize the button layout
2017年7月14日にアメリカ合衆国でレビュー済み
I bought this phone for my work-at-home position in March 2016. It is now July 2017 and this phone is still going strong. Great sound quality. Amazing price! My only complaint is the numbers on the phone have rubbed off over its 1 year+ use. Otherwise, solid product at a steal.
このレビューの画像