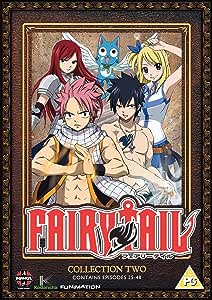 AmazonLover
5つ星のうち5.0 WARNING: COLLECTION 5 ONWARDS IS NO LONGER PRODUCED IN THE UK.
2015年12月30日に英国でレビュー済み
Amazonで購入
I absolutely love Fairy Tail. I find the characters really interesting and, for the most part, likeable. The writing and plot is good, and I really enjoy the lengthy arcs that they do. The characters and writing are good enough to pull you in, and prompt emotional reactions.

The packaging is sufficient and the artwork is nice.

WARNING: COLLECTION 5 ONWARDS IS NO LONGER PRODUCED IN THE UK.

I only recently discovered anime, and as I was due to have surgery, I bought a few DVD box sets to explore whilst I was recovering. I bought Collections 1-4 of Fairy Tail and noticed that Collection 5, according to Wikipedia, was due out in November in the UK.

It never came out.

Two weeks after the supposed release date and Manga UK were still ignoring all of my Facebook and Twitter messages. They also ignored e-mails to info@mangauk.com. They still haven't replied to this day actually.

Apparently, according to many trustworthy sources, Manga UK lost the distribution rights for Fairy Tail in the UK. You will now need a multi region DVD or Blu Ray player and will have to buy from abroad to get Collection 5 onwards (5 having only come out in November 2015). The US version might be cheapest, but it is a DVD/Blu-ray combo and so costs about £10 more than the UK one did. The packaging also includes the addition of a thick blue Blu-ray/DVD combo pack label across the top, which might upset people with OCD who have the first 4 collections with the different, UK packaging.

I did a lot of research into it and found one really, really, really, obscure announcement on an anime/manga website which officially announced Manga UK ceasing production after collection 4. It wasn't easy to find though and they still released collection 4 long after this announcement. For those like me, new to anime, buying these box sets after the one single announcement was made about the discontinuation of region 2 DVDs, then it's a little annoying.

Some US based vendors are listing the US region 1 box sets on the UK Amazon (thank you!).

Lauren Auty
5つ星のうち5.0 "Aye sir" as Happy would say, a great box set
2016年1月17日に英国でレビュー済み
Amazonで購入
The adventures of Natsu, Happy and Lucy continue in this box set. The background to the main characters begins to be told in this box set. We learn more about Grey and his dark past. Lucy the run away celestial wizard, Happy the cat Natsu's ever faithful friend and Natsu himself and the ever powerful Erza and her will to keep everyone in line. This unlikely team set about breaking the curse on an island.
Fairy Tail is a really great anime that's funny, exciting and sometimes heartbreaking. The characters are complex and deep each with a very different story yet skilfully woven together to paint the larger picture of the world. Natsu who seems to rush headlong regardless in search for Igneel, Grey and his quest for redemption, Lucy searching for her place to belong and Erza and her mysterious past.
The animation is lovely the colours, expressions and background all add to the feel of this whole other magical world.
The sound and picture quality on these dvds is crisp and clear. I also like the option of Japanese dub with English subtitles. I think it just flows better in the language it was originally writen and performed with.
I'm a huge fan of this anime and it's certainly a must for any collection. If you're look for something fun and easy going maybe you're a fan of one piece and looking for something else to watch. Fairy Tail is one not to be missed.
続きを読む
1人のお客様がこれが役に立ったと考えています
役に立った
フィードバックを送信中...
フィードバックをお寄せいただきありがとうございます。
申し訳ありませんが、お客様の投票の記録に失敗しました。もう一度試してください。
違反を報告
レビュー を日本語に翻訳する

Anime Brighton
5つ星のうち4.0 Really good, shame nothing released past volume 4
2020年3月13日に英国でレビュー済み
Amazonで購入
Bought as a gift for my husband who loves most anime shows and he really liked this one. The story seems far better that volume one and he has already asked for volume three. The animation and voice acting is really good and the story arcs are not too long to watch that you loose interest. The only issue is the lack of volumes being released the UK. Only vol 1-4. So as an investment in a good anime show it seems not really worth the effort. If they released the whole season I would give it 5 stars but stopping so early just seems a waste of a good show
続きを読む
役に立った
フィードバックを送信中...
フィードバックをお寄せいただきありがとうございます。
申し訳ありませんが、お客様の投票の記録に失敗しました。もう一度試してください。
違反を報告
レビュー を日本語に翻訳する

Decided to get some Fairy Tail series boxes for the summer holidays. Its not Akira or Avatar, but the characters are endearingly 'over the top', theres plenty of action and laughs - and even a few serious moments. Very good, The cartoon style is interesting with vivid colours and the core characters generally having fairly bland 'big' faces, but some incidental characters have quite detailed faces.

The item arrived packed OK, on time and undamaged. The set consists of 4 DVDs is an oversized (probably double width) DVD box - four disk spindles, two on the inside of each cover and the four disks mounted in overlapping pairs. No extra content as far as I can see, just the episodes.

Be aware that Fairy Tale is a long running series spanning seven (maybe more?) seasons. The first four box sets (the ones that I bought) seem to be fairly priced and readily available. The subsequent ones seem to be expensive/rare Bluray or NTSC DVD only - hopefully they'll appear on UK DVD sooner rather than later, but the initial sets will keep us going for some time.
続きを読む
役に立った
フィードバックを送信中...
フィードバックをお寄せいただきありがとうございます。
申し訳ありませんが、お客様の投票の記録に失敗しました。もう一度試してください。
違反を報告
レビュー を日本語に翻訳する

Lucy Heartfilia is a 17-year-old celestial wizard who runs away from home to join Fairy Tail, a rambunctious wizards' guild whose members are famous for their overly destructive antics. Along the way, she meets Natsu Dragneel, a boy who is traveling the land of Fiore together with his partner Happy, a blue flying cat, in search of his foster parent, a dragon named Igneel who had disappeared seven years earlier. Lucy is soon abducted by a renegade wizard posing as the famous Salamander of Fairy Tail. Natsu rescues Lucy, revealing himself to be the real Salamander and a Dragon Slayer, a wizard with the abilities of a dragon. After defeating the imposter, Natsu invites Lucy to join Fairy Tail.

Stephen Gill
5つ星のうち5.0 fantastic
2014年10月12日に英国でレビュー済み
Amazonで購入
Got for my wife as shes into anime and has different dvds of things and she collects them got this for her as she hasnt seen or got this and i must say its a great pick love it
続きを読む
役に立った
フィードバックを送信中...
フィードバックをお寄せいただきありがとうございます。
申し訳ありませんが、お客様の投票の記録に失敗しました。もう一度試してください。
違反を報告
レビュー を日本語に翻訳する