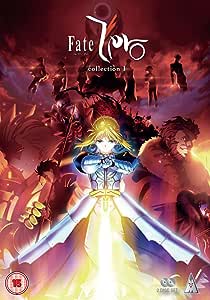 M.
5つ星のうち5.0 Fate/Zero
2016年2月20日に英国でレビュー済み
Amazonで購入
Before I start this review, I would suggest watching Fate/Stay Night (2004 release, I've also done a review about it) first, then watch Unlimited blade works, then this!! I got this a while back but didn't do a review, which I digress. Without further a do lets jump into this.
This first part of Fate/Zero has episodes one-thirteen. It does have English sub/dub, and it has some cool artwork inside the cover.
This is the events ten years before Fate/Stay night, its also the forth holy grail war. During the introduction you meet a man called Kiritsugu Emiya seeing his first born child, also a mage killer but hes selected to become a master in the holy grail war. The servants are classes and these are:
Saber
Archer
Lancer
Rider
Berserker
Assassin
Caster
Each master bears a mark, which are actually command spells meaning the Master & servant relationship doesn't always go smoothly. They can only use these three times so they have to be careful on how they use them. A guy called Kirei, has nothing to wish for meaning the war is meaningless however one of the servants changes his mind in this matter will it be for good or bad? Kiritsugu summons the Saber class (with his wife) which he gets shunned by since they wasn't expecting on whom it might be... As the time grows near all the masters summon their servants, some might ask them to spy on the others and learn what powers they possess before striking, or is it to create havoc across fuyuki city and lure them out that way? I wouldnt say the masters are truly good nor bad, except for two... As events conspire throughout the series you'll see an interesting climax in this first part of the series, you will feel sorry for certain few about their pasts and even the servants (mainly in part two & certain servants takes the spotlight) in episode thirteen you'll find out the servant, caster as summoned a unholy creature worthy to fight... Will Saber, Lancer and Rider succeed on defeating it?
This is truly a rare treat for anime fans it has a well driven story, the characters are well developed and the animation is the best you'll see!! I highly recommend watching this series, its well developed with a lot of diversity!
Thanks for reading!!!

Amazon Customer
5つ星のうち5.0 Fantastic series
2019年7月29日に英国でレビュー済み
Amazonで購入
This is one of the absolutly BEST anime series EVER. I read all the hype but thought it might actually live up to it and yes it really did. Great animation and a story that sneaks up on you growing all the time.
As close to a series for everyone as I come across in anime.
続きを読む
違反を報告
レビュー を日本語に翻訳する

Xbox Kiki
5つ星のうち5.0 One of the best things I've ever watched!
2014年5月18日に英国でレビュー済み
Amazonで購入
I pre-ordered Fate/Zero when I saw that it was only for 15 £ and didn't really know what to expect so I went for it - and all I can say is that I'm mind blown about how awesome this is!

The story is a pre-quel to Fate Stay Night(which btw is getting a remake this october by Ufotable). It takes place in our modern world with the twist that there excist magic in this world. It's about 7 masters who have a servant each whom is a heroic spirit such as King Author etc. They all fight in pairs for the Holy Grail(therefore Holy Grail war) which is and artifact that can grant any wish one may desire. The servants are devivded by 7 class where you have Saber, Berserker, Caster, Rider, Archer, Lancer, and Assassin. The really entertaining thing about this is that some of the pairs of masters and servants are bffs at first glance some of them have more tension between them and don't get along so well. The cast is quite huge and it's really hard to explain all the characters, but all the servants and their masters have different reasons to fight for the Holy Grail and the characters have destintive character designs and backstories - they are all and interesting bunch and that goes for both the masters and servants. Another thing that is really awesome is that no one is the 'main main' protogonist. The focus on the characters change acording to the episode you're watching. The effect from this is that you really don't know who's going to win and can get into everyone of the characters and feel for them. It's a great way of keeping the viewers attention.

The animation is done by Ufotable and is becoming my fav animation studio(along with studio BONES) - they sure know how to spend their money to make trully outstanding animation with bright colors, sharp and fluid animation, and the best mixture of 3D effect blended with 2D that I have ever seen. It's really is a joy to look at. And the quallity doesn't drop one bit!!! The soundtrack is equally awesome and epic as the rest of the show and was composed by Yuki Kajiura.

This anime contains A LOT of story, but it really is better to watch this without knowing that much. One downside to this is that the first episode is 40 minutes long and gives you a lot of information about the Holy Grail war which can get a bit confusing - and that's kind of a problem in the whole show. But either way, if you like, action, epicness, anime, or anything in between this is really a must watch - you won't be disappointed! It's my fav anime along with Rurouni Kenshin and it really just is EPIC! I can't wait for part two!

lemon
5つ星のうち5.0 Are you worthy?
2015年11月2日に英国でレビュー済み
Amazonで購入
Seven people sumon respective fighters and throw down, in a ruck for the wish-granting Holy Grail. Great characters and animation, set in modern day except magic is around. There are some funmy moments breaking up the seriousness (mostly featuring Alexander and his "master") but it isn't the kind of anime with fluffy talking cats - there's too much child murdering for that.This is a prequel for the series Fate Stay Night, which I have yet to watch and is older and apparently of less quality.
This is a good anime.
続きを読む
違反を報告
レビュー を日本語に翻訳する