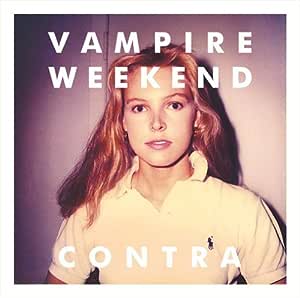 Japanese pressing includes two bonus tracks; Ottoman and Giant. 2010 sophomore album from the U.S. Indie Pop band. Like the first album, Contra was produced by keyboardist Rostam Batmanglij and is the realization of a whole and unique musical vision that sees the band stretching out and adding new textures, instrumentation, and rhythms into their sound. Primarily recorded in New York with a springtime sojourn to Mexico, Contra feels altogether fresh, joyous, and like nothing else but is immediately recognizable as the sound of Vampire Weekend. Features the first single 'Horchata'.

Mr. D Burin
5つ星のうち5.0 Simply superb
2011年6月21日に英国でレビュー済み
Amazonで購入
Blending poignant, self-aware lyrics with a wonderful backdrop of lush melodies, poppy beats and synth beats, Vampire Weekend's `Contra' is one of the most impressive and enjoyable records of recent years. Opening with the bright, bouncing beat and Beach Boys-esque backing vocals of `Horchata', a paeon to Spain's sweet drink, the album begins as it means to go on. It's an album split between the extrovert and the introvert, and the latter are combined in a dizzying wander through the exciting, imposing streets of New York, in `White Sky', where the experience "all comes at once", in a song permeated by the whoops and calls of the backing vocals. There's barely a mis-step on the album, and the following tracks `Holiday', a vibrant, day-glo evocation of the wait for a "summer's day", and the catchy, globalisation-focused `California English' lead the album well, into it's middle section. After these four tracks, the album seems to go a little more low-key, and somewhat more downbeat; with the beautiful tale of failed love that is `Taxi Cab', and the album's weakest track (though still worth a listen); the jerky escape-fantasy of `Run'. The album also experiments a little more towards the close; with the almost ping-pong beats of `Diplomat's Son', and the softer closer `I Think Ur A Contra', which fades to give Ezra Koenig a chance to showcase his vocals, which are almost as impressive as the music itself. `Contra' is indeed, one of the freshest and most listenable albums around; and has a bit of everything, from Carribean-sounding beats, to laments of love, and jerky-off beat, pop-punkish beats (seen best in `Cousins').

Whilst the album has come in for some criticism; some of it more valid than others, I feel that as a record I love strongly, it needs defending in some aspects. Firstly, the idea espoused by a number of older listeners that it's too much a rehash of Paul Simon's `Graceland' is a harsh criticism. As a big Paul Simon fan myself, I had concerns over these criticisms before purchasing `Contra', but the issue is one which has been largely exaggerated. There's no doubting Simon is a strong influence on the band's sound, but nowhere are the major themes of politics from `Graceland' rehashed here, the African beats of `Graceland' are largely notable by their absence in `Contra', and the two albums may have been compared lyrically; but there's no more than a passing similarity to love songs like `Diamonds on the Soles of Her Shoes', in the romance of `Diplomat's Son'. Secondly, the lyrics of `Contra' have come in for some criticism. Whilst Ezra Koenig is admittedly a little precocious at times, the lyrics are generally more erudite than those who criticise them as `pretentious' and such like, would have you believe. On the whole, I found this a hugely enjoyable and fresh-sounding listen, and one more expansive, and which held up to repeat plays better than Vampire Weekend's more limited, but still enjoyable first album.
続きを読む
4人のお客様がこれが役に立ったと考えています
役に立った
フィードバックを送信中...
フィードバックをお寄せいただきありがとうございます。
申し訳ありませんが、お客様の投票の記録に失敗しました。もう一度試してください。
違反を報告
レビュー を日本語に翻訳する

Alicia
5つ星のうち4.0 Classic Vampire Weekend
2013年8月24日に英国でレビュー済み
Amazonで購入
This album has the same great jolly feel from the debut. Although it took a few listens to get into it(hence the four stars) it is now level with their self-named album.
There is a song that makes me think of every part of the year!
Spring: 'Giving up the Gun' -Upbeat and and layered
Summer: 'Holiday' -self explanatory!
Autumn: 'Diplomats Son' -chilled, it has a nice reggae feel
Winter: 'Horchata' I know it's not hot chocolate but that's what this song makes me like, it is cosy and comforting.

All the songs have so many aspects to them that all fit together. This album is inkeeping with the style of their first album and yet has another somewhat more matured layer.
I also love the fact it comes with a card sleeve over the CD case, it make it feel more luxurious.
続きを読む
1人のお客様がこれが役に立ったと考えています
役に立った
フィードバックを送信中...
フィードバックをお寄せいただきありがとうございます。
申し訳ありませんが、お客様の投票の記録に失敗しました。もう一度試してください。
違反を報告
レビュー を日本語に翻訳する

Zach
5つ星のうち4.0 Good Album
2014年1月17日に英国でレビュー済み
Amazonで購入
Yeah, arrived pretty sharpish, good there.
Album is pretty good, very Vampire Weekend.. Which if you really like them that's great. But as someone who was just sort of trying them out, it's a bit.. different.
I don't want to take away from the fact that these are clearly talented musicians, I just don't think it's quite my music taste.
続きを読む
役に立った
フィードバックを送信中...
フィードバックをお寄せいただきありがとうございます。
申し訳ありませんが、お客様の投票の記録に失敗しました。もう一度試してください。
違反を報告
レビュー を日本語に翻訳する

Christian
5つ星のうち4.0 Better than the first
2013年12月7日に英国でレビュー済み
Amazonで購入
Cousins is a terrible song other than that a great album. Typical vampire weekend, interesting backing music, lyrics that make no sense whatsoever but it is a great album.
続きを読む
役に立った
フィードバックを送信中...
フィードバックをお寄せいただきありがとうございます。
申し訳ありませんが、お客様の投票の記録に失敗しました。もう一度試してください。
違反を報告
レビュー を日本語に翻訳する