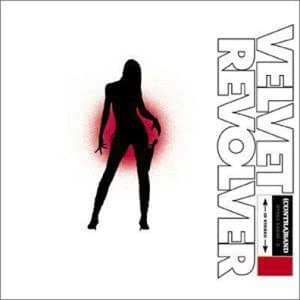 The Japanese Edition of the Debut from the First Superband of the Nils that Stars Former Guns N Roses Men Slash, Duff, Matt Paired with Former Stone Temple Pilot and Rock N Roll Bad Boy Scott Weiland plus Dave Kushner. Includes a Cover of the Sex Pistols' "Bodies" as a Bonus Track Not Found on the USA Equivalent.

The Japanese Edition of the Debut from the First Superband of the Nils that Stars Former Guns N Roses Men Slash, Duff, Matt Paired with Former Stone Temple Pilot and Rock N Roll Bad Boy Scott Weiland plus Dave Kushner. Includes a Cover of the Sex Pistols' "Bodies" as a Bonus Track Not Found on the USA Equivalent.

Foxtrot Oscar
5つ星のうち4.0 Contraband - Velvet Revolver
2012年3月4日に英国でレビュー済み
Amazonで購入
Took quite a while to get around to buying this album, having wanted to since hearing "Slither" on the radio. Have to say I'm glad I did. Most people probably already know this, but you get pretty much what you expect with this band. The guitar, bass and drum style of Guns 'n' Roses (the original and best) with the vocals of former Stone Temple Pilot frontman Scott Weiland.

The hard, melodic rock is still there, (as are the expletives), but Axl's wailing vocals are replaced with something a little easier on the ear. Plenty of good vocal harmonies too. The lengthy, classic Slash solos we're used to take a bit of a back seat, in favour of shorter, punkier licks and riffs. Overall, I feel they could have left 2 or 3 of the weaker tracks off the album to make the overall package stronger.

1. Sucker Train Blues:
A rip-roaring opener thats also catchy as hell. It'll get you nodding your head, tapping your foot and possibly playing air guitar too. 8/10.

2. Do It For The Kids:
A slight drop in pace but with a punchy and menacing main riff and a slightly sad-sounding chorus. Another great song. 7/10.

3. Big Machine:
Another hard-hitting mid-tempo rocker, great for playing loud in the car...or anywhere else for that matter. 8/10.

4. Illegal i Song:
A different feel this one. Quite angry, with elements of emo and grunge. Guitar work is slightly discordant - a bit Smashing Pumpkins or Jane's Addiction. If you like your songs a bit alternative, you'll like this. 7/10.

5. Spectacle:
A faster-paced number, but keeping the angry/emo feel from the previous track. Slash is let off the leash a little more here, adding a bit of flair to the generally hard punk sound. 7/10.

6. Fall To Pieces:
One of the two standout tracks on the album. A beautiful, gentle opening and quiet verses that gradually build to a huge bridge and chorus. Slash's guitar is back, sounding as good as it did with G'n'R. 10/10.

8. Superhuman:
Another catchy, mid-tempo number. Bit cliched with the drink, drugs and sex references. Not the best lyrics they've penned. Good without being particularly memorable. 6/10.

9. Set Me Free:
A frantic, fast-paced stormer of a track. The familiar quiet verse / loud chorus formula. It. Just. Rocks. 8/10.

10. You Got No Right:
A slower number, with a quiet, acoustic opening that builds to a slow rock ballad. Weiland's voice really shines here. More great guitar work from the top-hatted one. 9/10.

11. Slither:
The other standout track. You've probably seen the video on MTV or heard it on radio (or played it on Guitar Hero). Just brilliant. 10/10.

12. Dirty Little Thing:
Another very catchy song, but unusally the verses are quick, while the verses are slower, which gives it an odd, quirky feel. 8/10.

Franz Kiffka
5つ星のうち4.0 Spectacular return of the Gunsmen
2010年5月15日に英国でレビュー済み
Amazonで購入
I personally stayed away from this album until now probably because it was so hyped up and huge on release. There was such a huge thing about it, it seemed like people were accepting it without really listening to it just because of who is in this sort of supergroup.
Hearing much more of the album now I can finally say that I do think it really is very good, and the band is great and not just because they should be due to who is in it. I am a big fan of both Guns n Roses and Stone Temple Pilots but at first this did sound just like a quickly produced Guns imitation or cash in.
It is much more than that, and it is its own thing. Slash is the reason to hear the album. Sometimes he can be an overrated guitarist, but when he's fixed into the right kind of band, his guitar work can just be amazingly stunning as it is here for probably the first real time since the Guns Use Your Illusions albums of 1991/92.
Scott Weiland on vocals is very interesting, stunning and charismatic as ever and always here and it is simply a very great album from a band who have managed to survive so much and hopefully will continue to survive much more to make many more great albums like this one.
続きを読む
1人のお客様がこれが役に立ったと考えています
違反を報告
レビュー を日本語に翻訳する

Mr G
5つ星のうち5.0 What a record!
2018年12月3日に英国でレビュー済み
Amazonで購入
What a record. In my opinion, it more than stands up to any Guns N Roses album.
Bizarrely, Fall to Pieces is something of a misfit here though. Brilliant track, but goes against the flow of all those that precede it.
続きを読む
違反を報告
レビュー を日本語に翻訳する

Tomz
5つ星のうち4.0 Great Album
2013年8月6日に英国でレビュー済み
Amazonで購入
I bought this album after hearing liberated, there second album. listening through this album there are many great tracks, suckertrain blues, Big Machine, Fall to pieces and Slither (being the best song on this album with a mind-blowing slash solo).
Overall though some songs lack for me, leaving me with no choice but to knock a star off, however a great album and highly recommended.
続きを読む
違反を報告
レビュー を日本語に翻訳する
すべてのレビューを参照します
Amazonプライム会員ならお急ぎ便、日時指定便が使い放題
さらに、映画もTV番組も見放題。200万曲が聴き放題 。クラウドに好きなだけ写真も保存可能。
> プライムを無料で試す