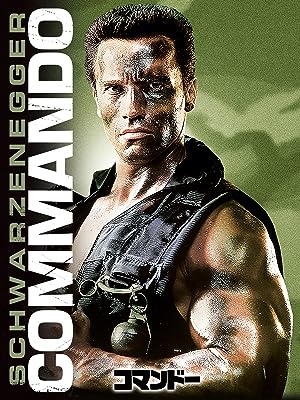 Adam
5つ星のうち5.0 Finally available uncut on DVD...
2019年2月3日に英国でレビュー済み
Amazonで購入
This review is specifically for the 2015 UK DVD release of Commando, from Fox. I'm not going to review the film itself, because if you're reading this you've probably already seen it (and if you haven't, I'll simply say that it's one of Arnie's best flicks, arguably his seminal action flick, setting the tone for his performance in later films such as Predator, The Running Man and Total Recall).

The focus of this review is on this specific release of the film, which is the first time the uncensored theatrical cut of the film has been made available on DVD in the UK. I previously bought the 2003 DVD release of Commando, also from Fox, and was disappointed to discover that substantial cuts had been made to the violence in the film. In total, around 59 seconds of footage was was removed; the 2003 DVD was release was actually more heavily cut than the VHS release, which only had about 15 seconds of footage removed.

The film was subsequently resubmitted to the BBFC in 2007 for the Blu-ray release and all previous cuts were waived. So the film has been available uncut on Blu-ray in the UK since 2008, but it wasn't until 2015 that the uncut theatrical cut was released on DVD as well. The 2015 DVD also has superior picture quality to the 2003 release, and includes a feature commentary from director, Mark Lester. I'm overall pleased with the 2015 DVD, and advise anyone looking to buy the film on DVD to steer well clear of the 2003 release.
続きを読む
9人のお客様がこれが役に立ったと考えています
違反を報告
レビュー を日本語に翻訳する

ben steward
5つ星のうち2.0 Schwarzenegger is good. Film isn't
2019年8月31日に英国でレビュー済み
Amazonで購入
Right. Where do I start. I'm a huge fan of Schwarzenegger. I enjoy most of his films. So I'll start with the good. Arnold Schwarzenegger is as good as you'd expect in an action roll. That's it. Now for the bad. The acting and dialogue is absolutely awful. The kids in Kindergarten Cop are far superior actors. The woman who helps Arnie is so annoying and Bennett is the worst antagonist ever put to film. I know it's a mid 80s film but the music is so cheesy. I mean really, really bad. This film has not aged well. Now for the really bad. It's edited really bad. Some of the kills are cut out. I can live with Arnie having the strength to carry a tree, or rip out a car seat with his bare hands, or survive a 100ft fall from a plane without a scratch, or throw a pipe with such force that it goes through a human body like a knife through butter. But when you cut out a realistic kill where he beaks a man's neck with his bare hands, one of the best kills in the film with the best one liner to follow. That's unforgivable
続きを読む
5人のお客様がこれが役に立ったと考えています
違反を報告
レビュー を日本語に翻訳する

SMOKEY
5つ星のうち5.0 FULL marks for a Full film
2015年1月10日に英国でレビュー済み
Amazonで購入
This is the first time I have written a public review EVER on Amazon, so I hope I do ok. To start with, VERY happy with the delivery time, and quality of the DVD. Always a Plus.

I remember buying this film on VHS years ago, and the scenes mentioned by other reviewers were in it. For example the neck breaking scene on the plane ETC. Well noticed those people. However that was a standard Theatrical version. Where as on the standard Region 2 DVD, these scenes have indeed been cut out. WHYYYYYYYY? Also the reviews for both the Region 2 AND the Director's Cut of this film are displayed on BOTH Region versions. Again WHYYYYYYYY? It gives people the idea that both versions have cut scenes. This is a Director's Cut DVD that I purchased (And am currently writing about) and has ALL the scenes plus more. For example an extended scene in the car when he is explaining to the lady about what's happened to his daughter Jenny, and how little time he spent with her when she was growing up. Also an extra moment near the end when he comes out of the shed and chops a soldier's arm off. If you want the full movie plus other scenes, make sure it is THE DIRECTOR'S CUT you buy, otherwise you are going to be a disappointed buyer. I hope this helps the Arnie Fans out there. Plus those fans of getting the full film you pay good money for. Five Stars for getting it ALL in the film.
続きを読む
28人のお客様がこれが役に立ったと考えています
違反を報告
レビュー を日本語に翻訳する

Jinx
5つ星のうち5.0 Best....Movie....Ever....
2015年6月1日に英国でレビュー済み
Amazonで購入
The best movie ever just got better! The Director's Cut 30th Anniversary Edition adds extra scenes of dialogue and each death scene is about 1.5 seconds longer, so you get a better look at the violence!

John Matrix is an ex-spec-ops soldier whose daughter is kidnapped by a deposed Central American dictator. He gives Matrix an ultimatum - return him to power or his daughter dies. Instead, Matrix goes on a one-man war against the terrorists!

The film is hilariously terrible and crosses over into the realm of extreme awesomeness! GO ARNIE!
続きを読む
16人のお客様がこれが役に立ったと考えています
違反を報告
レビュー を日本語に翻訳する

RAB
5つ星のうち3.0 Beware Edits
2017年11月7日に英国でレビュー済み
Amazonで購入
I saw Commando on TV recently and was sufficiently entertained by the endless succession of corny puns to decide it was worthy of a place in my DVD collection. However, the TV version, oddly enough, was more graphic and there are a couple of action scenes in this version which are abridged. I mention this not because I’m a gorehound but because the abridged scenes don’t really make any sense. Despite this being shown as an 18 certificate, I wonder whether this hasn’t been re-edited to a 15 certificate?
続きを読む
3人のお客様がこれが役に立ったと考えています
違反を報告
レビュー を日本語に翻訳する
すべてのレビューを参照します
トップへ戻る
Amazonについて
Amazonでビジネス
Amazonでのお支払い
ヘルプ＆ガイド
日本語ショッピングのための言語を選択します。 日本ショッピングのための国/地域を選択します。
© 1996-2020, Amazon.com, Inc. or its affiliates