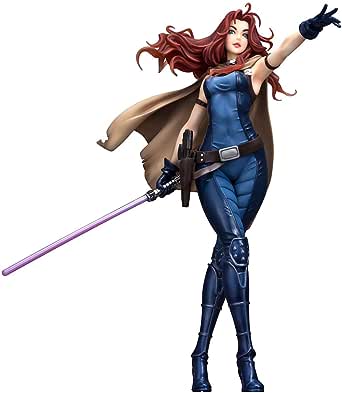 Per Frydendahl
5つ星のうち4.0 Mara Jade Bishoujo
2014年5月30日に英国でレビュー済み
Amazonで購入
Though I recieved my order 5 days later then assumed arrivel, I was quite surprised when I opened my package to see that the company I bought it from had placed a handheld fan in it. One of those with japanese flowers / waves on it. Very nice and kind, since I really like japanese culture.

Onward to the bishoujo itself: it looks great, only thing I noticed was a small scratch on the left side of her hip. Barely noticible.
As for the statuette itself, there's a couple of things that has caught my eye as for details. First of the gun on her side. In the comic 'Heir to the Empire' Mara has a small gun on the back side of her belt, not a big gun on the side, which again is a small bag on her belt. Second is the lightsabers; the purple lightsaber (hilt), which I am aware is associated as Mara Jade's, but it does not look like the hilt she has in "Heir to the Empire", but of that in "By the Emperor's Hand". The blue lightsaber, which was the one Luke gave to her at the end of "The Last Command", was Luke's first lightsaber and it looks like it's based of the A New Hope version and not the Empire Strikes Back -version, which was the one the Luke-clone used. This was looking through a more purist eyes, but overall it's a great looking bishoujo of Mara Jade. The hair and cloths on her looks awesome.
Last but not least, it looks great standing beside the Jaina Solo bishouju and I hope there'll be more bishoujos from the Star Wars EU or should I say the Star Wars Legend, since it's not considered canon anymore.
続きを読む
2人のお客様がこれが役に立ったと考えています
役に立った
フィードバックを送信中...
フィードバックをお寄せいただきありがとうございます。
申し訳ありませんが、お客様の投票の記録に失敗しました。もう一度試してください。
違反を報告
レビュー を日本語に翻訳する