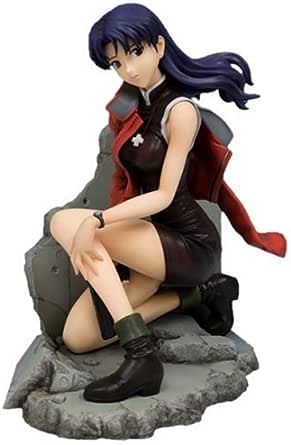 B.J.S.
5つ星のうち5.0 Lovely Misato is represented very faithfully
2010年9月12日にアメリカ合衆国でレビュー済み
Amazonで購入
I was a late fan to the original series of Neon Genesis Evangelion, but as I watched every episode late at night on Cartoon Network's Adult Swim, I quickly became infatuated with the deep, interesting characters and the eerie, poignant plot. Of those memorable characters, the tough, sexy, sophisticated agent Misato Katsuragi, who took Shinji into her home and under her wing, was definitely one of my faves. She's got that girl next door effervescent charm but is actually hiding a lot of deep mysterious emotions behind her facade. There's something uniquely telling about her quiet glances, and her sometimes seemingly forced smile and happy attitude.

To me this particular figure, standing roughly 7.5" tall (with base in that measurement), is a clear testament to that more mysterious side of Misato. Alone she looks fantastic, but placing her on the base really sets a sort of scene you would have seen in the show (that of a post apocalyptic crumbling cement wall, which she may or may not be hiding against during a heated fight). She comes with a decently modeled pistol that you can place in her open right hand, which dangles elegantly on her thigh. Her body language and expression makes her look apprehensive to use said shooting tool, though the slight tilt to her head makes her seem to at least be contemplating it. And the way the gun is hiding between her thighs has this sexy sneakiness about it.

Movement wise, the top half of Misato has a lot more action than the bottom, indicating a recent shift in gravity, or at the very least a present wind. Her legs are mostly firmly placed onto the ground, but she is kicking out the left one, as if maybe repositioning her balance. What keeps the piece moving however is her flowing purple hair and her signature red jacket having one sleeve swept free from her body completely, which, along with the short skirt of her tight dress, reveals just enough skin to make the contrast interesting.

The painting and detail is better than expected from the photos, but about right for the price. Misato is made of simple, clean lines and colors, so there wasn't really much room to screw up. There is little, if any, color bleed, and only a slightly noticeable seam on her thigh at very close inspection. Her jacket and her bangs hang separately from her body and face respectively, and the white cross pendant she wears around her neck is actually a free-hanging thin piece of string. The slight creases on her dress around her waist are handled well, and there's even a bit of realistic "fabric distortion" around the sleeveless opening of her dress, as well as down the arm with the sleeve on. Misato's slender hands are effeminately posed, and every nail is painted pink.

Misato's pretty face is uncannily represented, even sporting eyelid creases, but a little more expression with her mouth and eyes would have been welcome.

The base is mostly well detailed, especially where the bricks are supposedly broken, but the surface of said wall and floor could use a bit more texturing. It's maybe supposed to be some kind of metal plating, but there is literally no thickness to it, since it blends directly into the cement, so in that way it doesn't really make sense. (Misato and the base are separate from each other; Misato has no pegs or the sort to connect her to it, she is only placed on it).

Balance is where the figure loses some points. Misato tends to topple slightly to her right, especially when placing her on the base (and yes I checked that my surface was level). There's a sweet spot you have to find for her knee to rest on behind some rubble on the ground. Otherwise, it certainly wouldn't be too hard to surround her with a little more support. She definitely can rest perfectly upright like in the picture it just requires some patience to get it right. Also, the flowing hair and jacket sleeve do feel a bit tender, so be careful with those. Just make sure not to put too much pressure there.

What's there left to say? If you're a fan of Evangelion and it's quirky, lovable characters, there's no reason not to own this beautiful tribute to that show's most popular officer. While maybe not quite as detailed as other models within the price range, sometimes less is more, as Misato here should certainly prove to you. The only thing really missing is some instant noodles :P . A very clean, very faithful representation.
続きを読む
12人のお客様がこれが役に立ったと考えています
役に立った
フィードバックを送信中...
フィードバックをお寄せいただきありがとうございます。
申し訳ありませんが、お客様の投票の記録に失敗しました。もう一度試してください。
違反を報告
レビュー を日本語に翻訳する

Robin
5つ星のうち5.0 Fantastic quality for a decent price.
2019年12月25日にアメリカ合衆国でレビュー済み
Amazonで購入
Excellent condition. Although the figure came with two guns. I do not see where the other gun may go. Might be a production line mistake. The sculpt is gorgeous. The weight of it is hefty in a good way. There are no pegs for her to connect on the surface but the weight of the figure keeps her steady and in place. Amazing detail and amazing quality. Would buy another if I had to. It’s difficult to find this kind of figures in a reasonable price. It’s one of the few that hit this price that I do not regret. I sat on the price for a couple of days and still bought it.
続きを読む
役に立った
フィードバックを送信中...
フィードバックをお寄せいただきありがとうございます。
申し訳ありませんが、お客様の投票の記録に失敗しました。もう一度試してください。
違反を報告
レビュー を日本語に翻訳する