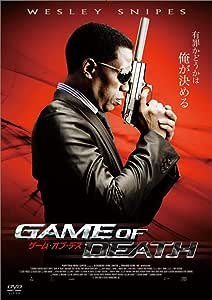 Tieuel Legacy
5つ星のうち3.0 You Know What You Will Get
2013年10月3日にアメリカ合衆国でレビュー済み
Amazonで購入
With most Snipes movies, you know you will get a solid mixed martial arts character with room to decide the back story for yourself. He's great at providing that.

I'm treating this as a direct to DVD or a film that got most acclaim from DVD sales. When Wesley is in this type of movie, I watch because he usually delivers. No need for an ensemble cast in most of these.

As for Game of Death specifically, my first watch didn't show me anything out of the ordinary. It's a movie that I watch while doing other things around the house (I do that plenty with my movies anyway). With the tone of the movie, you might find yourself picking up the pace while working around the house. Everything seems to be solid in this movie.

Michael
5つ星のうち3.0 "The world would be a better place without men like me"
2011年3月15日にアメリカ合衆国でレビュー済み
Amazonで購入
For a film that borrows its name from a Bruce Lee pseudo-classic, Wesley Snipes' "Game of Death" kinda disappoints. Despite easily being one of the best DTV flicks the former Hollywood headliner has appeared in, the movie foregoes a higher rating by sabotaging its own otherwise- high-end presentation with unnecessary post-production mucking and by choosing to present little more than the bare minimum by way of the martial arts dream matches its casting offers. A strong story and generally good acting performances ought to make this one a bit more promising for non- action-aficionados, but as far as this Snipes fan goes, I can't help but label it one big missed opportunity.

The story: undercover CIA agent Marcus (Snipes, Blade trilogy) is betrayed in-mission by his fellow agents Zander (Gary Daniels, The Expendables) and Floria (Zoe Bell, Angel of Death), who will attempt to use the connections of their employer/target (Robert Davi, Profiler) to finance their disillusioned flight from the Agency.

Most of the film, played out in flashback, takes place during one day and in only two locations: a hospital and a corporate stronghold. There is very little character exposition, but this works in the film's favor by making everybody nicely enigmatic; Snipes is like the lone loyal samurai pitting himself against turncoat defectors to his master. Production values are strong from the get-go, looking practically mainstream to begin with, but needing to contend with artsy imposed quick cuts and unnecessary black & white inserts at increasingly alarming rates; it's almost as though a producer saw the first cut of the movie and decided they had to justify it being released DTV by dating it with these clichéd low-budget add-ins. Not cool, Sony!

The action is mostly composed of corridor shootouts, but these aren't too bad. The rub lies in the four hand-to-hand excursions Snipes has...or rather, *who* he has them with and how poorly the filmmakers decided to utilize them. The movie offers four prospective dream opponents for Snipes in the aforementioned Daniels and Bell, along with supporting henchmen Ho-Sung Pak (The Legend of Drunken Master) and Simon Rhee (Best of the Best). Rhee and Bell, despite being exceptional martial artists themselves, only engage Snipes in shootouts; admittedly, Bell's is pretty good, but who wouldn't rather want to see a hand-to-hand showdown between the two? The same can be said for Pak, whose encounter with Snipes is insulting for how fast Wesley finishes off "the real Liu Kang". The finale, featuring Snipes and Daniels on a rooftop, could've been the standout battle of both their careers but consists entirely of an uninvolved-looking Wesley blocking Gary's high kicks before breaking his limbs in Steven Seagal fashion. His two worthwhile fights are against no-name henchmen, but these are either disappointingly one-sided or way too short.

"Game of Death" is a strong enough thriller that it manages a passing grade despite these shortcomings; the best possible experience you can have with it is by watching it on its own terms and not setting yourself up for disappointment as I apparently did. A movie like this proves that Wesley Snipes' ousting from Hollywood was completely unsubstantiated and that he still has what it takes to be a mainstream star, and that Gary Daniels and Zoe Bell have long been ready for big-budget exposure. Director Giorgio Serafini (Giallo) could potentially make a name for himself in movies like this, but only if he learns to ditch these stupid cinematic snafus. This one's for consumption by the general bored-on-a-Friday-night crowd, people - a shame, since it could've been so much more.
続きを読む
7人のお客様がこれが役に立ったと考えています
役に立った
フィードバックを送信中...
フィードバックをお寄せいただきありがとうございます。
申し訳ありませんが、お客様の投票の記録に失敗しました。もう一度試してください。
違反を報告
レビュー を日本語に翻訳する

Almarine The Redeemed
5つ星のうち5.0 I LOVE WESLEY SNIPES IN "GAME OF DEATH!"
2011年9月7日にアメリカ合衆国でレビュー済み
Amazonで購入
WESLEY SNIPES IS SUPERB AS ALWAYS! LOVE THE INS AND OUTS OF THE ACTION AND MYSTERY. I DID NOT WANT TO MOVE WHEN I PLAY THIS MOVIE. I DON'T WANT TO BE DISTURBED. I HAVE MY SNACKS READY TO GO AND MY EYES ARE GLUED. EXCELLANT MOVIE!