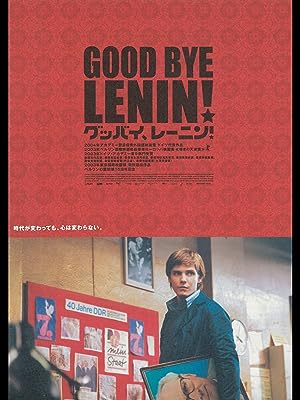 Carson
5つ星のうち5.0 Protecting mother from news that DDR had collapsed
2020年1月14日に英国でレビュー済み
Amazonで購入
An entertaining film set at the time of East and West Germany reuniting.A son goes to great lengths to protect his dying mother from the shock she might suffer if she knew that the DDR where she lived had collapsed.
続きを読む
3人のお客様がこれが役に立ったと考えています
違反を報告
レビュー を日本語に翻訳する

Katja
5つ星のうち5.0 love it - funny movie
2019年11月3日に英国でレビュー済み
Amazonで購入
I always watch this movie with my friends from abroad. History well explained though funny at the same time. We love you DANIEL BRUEHL, you are an awesome actor. the krauts from LONDON xoxo
続きを読む
2人のお客様がこれが役に立ったと考えています
違反を報告
レビュー を日本語に翻訳する

Christopher M Cotton
5つ星のうち5.0 What Would Lenin Have Thought..A Comedy About the Demise of Communism?
2011年8月2日に英国でレビュー済み
Amazonで購入
I came across the super comedy a number of years ago when I was staying in Germany. I have a number of friends from Rostock Eastern Germany and as a lecturer in International Relations in the USA, have talked endlessly about life in the former Warsaw Pact countries with Czech, Polish and German friends. This film looks at the collapse of the GDR from one family's perspective in a way that mirrors what I was told happened by my friends.

The plot is simple but intriguing. It begins in the closing days of the GDR. The narrative is given by Alexander (Daniel Bruhl), who is an unhappy young man living in a claustrophobic system, which he feels is oppressing him. He lives with his mother, a devout communist since her husband fled to the West and sister in a small communist flat in East Berlin. Alexander is involved in a demonstration and gets arrested in front of his mother. The shock of his arrest brings on a heart attack which leaves her in a comma for a number of months. Whilst the mother is in the comma the GDR collapses, the wall comes down, western goods and eventually money flood into the East, the sister finds a West German boyfriend, the family flat gets a western make over and many peoples lives change. When the mother awakens, the doctors are afraid a shock may kill her, so being a devout communist and fearing finding out there is no GDR any more, Alexander decides to keep what has happened secret from his mother, with hysterical consequences.

Whilst the film is humorous it is also quite a sad and reflective film. It shows that not everything changed for the best and all things western had their personal and societal costs. The tension between East and West Germans, which I felt when I lived in Wurzburg in 1990 and Luneburg in 1992, comes across brilliantly. The characterisations used in the film are all sublime. The cost to East German society is left wide open so all can see in terms of, unemployment, alcoholism and the consequences for the family of an escapee to the West. I actually use this film in my USA International Relations classes, to show students that not everything was bad behind the Iron Curtain and that there was a severe societal cost to the wall coming down and the westernisation process.

I think this film is sublime representation on life in an Eastern Bloc country and how the country changed due to westernisation. It is a comedy but it also shows the negative side to all the changes that happened in 1989 and 1990. I think this is the best German comedy I have seen in many years. My version had great English subtitles.

Cornishpasty
5つ星のうち5.0 Beautiful, moving film
2013年4月29日に英国でレビュー済み
Amazonで購入
This is possibly my favourite film. The comments on the case suggest that it is a hilarious comedy, and it does have many very funny moments, but to call it a comedy doesn't prepare you for just how incredibly moving it is. The story is itself a very clever idea, and perfect material for a great farce, but the substance of the film is the love and devotion of a teenage son for his ailing mother, and the lengths he will go to to keep her alive in her delicate state. The funniest moments are the fake East German newsreels he has to produce with his new work partner, an amateur filmmaker, to try and explain the strange changes his mother notices outside, as she slowly recovers, and Alex finds himself creating for her an East Germany with a more human face. The film is beautifully made, the scene with Lenin's statue is simply wonderful. The music is lovely. A beautiful, moving film.
続きを読む
7人のお客様がこれが役に立ったと考えています
違反を報告
レビュー を日本語に翻訳する

Nicholas Casley
5つ星のうち4.0 More Classic Family Drama than Comedy
2012年1月9日に英国でレビュー済み
Amazonで購入
I saw this film when it was initially released back in 2003 and have only now (2011), following my first visit to Berlin, got around to purchasing the DVD. Unfortunately, this means that the only version I can find to buy is the one without all the extras that accompanied the initial release.

Many have commented on the comedic elements of this film. For sure there are some good funny moments, but I felt the film only came into its own halfway through, once the premise of the mother being nursed after waking from her coma had been set. But the more I watched the movie, the more I came to the conclusion that it's not really a comedy at all; rather, it's a family drama played out in historic times. I came also to understand more how so many Germans loved it for it showed how the unification underlined that not all the West was good and not all the East was bad.

There are some problems with the plot. For example, would the unwanted and unfashionable furniture placed on the street really still be there eight months later? But, as with the novels of Dickens or Trollope, such inconvenient necessities are subject to the greater importance of the developing drama.