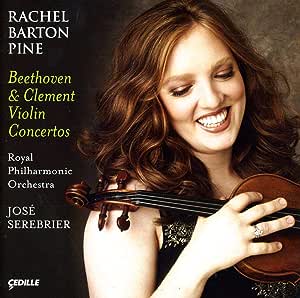 "Recordings don't get any better than this ... Astounding!" -- ClassicsToday [CED 68]

World premiere recording of a major classical work: the 1805 violin concerto by Franz Clement, the violinist for whom Beethoven wrote his Violin Concerto in 1806. First recording to put the Beethoven Violin Concerto into historical context features major artists putting their interpretive stamp on these important works.

"Recordings don't get any better than this ... Astounding!" -- ClassicsToday [CED 68]

World premiere recording of a major classical work: the 1805 violin concerto by Franz Clement, the violinist for whom Beethoven wrote his Violin Concerto in 1806. First recording to put the Beethoven Violin Concerto into historical context features major artists putting their interpretive stamp on these important works.

J. A. Peacock
5つ星のうち4.0 Two violin concertos that make an interesting and enterprising pairing
2009年6月6日に英国でレビュー済み
Amazonで購入
This is an enterprising coupling on the part of Cedille Records but also an apt one, since Beethoven wrote his own concerto with the violinist Clement in mind.

Clement's work is on a large scale, like that of his colleague, but his movements progress at a more leisurely pace than Beethoven's do. Although his concerto is symphonic in structure and weight, it doesn't attempt the closely woven argument in Beethoven's large scale works; and while some of the writing is clearly influenced by Beethoven's first three piano concertos, it doesn't share the distinctive forward drive of those compositions.

Clement's voice is assuredly a Classical one - and a conventional one, though I don't intend that in any pejorative sense. The opening movement is finely balanced and primarily lyrical. He can command a fine melodic line and the sweetness of his writing at times reminded me of Viotti in his earlier concertos. The `adagio' is serene and the concluding movement has a delightful principal subject. His orchestration is sensitive and he makes effective use of the brass and woodwind.

The cadenzas in this recording are Rachel Barton Pine's own (for both works). They are sympathetically written and effectively delivered. She has a pleasing legato tone, which reaps dividends in the lyrical lines of Clement's concerto especially.

Although the music isn't as striking or as wide-ranging in mood and orchestral colouring as in Viotti's late violin concertos, this work still stands head and shoulders above the other display pieces being churned out by violin virtuosi across Europe at the time. All in all it is a lovely, finely constructed piece and prompts you to wonder how Clement's name could have remained in obscurity for so long. Hopefully this disc will foster further investigation of his output.

The Beethoven concerto is given a solid performance, somewhat leisurely perhaps and though Rachel Barton Pine is a fine musician, there is nothing here to challenge the best recordings in the catalogue. I have heard the finale, in particular, played more robustly than it is here and it is, I think, a movement of robust humour. This doesn't really matter - I imagine for most people the Clement concerto will be the main reason for buying this set and the two discs are available for the price of one.

Recommended for anyone interested in the music of this period or in the violin concerto generally.

Ian Christians
5つ星のうち5.0 A glorious discovery
2016年4月19日に英国でレビュー済み
Amazonで購入
I became aware of this concerto after I had asked a very knowledgable friend to give me a list of exceptional unknown works. I run music festivals and am always on the lookout for "new" repertoire. The Clement concerto was the find of the year for me (2013). It is a glorious work, arguably the best violin concerto written up to that time, and the biggest. The link with the later Beethoven concerto (the greatest ever written to most music-lovers) is sensational, as some of the figuration is the same, and a theme or two related. Here is an unknown concerto by one of the leading violin virtuosi of the day, who commissioned, premiered, and was the original dedicatee of Beethoven's masterpiece, in the same key, almost of the same length, and written at least a year (and possibly several) earlier. Undoubtedly Clement would have advised Beethoven on the latter's composition.
A glorious piece of music which ought to be in the concert repertoire. It will be performed in a chamber version at my festival next June 2017, along with some other contemporary little heard masterpieces.
続きを読む
違反を報告
レビュー を日本語に翻訳する

Mike W
5つ星のうち4.0 A Biased Review?
2009年12月15日に英国でレビュー済み
Amazonで購入
Perhaps I am biased as I attended the recording session of the Clement Concerto on a damp November evening in London. The fact that this is the premiere is most suprising. How a work like this can get forgotten for 200 years is puzzling. Whilst it a fine concerto, it does not quite match Beethoven's masterwork. Rachel's performance of this concerto is definitive. The Beethoven concerto is also a fine recording and Rachel's cadenzas fitted so well. Some tempi a little on the slow side for my taste and I would have liked a bit more sparkle in the 3rd movement. Nevertheless, this is an essential item for all collectors of music of this period.
続きを読む
2人のお客様がこれが役に立ったと考えています
違反を報告
レビュー を日本語に翻訳する