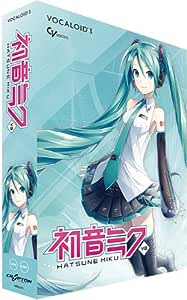 iLuv2work
5つ星のうち5.0 This is the Japanese version. Search "Mikuenglish" on the Internet for the English package.
2013年11月16日にアメリカ合衆国でレビュー済み
Amazonで購入
Just to be clear, this is the actual Japanese release. The printed manuals, startup sheet, licensing card are all printed in Japanese. There is a disk for PC and another for Mac for the Vocaloid software and a third disk containing Piapro's Studio One. During the installation there will be a prompt asking you to choose between Japanese and English for the setup (it asks you in Japanese btw, and your choice will be in Kanji characters.) You will need to know what "English" looks like in kanji (英語）. Once that is done, the whole setup will be in English and the software will default to all English menus and such. My limited Japanese ability got me through this ok, your results may vary.

Only the Japanese voice banks are included. Miku's voice in sweat, dark, soft, solid, and original.

As for the software's usability. It is very simple to get started and enter lines of songs lyrics and have Miku singing to you for the first time. However, there are many subtleties in the way you adjust her pitch, tone, breath, etc....to make her sound natural. I think that's the hard part. This part is not explained very much in the included pdf user manual.

Yes, there is an English user manual as a pdf file. However, the manual lacks depth. There is very little help in showing how the various adjustments to Miku's singing work. The manual is sort of written like, "there's the brake on the left and the gas pedal next to it." No discussion on how how they work.

One other thing I'm confused about it this "tiny editor" thing.

The full Vocaloid3 Editor has a full array of editing and other features. Apparently, after my installation, all I have to work with is this thing they call the Vocaloid3 tiny editor. The editing features are limited. This tiny editor is not going to get you production capabilities. I think this bundle assumes that you already have the full editor. For playing around, it works fine.

I'm sorry that I can't get into more of how the actual software works since I'm am an absolute bare bones beginner. I don't have aspirations of being a music producer. I only bought this on a whim, and so far I'm having fun having Miku sing various songs from AKB48.

ファンギャル
5つ星のうち5.0 Great
2014年8月18日にアメリカ合衆国でレビュー済み
Amazonで購入
I DID write a detailed review before but it got lost somehow. I will just say, in short, that the product is great and as described. It is the Japanese version with all the materials in Japanese, and does not include the Hatsune Miku English.
続きを読む
5人のお客様がこれが役に立ったと考えています
違反を報告
レビュー を日本語に翻訳する