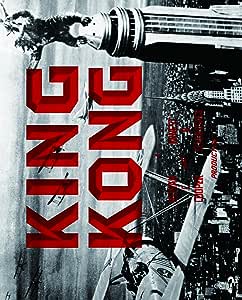 R. A. Bradshaw
5つ星のうち5.0 The original and best by a long way
2017年2月12日に英国でレビュー済み
Amazonで購入
What can you say about the greatest fantasy film ever now even better on blueray love this film and looked forward to the Peter Jackson remake what a waste could have and should have been so much better I will stick with the original no contest.Do yourself a favour buy the original and if possible watch it on largest screen you can
続きを読む
5人のお客様がこれが役に立ったと考えています
違反を報告
レビュー を日本語に翻訳する

Steve H
5つ星のうち5.0 Many Presidents but only two Kings
2012年7月25日に英国でレビュー済み
Amazonで購入
At last a superb classic film has been given the Hi-Def treatment it deserves. This blu-ray of the original Great Ape movie delivers terrific picture quality alongside much improved sound plus 5 hours of incredibly worthwhile extras. This all comes in a book format package which includes some history, stills and poster repros. etc. If you already own the Warner U.S. DVD then this blu-ray's content is identical and you should carefully consider if the upgrade is essential - for me it certainly is even though the quality of the DVD version is very good. I waited until this blu-ray (which is region free. so plays on all machines) hit a low-ish price on Amazon Marketplace and then snapped it up. The Warner versions of King Kong are far superior to the U.K. releases (so far) and it's shameful that (again, so far) there is no hint of an English blu-ray release. I should mention that among the extras is a Peter Jackson re-creation of the lost 'Spider Pit' sequence, created using the animation techniques used in the original. If you are a Kongophile then don't hesitate, add to basket, there ain't gonna be a better version of this movie for a long, long time.
P.S. The other King is that lad from Memphis of course.
続きを読む
6人のお客様がこれが役に立ったと考えています
違反を報告
レビュー を日本語に翻訳する

Victor
5つ星のうち5.0 King Kong, 1933, 1993 Golden Classics release - The King of monster movies!
2010年8月31日に英国でレビュー済み
Amazonで購入
This is the original, and by far the best, version of the tale of King Kong. Released in 1933 it is a both a stunning technical achievement and a thrilling film.

Film maker Denham hires a ship to take him to a mysterious island, where he hopes to film wonders previously unseen by man. There they find the mighty Kong and a whole island full of giant prehistoric creatures. Denham's lead actress, Anne Darrow (Faye Wray with her famous scream) is kidnapped by islanders and offered as sacrifice to Kong, who promptly falls in love with her. What follows is a thrilling adventure as Kong takes her to his home in the jungle, fending off several dinosaurs in the process. The ship's crew follow them, with spectacular adventures of their own. Finally Kong is subdued and taken to New York, leading to the final iconic climax on the Empire States Building.

As well as the thrilling adventure, this film is a supreme technical achievement from special effects master Willis O'Brien. Kong is superbly realised, and the fights between him and the dinosaurs are just breathtaking. I'm a bit old fashioned and think that animations like this have a lot more depth and life to them than CGIs. Compare this film with the recent Peter Jackson remake and you will see what I mean.

This isa great edition of the film, with previously lost scenes edited back in. The print has a few scratches and spots on it, but is in general OK. There is an interesting documentary looking at the making of the film.

DAVID BLAIR
5つ星のうち5.0 Probably The Best Movie Ever Made.
2013年11月14日に英国でレビュー済み
Amazonで購入
I remember the first time I saw this. Was a Friday Night on BBC 2 1976 and I was blown away and left with a love of Monkey Movies. If it's got an Ape in it I'll watch it. But None Ever match this! De Laurentis and Jackson might have well saved their time and millions of dollars because their versions just don't cut it. And keep your CGI it's more awe inspiring to see what Willis O'Brien did with some rabbit fur and stop motion.