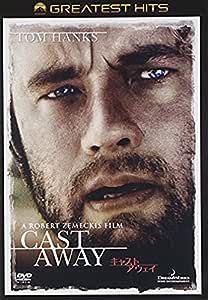 Rick Brindle
5つ星のうち5.0 A good film
2020年3月27日に英国でレビュー済み
Amazonで購入
THis is the film where Tom Hanks lost shedloads of weight just for the role. When you've got that kind of commitment, the film really needs to be watched. Hanks plays a FedEx workeer whose delivery plane crashes into the sea and he's marooned on a desert island. He learns to survive and finally makes it back to civilisation. That's pretty much the whole story, minus the human interests that make this very watchable. Hanks as always, is brilliant, and there's the usual weepie stuff along the way. A good film to watch.

Ian Stretch
5つ星のうち5.0 How long would I last?
2018年11月5日に英国でレビュー済み
Amazonで購入
The Loneliness of the Character Chuck on a Deserted Island in the Middle of the Pacific.
I think I would be talking to a Volley Ball too.
Even with the Basic Training I have had would not have seen me through. Then again the Thought Helen Hunt would keep me going.
Tom Hanks deserved an Oscar for his Performance.
The Ocean Ditching of the Plane is Intense.

Spike Owen
5つ星のうち4.0 We live and we die by time. And we must not commit the sin of losing our track on time.
2011年6月20日に英国でレビュー済み
Amazonで購入
*** This review may contain spoilers ***

Jetting off on yet another important task, FedEx whizzer Chuck Noland leaves his girlfriend Kelly Frears (Helen Hunt) behind just before Christmas. Disaster strikes during the flight and the plane crashes into the ocean. Managing to free himself from the sinking jet, Noland is washed up on an uninhabited island. Without basic modern comforts and fighting solitude daily, Noland must live in hope that one day he might be saved before he loses his mind or the will to live.

Tom Hanks (Noland) re-teams with director Robert Zemeckis after their hugely successful collaboration on 1994 awards stealer, Forrest Gump. Though Cast Away didn't win any awards (the usual cry of it being Oscar bait had preceded it) it can be argued to be Hanks' best performance. Few actors in the modern era could carry the film the way that Hanks does. Beguiling and drawing us into his loneliness, Hanks, with minimal dialogue (his only company being a volleyball that washed up with a few other FedEx parcels) excels with facial and bodily acting. Zemeckis, who should be applauded for the middle section and the terrifying plane crash that precedes it, puts Hanks' Noland through the mangler. The convenience of said parcels washing ashore aside, Noland is bumped bruised and dentally challenged, the Robinson Crusoe clichés exist of course, but Zemeckis and a heartfelt Hanks put us there on the island as well, with a pat on the back due for the excellent work by the sound department I might add.

Sadly Cast Away is bookended by not so great work. The opening character introductions are unremarkable but just about good enough for the plot set up, but the ending lacks emotional punch and defies what has been built up. Things aren't helped by Helen Hunt's lack of chemistry with Hanks, but that in turn is not helped by the writing from William Broyles Jr. since it's only really now that it's Noland that we care about. It's a bit churlish to complain too much though, because Zemeckis kept us on the island with Chuck, there was no cutting back to grieving family or fruitless rescue attempts. With that it was a truly fine one man show, even if that is something that ultimately renders the ending something of a let down. 7.5/10
続きを読む
1人のお客様がこれが役に立ったと考えています
違反を報告
レビュー を日本語に翻訳する

The Admiral
5つ星のうち4.0 2 Reviews. 1) The film 2) This version
2013年4月29日に英国でレビュー済み
Amazonで購入
This one of my favourite Tom Hanks films and when I saw it on Blu Ray for £8,I thought it was worth adding to the collection.

The film remains worthy of 4 stars, is well constructed and thought provoking. The CGI work on the whale scene still leaves a little to be desired, and I still find Chuck's metamorphosis when saved a little strange. One moment he's jibbereing, half crazed and talking to his volleyball pal Wilson, but within 4 weeks of recue, he's on the plane home in his best Gap chinos, completely straight again. For me, one of the most interesting parts of the story would have been the immediate reintroduction of Chuck to civilisation - a shower, having his hair and beard cleaned up, and his teeth fixed - all would have been very testing for a once suicidal man, who had given up all hope, to deal with surely, and seeing how he dealt with that, and his impatience (balanced with trepidation) at seeing Kelly again, would have been fascinating. Also, would he not have been on the phone to the love of his life straight away, rather than waiting 4 weeks, when he meets her in the flesh, to find out she married somebody else? The final part of the plot I struggled with was around Kelly's new life : fiancé dissapears 4 years prior, he's the love of your life but (judging by the age of her child) it didn't take her very long to move on - perhaps 2 years, based on the age of her daughter!

That said, despite the plot issues, it's well done and the plane crash it truly terrifying on a big screen in Blu Ray!

Regarding the disc : THIS IS ONLY 1 DISC! The 2 disc version described in the Amazon blurb is not what you get, so there are no directors commentaries, or interviews, which frankly sound like some of the best reasons for buying this. Also, the are parts early in the film where the transfer is quite poor, with white spot flickering - a bit like an old print of a celluloid film, which again is not great when one considers this is a major studio issue.
続きを読む
違反を報告
レビュー を日本語に翻訳する

Gary
5つ星のうち5.0 Great film. Purchased as not seen it for a while. Slight spoiler in my review.
2013年10月20日に英国でレビュー済み
Amazonで購入
Although if it did actually happen to me, I would probably hate it, I do watch this and often wish I was there. Away from all the hustle and bustle and pressures of everyday life. Enjoying the solitude and being at one with nature. But what I really do like about this film is that unlike many other movies, it does not just end. So he gets rescued, but the credits don't just roll up, and that's it all over. No, you get to see how he integrates back into life, and what happened to the life he left behind. Post-rescue, the film really does continue for quite a while longer. I guess in some ways it's a little like "Lost" but minus the rather disappointing, confusing, and thrown together ending. It's certainly a film I will bring out and watch every few years.
続きを読む
1人のお客様がこれが役に立ったと考えています
違反を報告
レビュー を日本語に翻訳する
すべてのレビューを参照します
Amazonプライム会員ならお急ぎ便、日時指定便が使い放題
さらに、映画もTV番組も見放題。200万曲が聴き放題 。クラウドに好きなだけ写真も保存可能。
> プライムを無料で試す