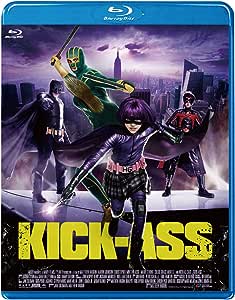 Mr. M. Herbert
5つ星のうち5.0 Wow!
2014年2月19日に英国でレビュー済み
Amazonで購入
Incredible film. Not at all what I was expecting. This film is well shot, with quick scene changing, strong colour contrast, quirky characters and takes a simple theme of a slightly nerdy teenager seeking glory by dressing up in a rubber Scuba suit and trying to right justice on his own, becoming a "super heroe". Then insert an 11 year old girl, whose prolific use of language leaves nothing to the imagination. Add to that she gets used as a live target by her deranged dad, who shoots her, then trains her as a killer, first class. The fast, graphic action runs throughout the film. Throw in good humour, adolescent feelings which we have all experienced at some time or another, then top it off with a dead body count that would embarrass John Wayne and you have a good idea that this film is not only very different, but also an excellent, fun and action packed film. The 11year old girl, ( Chloe Grace Moretz) completely and utterly steals the entire show. Her profanity is only overtaken by her incredible screen presence and acting skill, her ability to kill at least 43 baddies and deliver some of the best one liners I have ever heard on the big screen! (If you don't believe me, wait for her first appearance as Hit Girl and you will see what I mean). This really is an outstanding film in so many ways, with a good, strong cast of baddies, great Marvel writing and storylines and above all, unusual and very entertaining. Highly recommended.
続きを読む
6人のお客様がこれが役に立ったと考えています
違反を報告
レビュー を日本語に翻訳する

Mrs. Hatter
5つ星のうち5.0 Watch it!
2018年12月31日に英国でレビュー済み
Amazonで購入
Kick Ass packs a serious punch and is a film that surprised and delighted me, had me in stitches and kept me well and truly engaged from start to finish. It wasn't what I was expecting at all and is an awesome little film that everyone should see at least one. You don't need to be a fan of superhero films to enjoy this film at all, just watch it!
続きを読む
2人のお客様がこれが役に立ったと考えています
違反を報告
レビュー を日本語に翻訳する

Paul Tapner
5つ星のうち5.0 Kick ass kicks ass and gets his ass kicked
2010年10月2日に英国でレビュー済み
Amazonで購入
A movie adaptation of a successful comic that asks the question: why has nobody ever tried to be a costumed crimefighter?

Or so typical teenager Dave Lizewski asks. Desperately average and living a desperately ordinary life, ignored by the girl he likes, and a fan of comics, he sets out to make a difference. Via two big sticks for weapons and a wet suit brought off ebay as a costume.

Quickly finding that criminals are bigger and tougher and carry nastier weapons than him, things don't go according to plan. But when he achieves success in his new role anyhow, new problems await. Such as the man who leads the mobs in his home city. And the fact that there are two other heroes out there already. Big Daddy and his eleven year old daughter hit girl. They're taking down the mob. And kick ass is caught up in the middle of things....

This movie features lots of violence. But whilst it's graphic it's realistic rather than gratiutous. And lots of strong language. Some coming from said eleven year old girl. And a few sexual references also. It is not for the easily offended. And if you are then go out into the real world where you will find lots of that sort of thing and try and do something about it. Like Kick Ass does.

Because this is a rousing story of someone trying to make a difference. Of villains and heroes. And it's impossible not to find yourself rooting for the latter. If you want a good guilty pleasure of a film, then this is it. In the right mind you will enjoy yourself as much as Nicholas Cage clearly does in the role of big daddy, where he channels his inner Adam West.

One other thing to be warned about is a fight sequence that takes place in the middle of a lot of strobe lighting. Epileptics and those who can't look at that without hurting their eyes be warned.

The film also has one of the best scores I've heard in a while, each bit of music really doing it's job in enhancing the scene.

Mind you if you've read the comic you will find that whilst this is almost an entirely faithful adapation a couple of plot points have been changed or left out and some things toned down. They do make it slightly more hollywood. But even so it's a great adaptation and you can manage without those missing things.

The dvd is a single disc edition.

The only subtitles and languages are in english.

The only extras are a commentary from the director and a twenty one minute long look at the making of the comic. The writer and the artist being excellent interviewees but this may be more of interest for fans of that particular medium that those who aren't.

Even so, the movie on it's own makes the dvd worth a five star rating.
続きを読む
2人のお客様がこれが役に立ったと考えています
違反を報告
レビュー を日本語に翻訳する

D. Keatis
5つ星のうち5.0 Good call Babydoll!
2010年9月10日に英国でレビュー済み
Amazonで購入
Kick ass is arguably one of the best films of 2010; fun, irreverent, surprisingly touching in places, spectacularly violent and infinitely quotable with more pop culture references than a Spaced box set.
What could have been a throwaway superhero parody is given surprising weight by its central performances.
Rising Brit star Aaron Johnson (fresh from playing a young Lennon in Nowhere Boy) is charmingly earnest, naive and nerdy as Dave Lizewski / Kick Ass. Mark Strong is his usual delightfully villainous self, Christopher Mintz-Plasse brings his trademark comic eptitude but the stars of the show have to be Nicholas Cage and Chloe Moretz as Big Daddy and Hit Girl respectively. Cage's performance veers wildly from fond awkwardness to brutal badassery with an everpresent underscore of emotional sincerity and is easily one of the best things about the film (and really, how long has it been since you can say Nic Cage is one of the best things in a film). It's the pint sized juggernaut of screen presence that is Miss Moretz's Hit Girl that really steals the show, though. A guttermouthed pre-teen vigilante with a heart of gold who wields a vast range of weapons with terrifying dexterity.

The film is given a decent treatment by Universal here.

Picture quality is superb, with the over saturated colours (remeniscent of the Spider-Man trilogy or Joel Schumacher's Batman films) looking really vibrant and creating a nice comic book effect. Detail is great too with the textures of costumes being particularly impressive. Grain is minimal, in fact more or less absent, though devotees of rich dark blacks will be disappointed by the deliberately clolour tinted blacks most of which tend to appear either charcoal or slightly bluish.

The films 5.1 DTS HD track really is excellent with lovely clear dialogue and ambient sounds beign consistently where they should be and at the right volume. Directionality and clarity are particular strong points in the action scenes. When Hit Girl dispatches a roomful of street toughs to the Bannana Splits the punky rhythms of the song resonate well with the hacking and slicing effects. In gunfight scenes there is a lovely distinction and sense of direction to explosions, whizzing bullets and spent shell casings tinkling on the floor.

Extras are sparse in quantity but really make up for it in terms of quality. The two hour making of documentary is the most comprehensive I've seen in a Superhero film since that of Superman Returns. It also features a seperate documentary that chronicles the inception of Mark Millar's comic which funny book buffs like myself will enjoy. There's also a really nice concept art gallery and an interesting, if slightly dry, commentary from director Matthew Vaughn.

Does this release merit the extra cost over the standalone Blu Ray or DVD editions?

Well for my money the artwork justifies the extra expense on its own, particularly the lovely inside cover art which features Kick Ass, Big Daddy, Hit Girl and Red Mist standing to attention on rooftops. It also boasts DVD versions not only of the film but the Special Features too, which is perfect if you have, for example, a Blu Ray player in your lounge but a DVD player in your bedroom, or want to watch it on a laptop but don't fancy forking out the best part of a grand on one with a built in BD ROM.

If you have a soft spot for superheroes then there's no doubt that Kick Ass will be for you and for the sake of a few extra quid this is certainly the best package to enjoy it!
続きを読む
2人のお客様がこれが役に立ったと考えています
違反を報告
レビュー を日本語に翻訳する

SimyJo
5つ星のうち5.0 Combi Pack Kicks Ass
2010年10月27日に英国でレビュー済み
Amazonで購入
Great film, , nice retro-styling steelbook art, quality disc presentation and colourful disc-art (unlike Iron Man 2 which had lazy undecorated silver discs) - This is the definitive Kick Ass. Over 2 hours of great extras along with stylised kick-ass menu UI art, a crystal clear print and thumping 5.1 DTS-HD audio track. The added copy of the film on dvd is great if (like me) you were between hardware tech at time of release and didn't fancy buying the film twice over.

The features?..probably not worth trading up to extras-wise if you have the ordinary blu-ray version already, but if you have held off buying this future classic on the superhero genre to see in beautiful 1080P high definition... then THIS is a beautiful pack.

The film?, a great screenplay by Jane Goldman authentically adapted on the Mark Millar graphic novel - A future classic!, so many laugh out loud moments and great quotable lines from "f**k you Mr.Bitey" to "with no power comes no responsibility" and really strong performances from Chloe Moretz (whos talent for x-rated comedy belies her age), a funny adam west impersonation from Nick Cage (whom Batman-fans will laugh at) and Mark Strong whos rocking performance playing the villain is so good you end up both laughing at, and rooting-for him.