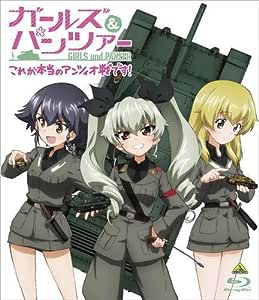 Steve
5つ星のうち4.0 More Great GaruPan, even without subtitles
2015年2月5日にアメリカ合衆国でレビュー済み
Amazonで購入
“This is the Real Anzio Battle!” is an Original Video Anime, a double-length episode that falls at the end of Episode 7 in the TV series. It's IN JAPANESE. There are NO SUBTITLES. It's still PRETTY GOOD.

First thing I noticed was that it was packaged for the Japanese market. That is to say, no security tags and no impenetrable seals. Break the flimsy plastic wrap and you’re in. Additional swag is minimal — a book of screen-shots and tank specs, and another one of character pencil sketches.

Watching it in Japanese without subtitles was fun, and frustrating, because I can only pick up one word in twenty or thirty (OK, forty). On the other hand, this was GaruPan at its finest, and much of it didn’t need translating. The one place I missed it most was the meeting between Suzuki Takako (AKA Caeser) the Roman history expert and gunner for the History Club’s Hippo Team and Hina-chan (AKA Carpaccio), a childhood friend with a similar interest in things Italian, now attending Anzio.

I won’t go into a lot of detail, because spoilers, but there are some plot elements that I think it’s OK to talk about: like Yukarin pulling another intelligence mission onto the Italian school ship (based on the never-completed WWII Italian carrier Aquila), and the fact that, this being an Italian school, food plays a big part (Yukarin has a plate of the Anzio School’s idea of omurice — omuspaghetti). Otherwise, much of the first half is a training montage.

The Anzio tanks are typical of the poor-quality systems Italy fielded in WWII, all the more so because Anzio’s finances are in a typically Italianate state of disrepair. Their big gun tank is a Carro Armato P-40 (75mm gun), equivalent to the PzKwIV, purchased with their lunch money; they have several M41/Semovente 75/18 self-propelled guns, equivalent to the Hippo Team’s STUG III with Caeser‘s friend Carpaccio as the gunner for one of them; and a bunch of cute little CV33’s, more properly called tankettes.

On the Oarai side we only have the original five tank teams – we see the Porsche-Tiger being overhauled, and the Hall Monitors have only just signed up.

The battle starts with a [redacted] surprise, and soon breaks up into a running fight between the P40 and PzKwIV, a slugfest between Caeser and Carpaccio in their self propelled guns, and everybody else and all the CV33’s that are scampering around like well-armed mice. It’s exciting and hilarious at the same time. It ends with a re-enactment of the closing scene from Episode 7, after which there’s a party. And after the final credits, which for once include the opponent’s tanks and not the Oarai tanks, we find out why “Duce” Anchovy didn’t show up in Episode 11 to congratulate the Oarais.

This OVA was a little more cartoony than the standard episodes – the Ducks pick off CV33s running along a ridge like they were targets in a shooting gallery; the CV33s keep flipping over and over and ending right side up, the two SPG's spend as much time ramming each other as they do shooting. Since it doesn’t mean much if you haven’t seen the original anime, I think all of this was the production team having fun and dropping in in-jokes and playing off tropes. They skimped a little on the animation, but not where it counted. So, the food scenes were mostly stills, and in one shot of the Rabbit Team zig-zagging it was just the girls heads that moved. On the other hand, all the combat was animated with the same loving skill as the original anime.

Extras include a discussion of Italian tanks by Yukarin and Anchovy (in Japanese, follow along with the pictures), and coverage of a couple of the Oarai GaruPan festivals, including appearances by some of the Seiyūs (which end up looking about as inane as those things usually are).

If you’re a GaruPan fan, it’s worth spending the Japanese import price and putting up with the lack of english. Maybe you only get half of what’s going on, but with GaruPan, that’s still 10% more entertainment than any other anime will give you. If I could understand what they were saying, I'm sure I'd give it five stars
続きを読む
6人のお客様がこれが役に立ったと考えています
違反を報告
レビュー を日本語に翻訳する