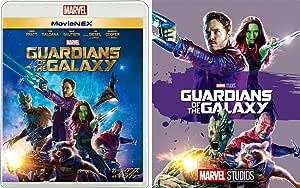 Valerie J.
5つ星のうち5.0 Excellent BluRay - Love the movie
2018年3月16日に英国でレビュー済み
Amazonで購入
Although Guardians of the Galaxy (2014) has a few moments of corniness, generally speaking it's an hilarious, action-filled fantasy/sci-fi with convincing visual effects, whacky characters, and a great script. The cast is surprisingly star-studded with Chris Pratt in the leading role and arguably more well known stars taking back seats. For example, Glenn Close and Benicio Del Toro have minor roles. Nathan Fillion of Serenity-fame merely does the voice-over of a minor player, and Josh Brolin, as Thanos, is uncredited. Speaking of voice-overs, what a pity that only the voice of Vin Diesel, a favourite of mine, was used in this lively escapade. It seems such a waste and it surprised me that he wasn't cast in the role of hunky Drax (one of the good guys) which went to Dave Bautista, a WWE champion. Having said that, 6ft 4in Bautista, didn't disappoint. Quill is one of the few Earthlings in this 'out there' extravaganza, and the variety of aliens runs from a hard-nosed green woman (Zoe Saldana), to blue men (Michael Rooker), to a magical and daunting tree giant called Groot (voice of Vin Diesel) and an irascible raccoon-like invention called Rocket (voice of Bradley Cooper). My favourites in this movie though, and I expect they are the favourites of many, are the nutty duo: Groot and Rocket. They could have a show of their own. Groot can only say 'I Am Groot' which means that Vin Diesel wouldn't have needed to spend hours learning his lines. I wonder how much he got paid? Rocket was a psychiatrist's dream or nightmare, and the funniest of the lot. Talk about complex. Ronan kept reminding me of Tom Hiddleston's Loki, except that Ronan's lugging around a great big (Thor-like) hammer. And, if all that isn't enough, the Guardians of the Galaxy soundtrack is a treat.

So, what's not to like? Guardians of the Galaxy is such fun. I saw it some time ago and decided to buy the BluRay because I have just ordered the Guardians of the Galaxy II, and I wanted to watch the first one first, if you get my meaning. The video and audio of the BluRay are excellent. The movie has such vibrant colours with equally vibrant characters. The soundtrack is superb, especially if you enjoy the early 70s music, and I do, and it fits the tone of the movie perfectly. The character, Peter Quill, who likes to be called Star Lord (Chris Pratt) loves his ancient Sony Walkman and the cassette he plays upon it. He will burst into dance at the strangest of times. Don't we all???

The BluRay comes with the usual extra which shows us how the movie was made. I would suggest that anyone new to the movie should watch the extra afterwards as, for me, finding out how special effects are done can spoil a movie for me. Who wants to visualise wires or a blue screen while trying to be mentally transported in the movie's world?

If your spirits are low and you need a bit of a lift and your sense of humour remains intact, check it out. Oh, and it's not for young children.
続きを読む
18人のお客様がこれが役に立ったと考えています
違反を報告
レビュー を日本語に翻訳する

J. McDonald
5つ星のうち5.0 Guardians Of The Galaxy.
2017年4月12日に英国でレビュー済み
Amazonで購入
Another entertaining, smart and slickly presented offering in the Marvel canon.

A relatively minor group of misfits (as opposed to better-known groups of misfits like the X-Men and Avengers) become the unlikely heroes in preventing a powerful artefact from falling into the hands of a seriously bad inter-galactic warlord; its all very tongue-in-cheek stuff with a wonderfully cheesy 80s pop music sound track and lots of CGI, but it is wildly entertaining. Karen Gillan (of Dr. Who) is unrecognisable as the sadistic Nebula.

Well worth checking out, this is a good couple of hours of escapist entertainment.
The DVD has no worthwhile extras beyond a deleted scene and some trailers, but there are subtitles and audio description.
続きを読む
4人のお客様がこれが役に立ったと考えています
違反を報告
レビュー を日本語に翻訳する

bailey
5つ星のうち4.0 Pure Escapeism
2016年10月29日に英国でレビュー済み
Amazonで購入
This film was quite funny and violent at the same time, the casting of Vin diesel as Groot was weird to say the least, a question remained unanswered at the end of the film though in how does our hero become part alien in the first place? as this isn't revealed unless I missed it, but a great typical Marvel film and a promise of more to come of the Guardians I think the cameo appearances of Stan Lee in Marvel films is hilarious I cannot help but look for him, reminiscent of the Old Alfred Hitchcock films. I will not give the plot away in case it detracts others from watching it, you just have to see it to make up your own mind, but for what its worth it was a great film, the only reason I give it 4 stars is because I would have liked to know about the origins of our Hero before the film got underway in full swing and not leave any questions unanswered.
続きを読む
2人のお客様がこれが役に立ったと考えています
違反を報告
レビュー を日本語に翻訳する

Pastychomper
5つ星のうち5.0 Comic space opera, only one wooden character.
2019年7月24日に英国でレビュー済み
Amazonで購入
I usually like Marvel films but avoided Guardians of the Galaxy for a while because the setting and species-pot-pourri crew looked a bit too cheesy.
I needn't have worried. It's good Marvel stuff, a bit lighter than some but with a decent story-line and plenty of laughs. The less humanoid characters are a credit to modern(ish) CGI, with very believable presence and expressions.
There was on big scene where I found myself feeling no longer immersed in the action thanks to the cartoony over-dramatisation, but that's my only complaint and really a very small one in a really good flick.
続きを読む
違反を報告
レビュー を日本語に翻訳する

Mr. Benjamin J. Raddon
5つ星のうち5.0 This is so much fun
2016年2月29日に英国でレビュー済み
Amazonで購入
This movie was a huge risk for Marvel Studios, it was the first time they took a chance with characters unfamiliar to a lot of people, the 2nd big risk they took was Ant-Man a year later.

Now one of my favourite movies, Guardians is just.........fun, lots and lots of fun, plus it's also really cool, it has a talking Racoon who fires a huge rifle for crying out loud, that could have easily been stupid but ended up being one of the best parts of the movie.

This movie wasn't just successful, it was a major hit. My younger brother and both parents also thoroughly enjoyed this movie, especially Groot, and trust me, that's a pretty big deal. In a way, it's crazy, some parts a really crazy, this movie isn't a typical Sci-Fi movie, and it is silly in places, but that doesn't matter, it all adds to what I said before.....so much fun.

It will be interesting to see where they go next with these characters. We have only until next year (2017) to wait, and we also get the new addition to the Marvel cinematic universe, the new 15 year old Spiderman in Spiderman:Homecoming. Let's go Marvel.