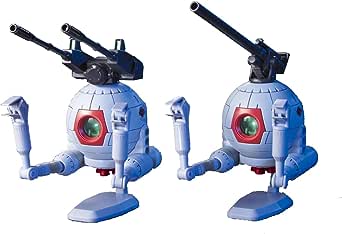 R3tr0c4t
5つ星のうち5.0 BALLS - The most fun with BALLS you can have before going NC-17
2018年9月22日に英国でレビュー済み
Amazonで購入
You know what's better than one kit that's simple, detailed with goods parts separation and surprisingly well articulated yet simple arms? Two of them in a single box. Not simply do you get one ball, you get two balls. Two balls with two choices of gun for each one long and one short but double. These Balls aren't balls at all, they're actually really really good. Bonus simple flight stands included. Transclear parts. Lovely little set of two fine balls. They also fit very well upside down on the neck-joint of a beargguy petit. BALLS!
続きを読む
役に立った
フィードバックを送信中...
フィードバックをお寄せいただきありがとうございます。
申し訳ありませんが、お客様の投票の記録に失敗しました。もう一度試してください。
違反を報告
レビュー を日本語に翻訳する

NellyD
5つ星のうち5.0 A Must Have In Your Collection
2016年5月12日に英国でレビュー済み
Amazonで購入
Quite simply brilliant... an awesome model kit at a very reasonable price, this is perfect for anyone starting out in the Gunpla world, the unit itself is an RB79 Ball which is middle ranged battle unit that supports the RGM 79 Units and ships to battle the Zeon forces.
The Ball is the first unit introduced to us in the original Gundam series where Amaro spots an ally in trouble and he challenges the Zaku with the Ball.
Now for the model it's perfect it's made of of a good quality plastic that fits together nicely the instructions as always are very clear and the instructions are used to build both at the same time if you wish to, there is a great deal of panel lining (adding defining marks) to do which is perfect practice for any Gunpla enthusiast.
The main tools used for this particular kit are : Side cutters, Hobby knife, Sandpaper (1000 Grit +) or Nail Buff pads, 0.5 mm Black Micron Pen, and Gundam Fluorescent Green eye colour pen (optional it is for gun sights) .
The conclusion is a very nice build and very simple, with care it can look pretty amazing, i have added photos to the review so you can see the examples of how the box comes and how the models look when you panel line and add that little extra detail.
I have reviewed many of the Gundam builds on Amazon now so feel free to read some other of my reviews if your starting out or shopping for that next model you will enjoy.
続きを読む

Yao
5つ星のうち4.0 HGUC Ball Twin Set
2015年7月4日にアメリカ合衆国でレビュー済み
Amazonで購入
As a kit from 5 years ago, I didn't have the highest of expectations for the ball. Sufficient to say, the Ball fulfilled those menial expectations. Sculpt work on the Ball is great, and it looks like it jumped straight out of the TV screen. Luckily the Ball is one of those Mobile Suits (yeah... no. The Ball is a "Simplified Mobile Suit", and sometimes just classified as a "Mobile Armor") whose design wasn't too drastically altered by HGUC, though somehow there were still issues. The Ball's clear green dome for the cockpit is in the wrong color. The green is supposed to be a clear forest green, or grass green at the very least. However, Bandai opted for yellow-green on the dome here. while not too distracting, the plastic hue could have been, and should have been different.
Construction-wise, the Ball twin set is a repetitive bore. The kit contains NO POLYCAPS. None whatsoever. For a kit from 2010, that's quite depressing, as even the most basic of kits used those rubber pieces to ensure tighter joints. Furthermore, since this is a twin set, there are only 3 real plates of parts, each duplicated once for the illusion of 6. The Ball is a very simple design, and it was replicated well, and the articulation is fine as it is. The arms move around on a ball joint at the connection with the body and hinges everywhere else. I am glad that such a simple kit doesn't require painting.
Accessory-wise, its a strange ordeal. The Ball includes stands for elevated display. However, the stand has a wring around it, which covers up the thrusters on the bottom of the Ball. Each Ball also includes swapable cannons, going form the 180 mm Low Recoil Cannon to the Twin Cannon. I have no clue what the twin cannon is for, since I've never seen it on TV or in any game whatsoever. I honestly don't understand.
In the end, after so much bashing, I have to say it: The Ball set is worth getting, especially if one has a GM that's lying around. However, the issue here is the price. Released at 1200 yen, I honestly don't think there's enough here to justify the price. However, if one finds it at a sale, go for it. No problem.
続きを読む
4人のお客様がこれが役に立ったと考えています
役に立った
フィードバックを送信中...
フィードバックをお寄せいただきありがとうございます。
申し訳ありませんが、お客様の投票の記録に失敗しました。もう一度試してください。
違反を報告
レビュー を日本語に翻訳する

Adventure Reader
5つ星のうち4.0 Great Gundam accessory that is easy to build.
2015年10月10日にアメリカ合衆国でレビュー済み
Amazonで購入
No glue or paint necessary.
This is a fairly good model kit since it comes with two Ball vehicles and two sets of interchangeable weapon systems (single- or double-barreled cannons). However, the joints and connection points for the arms are a bit unstable. They will stay in place, but they make become disconnected while you move or re-position them. It is not an overly complicated model kit -- given the nature of the vehicle -- and after constructing the first Ball, the second one will be less problematic.
I did not paint my models, but I imagine a black Gundam detailing marker and a spray can of clear coating should be enough to give the vehicles a more authentic look.
続きを読む
1人のお客様がこれが役に立ったと考えています
役に立った
フィードバックを送信中...
フィードバックをお寄せいただきありがとうございます。
申し訳ありませんが、お客様の投票の記録に失敗しました。もう一度試してください。
違反を報告
レビュー を日本語に翻訳する
すべてのレビューを参照します
同様の商品をご覧になりませんか？ こちらのリンクで参照ください。ガンプラ
Amazonプライム会員ならお急ぎ便、日時指定便が使い放題
さらに、映画もTV番組も見放題。200万曲が聴き放題 。クラウドに好きなだけ写真も保存可能。
> プライムを無料で試す