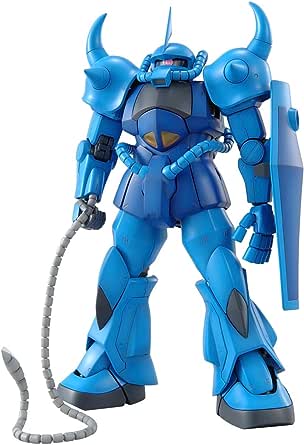 thomas
5つ星のうち5.0 Zeon
2020年9月25日に英国でレビュー済み
Amazonで購入
Do you want to crush the federation's forces but your Zauk II is getting a bit slow and old.
Well nows your chance get a gouf

All in all this is a good kit I think I only started this hobby over lockdown and love it. I have been building models for years and with this no glue so win win
続きを読む

Yvonne Marie Chinn
5つ星のうち5.0 This is no zaku boy, no zaku!
2015年9月4日に英国でレビュー済み
Amazonで購入
first off i just want to say something about the seller, fantastic not only did the goods come on time but it came with a little extra, not only would i buy from them again i would highly recommend this seller.
the kit itself is fantastic, i built my kit over the course of 5 or so hours with breaks and watching tv but the build is super involved and allot of fun.
the kit looks brilliant unpainted and without decals but i chose to add some
it arrived factory sealed and in wonderful condition the way it was packaged was exceptional.
続きを読む
違反を報告
レビュー を日本語に翻訳する

Glynn M.
5つ星のうち5.0 Good build, extra pieces, and tedious pipes
2019年9月19日にアメリカ合衆国でレビュー済み
Amazonで購入
In-universe, the Gouf was meant to be a replacement to the MS-06 Zaku II on Earth. While superficially appearing similar to a Zaku, the differences in terms of performance specs and internal mechanisms were vast. In terms of the model, the latter becomes evident.

Some pieces are constructed very similarly to the Zaku II, as the kit even shares runners with the Zaku. However, many pieces end up being left over, so they may be used as spare parts for any MS-06 kits one may have on hand.

The Gouf feels fairly sturdy, just like the MS-06F I assembled weeks ago. The Zeon kits seem to have hardy joints, which makes posing a little arduous due to its resistance, yet ensures that it doesn't droop its limbs. As well, the model has good articulation, given that it is a Master Grade 2.0, the take note that the shoulders are inhibited by the pauldrons, which do not fold outward as much as a Zaku's.

The kit comes with some duplicate runners; these runners are meant to be used for the limbs, such that one pair of duplicate runners is used on the legs, and the other on arms. Just an FYI, in case anyone thought the workers sorted wrong! As well, the kit also comes with two different left hands: the iconic hand vulcan, and a regular left hand. I personally favored the normal hand as I intend to have the Gouf wield a normal machine gun as its main weapon. Unfortunately, there is only a left hand vulcan, so the right hand will always be a regular manipulator. The other weapons include the heat rod, which can be attached to the left or right arm, and the heat Saber. Interestingly, the Gouf is able to hold Zaku weapons as it has the pegs in its hands for it.

The most frustrating part of the kit, just like the Zakus, would be the cables/pipes. To construct them, a long piece is taken from a one runner, then aligned to another runner where the individual segments are cut out and slid along the long piece. The process is tedious and time-consuming, as the nubs can also be hard to remove and clean up. In the event of a mistake though, there are extra segments just in case.

Overall, this kit was satisfying to build. Once getting past the hard part of the pipes, the kit becomes smooth sailing. One should not regret purchasing this one!
続きを読む

Teddy L.
5つ星のうち5.0 Excellent Master Grade
2020年10月2日にアメリカ合衆国でレビュー済み
Amazonで購入
My fourth master grade, Excellent kit and one of my favorite Zeon mobile suits, extremely sturdy and incredibly fun to pose. My only complaint would be that the piping on the head and waist sections are somewhat annoying to assemble. Otherwise this is an excellent master grade and I would highly recommend it.
続きを読む
違反を報告
レビュー を日本語に翻訳する
すべてのレビューを参照します
同様の商品をご覧になりませんか？ こちらのリンクで参照ください。ガンプラ
Amazonプライム会員ならお急ぎ便、日時指定便が使い放題
さらに、映画もTV番組も見放題。200万曲が聴き放題 。クラウドに好きなだけ写真も保存可能。
> プライムを無料で試す