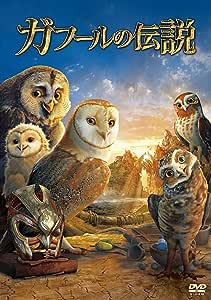 Ian Edgar Paul Woollard A.R.P.S.
5つ星のうち5.0 Visually superlative
2012年10月12日に英国でレビュー済み
Amazonで購入
I did not see this animation at the cinema other than the trailer.I had rembered this from the visual impact at the time and was drawn to my own purchase of the3d blueray on the basis of it being based on a fairly successful childrens story of some note. As i now tend to have family viewing evenings of 3d spectacullars I am allways looking for new 3d discs suitable for family viewing whilst being genuinely entertaining for the adults present.' Legend of the Guardians' falls well into this category in that, whilst having a fairly simple plot line,(good versis evil etc) its just interesting enough to act as a superb vehicle for the outstanding quality of the graphics, possible the best i have ever seen. The detail in the structure of the feathers on the owls is quite spectacular and the sequence of flight over the sea with the addition of water droplets to the texture of our heroes coates is far and away the most stunning I have ever experienced from this medium. If you can cope with what is essentially childrens entertainment and appreciate the sheer quality of the presentation of the same then any purchase will be money welll spent and i am sure you will be happy to re watch it time and again to as many invited audiences as you can call on or by yourself, marveling at the realism of what is essentially electronic artistry of the highest standard. IEPW.
続きを読む
3人のお客様がこれが役に立ったと考えています
違反を報告
レビュー を日本語に翻訳する

Keith England
5つ星のうち5.0 Incredible in 3D
2015年2月16日に英国でレビュー済み
Amazonで購入
Having just got a 3D capable Denon 1713UD this looked worth getting to try it out. The film is stunning in 3D, beautifully rendered such that I'm sure you can see every feather. It is subtle 3D, not in your face effects like (say) Journey to the Centre of the Earth. It was an enjoyable film to watch as well. Like others, I really don't think this is a children's film, as well as being quite dark (Orwellian) it is longer than most children, certainly under 12, would sit through. I'd recommend it For older children and adults though.
続きを読む
2人のお客様がこれが役に立ったと考えています
違反を報告
レビュー を日本語に翻訳する

harpoon guns to 'safe', please
5つ星のうち3.0 Visually lovely
2013年3月3日に英国でレビュー済み
Amazonで購入
BUT seriously let down by a story that is by turns silly, derivative, predictable and sometimes downright tedious, and about which it is hard to say anything good; it does not know whether to be serious, humorous, or Disney syrup- it does none well.

Many reviewers comment on the distinctive nature of each owl's charater, but that's hardly new, and a number of different species are represented to make this easier. Over twenty years ago, a similar number of different rabbit characters were established in Watership Down, so this is hardly an impressive feat.

The failure of the storyline is a real shame, because the animation is of a standard that I have probably never seen bettered, perhaps not even equalled.

However, the gross-and it is gross- failure of the story drags it down to a possibly generous three stars, but really, it does look gorgeous.It should have been so much better.

doug bassett
5つ星のうち5.0 Amazing!
2011年6月17日に英国でレビュー済み
Amazonで購入
I bought this on bluray when it first came out but it ended up sat on my shelf until just last night! I'm a huge fan of computer animated films but there has been a real drop in quality for most that have hit the big screen in recent years. I think thats why this film didn't make it straight in to the player when it arrived in the post!

I'm so glad i finally got round to watching it!! I was completely blown away from start to finish.. this could easily have been a pixar release! you are instantly taken in to a world so stunning and beautifully animated that you are compelled to continue watching. Some reviews state that there is not not enough character development which is true to some extent... this film could easily have been spread over 2 films rather than one! I don't think though that this is a reason to mark it down in any way, it just shows how drawn in to the story you can get and how desperately 'as an adult' you crave more and more from it! Overall for the target audience this film is simply 'perfect' (i wish i'd have seen it as a kid!!!)... The characters are very well balanced and play off of eachother perfectly, theres plenty of fun, drama, lots of action... what more could you ask for?!

richard
5つ星のうち4.0 Stunning 3D wrapped in a family friendly adventure
2016年7月4日に英国でレビュー済み
Amazonで購入
Fairly standard good vs evil family viewing, some novel elements to the story and setting - hints of Tolkien, Star Wars and even Watership Down.

However if looking for 3D to wow then this is near the top of the list. Best 3D I have seen so far, some sections truly stunning and make a good argument for 3D being worthwhile (watched on LG 55EF950OV if that makes any difference)