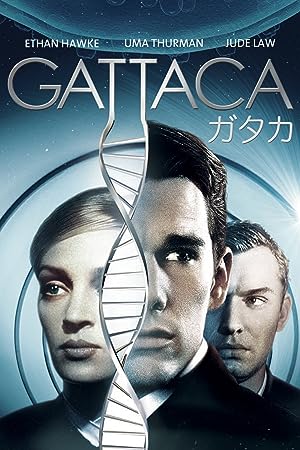 cora
5つ星のうち5.0 Incredible Film - DVD is an awkward two sided affair (good picture and sound though)
2020年1月29日に英国でレビュー済み
Amazonで購入
This is one of the most amazing films I've ever seen. It's intelligent, it's thought provoking, it's incredibly elegant. Add to that a befittingly beautiful original score and a cast who deliver outstanding performances all round and you got a true masterpiece of a film. And this from somebody who doesn't normally do Sci-fi. But here's the thing, while it's definitely Sci-fi, this film is so much more: it's a clever who-done-it, it's a tale of deception, there's a romance, and a bromance.

The story centers around Vincent (Ethan Hawke), a genetically inferior man who takes on the identity of Jerome (Jude Law), genetically engineered to be perfect, but lacking in spirit and crippled after an accident, in order to realize his dream and be selected to travel into space. This grand deception threatens to come out when a director of the space program is found murdered and a couple of tenacious detectives appear on the scene.

The cast is exciting even by today's standards with Ethan Hawke and Uma Thurman in the lead. The metamorphosis of Hawke's character from the lowly worker with all kinds of imperfections into, well... Jude Law, is quite amazing. Thurman is perfect as his aloof love interest in a world where lover have each other genetically sequenced before going on a date. Jude Law is excellent as the disillusioned Jerome. In further supporting roles you have Alan Arkin as detective and the great Ernest Borgnine as a janitor.

I love the deceptively simple way they went about creating the "not-too-distant future". Clean lines and minimalist interiors devoid of any trace of personality, everybody wearing generic business suits and sporting 50s haircuts. Absolutely love it when the crew walks into the space craft in their suits and ties. The ending is one of the best I can think of - absolutely perfect and lyrical beyond words. Fantastic film all round and recommended on every level. Even if, like me, you don't do Sci-fi.

As to the DVD I bought (see attached photo). Picture and sound are good, subtitles are available for those who need or want them. However, the DVD is one of those rather awkward double sided affair with no clear labeling. Apparently one side features a widescreen presentation of the film, the other side a full screen version. For me it was basically a matter of trial and error: insert the disc, select play and see what appears on the screen. I got it wrong first time round. Others may be cleverer with these type discs. The same extra features are included on both sides of the DVD. They are:
~~~ Theatrical Trailer
~~~ Documentary [making of featurette]
~~~ Lost Scenes
~~~ Poster Gallery
~~~ Photo Gallery
~~~ Filmographies
続きを読む

Boomeringue
5つ星のうち5.0 Underrated Thought-Provoking Near-Future Sci-fi
2020年9月16日に英国でレビュー済み
Amazonで購入
One of my favourite films - been looking for a while for it on Bluray. Not a technical expert but on my average 4k TV & player the picture looks fabulous.
Version I got looks to be European - all the packaging text is in German with a green FSK/12 logo on the front corner. Menu & film itself though default to English with no subtitles.
Don't want to give away too much of the plot but the film is set in a near-future society where someone's genetic makeup determines their place in society. Those with sufficiently accurate DNA are described as 'Valid' and those without are referred to as 'Invalid'. One of the organisations in this society is the Gattaca space exploration corporation who only recruit Valids with the most perfect genetic profiles. The story follows someone (Ethan Hawke) who is an Invalid, but wants to travel into space and how he goes about achieving his goal.
Along the way though you get to appreciate the fantastic sets, retro-style outfits and understated acting of the cast. The interior & exterior of a Frank Lloyd Wright building in California is heavily used as a location and it suits the film perfectly.
Its not an action film - and there are no spectacular special effects - but its hugely thought-provoking around genetic selection, nurture verses nature, and human potential and achievement.
If you like great looking, intelligent sci-fi that will stick in your mind long after the end credits this is a film for you.
続きを読む
違反を報告
レビュー を日本語に翻訳する

TONY MEREDITH
5つ星のうち4.0 One of those milestone movies you just gotta have
2018年9月2日に英国でレビュー済み
Amazonで購入
I'd seen this before but decided to buy the DVD as it is one of those movies that sticks in your mind. I'm glad I did as this is a classic which is probably rather underrated for whatever reason. The time of genetic discrimination is not yet upon us but it is only a matter of time. I sensed parallels between this and the classic Blade Runner, which in a similar (although of course much more classic) way probed the discriminatory environments which we are yet to enter - in BRs case with androids of course.
続きを読む
1人のお客様がこれが役に立ったと考えています
違反を報告
レビュー を日本語に翻訳する

Doot Dee Doo
5つ星のうち5.0 Exceptionally beautiful music.
2017年1月9日に英国でレビュー済み
Amazonで購入
Same as almost everyone, I saw the film and was very struck by the beauty of the soundtrack music. I'm very pleased to be able to get it on CD and it doesn't disappoint - very moving. The only drawback is the film, itself a really exceptional piece of work but so horrible in what it shows as a future. There's love in many ways, that survives, but it's corrupt and criminal love. All legitimate life forbids it. In such a world, I'd use the escape hatch for sure. This beautiful soundtrack captures and evokes great sorrow, a most unhappy world.

This future is on its way. It probably won't be as tidy as Gattaca though. It will be far worse.

That Michael Nyman though, he must have a head the size of Einstein to keep track of and put together "The Morrow". I wouldn't like to have to try to play it!
続きを読む
3人のお客様がこれが役に立ったと考えています
違反を報告
レビュー を日本語に翻訳する

I give no apologies for this review, it is completely biased one, first things first, and this review is about the `Superbit' circ 1998. If this review is found next to another format version, please ignore.

A genetically inferior man assumes the identity of an enhanced genetically tweaked superior individual in order to pursue his ultimate dream of space travel; by doing this, he has committed the “crime” of using a “borrowed ladder” – by using the genetic profile of another person. Gattaca is in many ways is one the best films I have saw'. Just as people have been judged for centuries by the colour of their skin, their class or religious persuasion Gattaca predicts and explores the future where there will be a more subtle discrimination. It being a science fiction film helps make it more effective by allowing us to feel the emotions of the characters with little of our own history getting in the way. A haunting musical score goes well with the feeling of the film, with stunning visual backdrops and the very clear use of tinted lenses makes each scene vibrant eye candy.

Ethan Hawke as Vincent does a sterling job of displaying how the odds are stacked against from his very inception! This is someone whose life is limited before he even tries. However, just as fascinating were the theoretically superior characters; Vincent's girlfriend, brother and his genetic original who suffer from the lie that genetics can perfectly predict a person's life.

This disc plays well on a number of first generation DVD players. The colours are solid the sound is excellent; please note I did not try out the various sound enhanced systems, i.e. 5.1 Dolby, as I do not have this equipment. That said, the Superbit DVD was played on HD DVD player and HD Flat screen TV. The experience is mind-blowing; I cannot see the difference between picture quality on this DVD and some of the newer HD DVD releases. OK HD DVD is a defunct format, but it shows that upscaling this DVD gives it 'Angelic wings'. Is it worth buying? The answer is yes. This Superbit DVD makes a fantastic film, even more mind blowing.

Some years ago at a film event, I asked Ernest Borgnine, who played the janitor in the film, what he thought of GATTACA. In a rather dismissive way, he said he did not get it. Well, 'that is his flawed genome. If you would like to see a sci-fi film that is based on curious characters and thought provoking circumstances - and not explosions, try Gattaca. Enjoy!