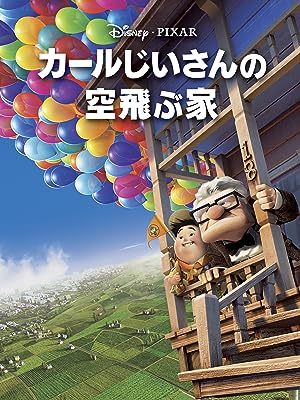 ino
5つ星のうち5.0 best movie ever
2020年3月15日に日本でレビュー済み
Amazonで購入
Flying with a thousands of balloons has been a dream for human beings and I'm glad to see its success in this movie.
Moreover the beauty of the love touched my heart. I really love it.
続きを読む
2人のお客様がこれが役に立ったと考えています
役に立った
コメント 違反を報告
レビュー を日本語に翻訳する

Picard
5つ星のうち5.0 UP there with the best (Blu-Ray + DVD Review)
2010年2月16日に英国でレビュー済み
Amazonで購入
I seem to get more and more surprised with Pixar releases - the company continue to produce wonderfully imaginative films that are an alternative to the more standardised Disney-solo efforts these days. In my view, I feel that 'UP' represents the quality of film-making that Disney always used to aspire to back in the earlier hand-drawn days, though given a modern twist to appeal to a new audience which I think attracts both adults and children more equally.

No doubt it is argued by many that both Pixar and Disney are responsible for some controversial decisions lately; more often than not, it was a minority of Americans that felt 'Wall-E' demonstrated environmental concerns, which was apparently a problem as were all supposed to sit on our backsides doing nothing, and that the protagonist in 'Princess and the Frog' has no right to be black, because Princess are supposed to be trim, pale figures with blonde hair (Courting a Prince with as much personality as a Prune. Sorry Walt!). The good news is that 'UP' has very little content for the P.C brigade to pick up on!

After discussing the film with others, it was always the opening scenes of the film that came to conversation - a wonderful reel of sequences that fast-forwards the life of Karl Frederickson - a quiet young boy who aspires to venture out to the mystical Pleasure Island with his new friend, Ellie - both of them being avid explorers. But the Karl of the modern day is a grumpy old man who is in danger of being sent to an elderly folks home when the plots of land around his house are being developed for new buildings. Trust him to remember the joy he once had of having his own balloon stand in his younger days, eventually leading him to the quick conclusion that he could sail up, up and away with his beloved home and escape to the Island he always dreamed of... Despite my reluctance to give away more information, the film truly unfolds into an unexpected adventure.

As to be expected from Pixar, the visuals are gorgeous and continue to exceed any films before it (possibly even Wall-E). The directing was noticeably very effective - key frames were well thought out, but the film never strays into a dizzying 3D environment, but rather having a more linear look in the layout terms which helps the travelling theme to the film. Whereas other CGI film companies tend to faff around with annoying camera angles and visual oddities, Pixar have always been careful to use the computer medium to its advantage - creating situations that would have been impossible with traditional animation techniques, yet never too far away to suggest we haven't learnt anything from the past 70 years.

I also found the balance of 'Humour and Heart' perfect; granted, I read before writing this that many reviewers suggested their kids either cried too much or didn't laugh enough. Given that companies like Pixar will always be in the shadow of the Disney 'Golden Age', I can only laugh at such suggestions. Films like 'UP' are an incredible achievement when so many themes and standardisations have been run to ground in films over the years - to continue to produce such original content is what makes Pixar so special. The way they can balance Humour and Heart should be recognised as a fantastic quality, given how mushy and lifeless many "kids" TV/film content are these days (Hannah Montana? Yuck). If films like this are considered too distressing for 'darling children', I really don't recommend subjecting them to the wonderful morals demonstrated in films like Pinocchio (1940) - masterpieces of film-making.

'UP' possibly ranks as Pixars most adventurous outing, and no doubt one of their best along with the likes of Toy Story, Wall-E and Monsters Inc. In fact, the only issue I have with the product is that of Disney's incompetence regarding release schedules. I've found it quite frustrating that 'Fantasia' Diamond Edition has yet to be officially announced in the U.K, yet in the U.S, a trailer was released a month ago on their release of 'UP', available via BD Live, yet no trailer has even been put on this Blu-Ray/DVD. Whats even more puzzling is that the discs contain trailers from back in October! Come on Disney, all we want are dates... My only guess is that the trailer will be put on 'Dumbo', which is being released March 22nd if you're interested. That is currently available to Pre-Order, why not go check it out?

To try and summarise though, I think 'UP' is just a genuinely heart-warming film that, granted, simple in plot, proves you can pack a lot of entertainment in to such a basic concept. The Blu-Ray is, as usual, of amazing quality and far more so than the DVD - bear in mind however that, as with any Blu-Ray, you are really only going to see the benefits to a good degree on a 30-inch and bigger Television. This is the point at which DVD's really become 'softer' and Blu-Rays only start to show how detailed they can be. To be fair however, our TV is only 26-inches and the difference is still wonderful. God help us when Green-Ray comes out! Then Purple...

Regarding the other version of 'UP' that includes a "Digital Copy Disc", all that means is that it includes a disc that allows you to copy the film to your Computer so you can transfer it to an MP3 player with video play-back, or anything similar. Given that their are 'various' ways of easily ripping a DVD to ones computer anyway, the fact you could just 'place' the DVD in your computers drive to watch it (radical huh), and of course the fact that once you've used the Digital Disc its completely useless, I feel its poor value and wasteful on Disney's part. Never the less, I'm done ranting.
続きを読む
6人のお客様がこれが役に立ったと考えています
違反を報告
レビュー を日本語に翻訳する

Dr T
5つ星のうち5.0 Reference quality Blu-ray for Up
2010年3月15日に英国でレビュー済み
Amazonで購入
I sadly missed out on Up in the cinema (or in 3D). I was eagerly waiting for this Blu-ray Superset and was not disappointed. The transfer is breathtaking. Bar some issues in a dusk setting towards the end of the film, the picture is simply outstanding throughout. The style of the animation is also really impressive, with a diverse colour palette and plenty of variety.

The sound, as another reviewer has indicated, is excellent. During the action scenes it'll rock your room (at least in the Master Audio setting).

The film is also far more moving than I was expecting. Friends had told me it was good, but I'm not really one to buy into mass opinion that much. Still, very quickly I realised what all the fuss was about. It's really sweet and thought-provoking at the same time. Children will also love the balloons (which look wonderful on the Blu-ray), the animals, the boy and so on.

There are two nice additional shorts (of the same quality as the Presto and Burn-E extras on Pixar's WALL-E Blu-ray, I'd say). These are nice to see - and one features a story from the dog's perspective which, again, is great for the kids!

All in all then, it's a solid, five-star experience. Except... Really, what's with the whole 'Superset' format? There are FOUR discs in the box: (i) a digital copy (this may appeal to some; not so for me); (ii) the main Blu-ray (which is 5/5 great!); (iii) an extras Blu-ray disc (some nice stuff, but not warranting a separate disc in my opinion); then (iv) a DVD version. Apparently the DVD version has some extras that are not on the Blu-rays. I've not had time to check, but if so, that's a bit silly really. Pixar/Disney/Dreamworks et al. ... please take note!

I'm pretty sure all the content could have been squeezed into a far more economical overall package. Still the premium was not too much and the film itself, which was my main reason for splashing out, is excellent quality and I'll be returning to it time after time.
続きを読む
違反を報告
レビュー を日本語に翻訳する

A. Ingason
5つ星のうち5.0 The Opposite of Down
2010年7月12日に英国でレビュー済み
Amazonで購入
Pixar films are always very well written, produced and presented. When it comes to Up they've used a very lovely cartoony style, the animation and quality are stunning, especially in Bluray, there's no faulting the actual visual experience to be had from this film.

The story itself is imaginative and fun, it begins quite sadly though, a lot happens in a short amount of time and leaves you, as the viewer, feeling pretty rotton and sorry for the main character. But that soon changes, and is soon forgotton as the mood lifts and it creates a much more jovial atmosphere.

That said, the story is a bit far fetched, of course, but keeps in line right up until about 3/4 of the way through. Here some things really push the plotlines to the edge of wierd. But luckily it's well written and done in such a way as to keep you interested despite the odd... obscurities.

A brilliant film for the family, fantastic animation, great story and a great experience. Pixar, in my mind, have yet to put a foot wrong.
続きを読む
1人のお客様がこれが役に立ったと考えています
違反を報告
レビュー を日本語に翻訳する

C. Chivers
5つ星のうち4.0 An enjoyable Disney film in English and French
2019年4月18日に英国でレビュー済み
Amazonで購入
I really enjoyed the film that I saw, unfortunately the dvd didn’t work right through so didn’t see all of it but the part I saw I enjoyed. I thought Charles Aznavour was perfect as Carl Fredrickson and as good as Edward Asner. The company I purchased it from refunded my money.
続きを読む
違反を報告
レビュー を日本語に翻訳する

Adam Smith
5つ星のうち5.0 Possibly Pixar's best!!
2015年2月10日に英国でレビュー済み
Amazonで購入
This is a truly brilliant film and dare I say it a classic of the modern era. Won't go into too much detail about the film itself as I wouldn't want to spoil it for those who have not seen it. I heard how good this film is but I don't think words can do it justice. It really does have everything, a heartfelt story, sadness, humour, joy etc. This really is a film that children and adults alike can watch together and all find something from it to enjoy. If you can watch this in blu ray as the high definition graphics and seeing those balloons in it is a great experience. Disney Pixar doesn;t get any better than this!
続きを読む
違反を報告
レビュー を日本語に翻訳する
すべてのレビューを参照します
トップへ戻る
Amazonについて
Amazonでビジネス
Amazonでのお支払い
ヘルプ＆ガイド
日本語ショッピングのための言語を選択します。 日本ショッピングのための国/地域を選択します。
© 1996-2020, Amazon.com, Inc. or its affiliates