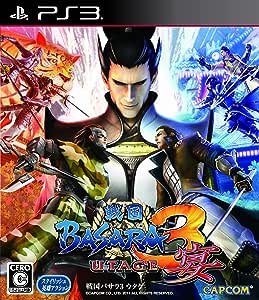 Brandon G. Zaad
5つ星のうち5.0 The game Hack N Slash fans have been waiting for.
2014年1月2日にアメリカ合衆国でレビュー済み
Amazonで購入
This game is absolutely amazing on almost every level.

The original Sengoku Basara 3 (Samurai Heroes) had only 3 modes to speak of: Story, Free, and Gallery.
Utage has: Story, Unification, Event, Versus, Free, and Gallery. It might not sound like much at first glance, but on the contrary it has several submodes inside them to keeps things fresh and exciting for months/years to come. One thing to understand is that this is an expansion of 3, as such the main story is found in that game, Utage's story is a supplement to it and as such it's story is shorter, linear, and easier given there's only 8 story characters as opposed to 16 in the original.

On the brightside however the game boasts a large roster of 30 almost doubling the roster of the original, each character with interesting and varied gameplay, no two characters play alike and that is to be commended. The gameplay itself is probably the best I've ever seen from the genre, people often say the masters of the genre are Koei with the Warriors games, and those games are great as well, but they only take advantage of two buttons on the controller, Sengoku on the other hand uses every single button giving you far more combat and combo options to have fun with.

All in all I'd say this is truly the best Hack N Slash I've ever played and it is well worth the price of admission. The PS3 is region-free so you can play this game on any PS3 without the need of hacking devices, just beware that without any english text in the game that you will be spending a lot of time looking at translation guides for the story and customization modes.

Amazon Customer
5つ星のうち4.0 It was incredibly fun, however
2016年12月29日にアメリカ合衆国でレビュー済み
Amazonで購入
It was incredibly fun, however, many characters have quite limited movesets, and there are just too many characters overall that undoubtedly made the creators kinda lack in creativity when making them. Initially seemed incredibly cool. Better than Dynasty Warriors though imo, pick up One Piece's warriors game for a more varied and colorful experience
続きを読む
役に立った
フィードバックを送信中...
フィードバックをお寄せいただきありがとうございます。
申し訳ありませんが、お客様の投票の記録に失敗しました。もう一度試してください。
違反を報告
レビュー を日本語に翻訳する