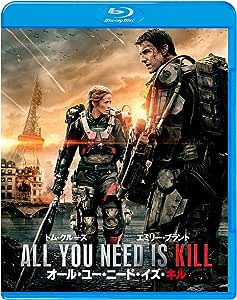 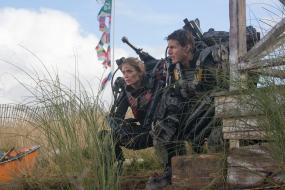 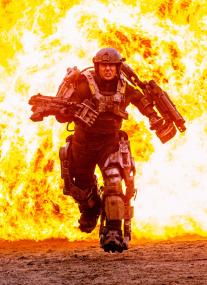 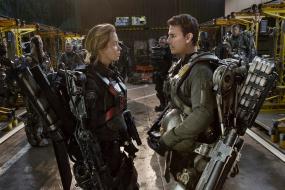 rbmusicman/and/movie-fan'
5つ星のうち4.0 'ZERO TO HERO' - 'BUT WHO WILL REMEMBER ?'
2014年10月14日に英国でレビュー済み
Amazonで購入
The Earth is under attack from an Alien race, our weaponry is no match for them.
Major William Cage (Tom Cruise) is ordered against his will to go into combatative
service and will be dropped onto the front line of defence on the French shores.
The Major can't even stomach the sight of blood, certainly not his own, the mission
he is about to embark upon is almost certainly one in which he will be killed.
Branded as a deserter and coward he's been demoted to 'private'
On the Beaches of France the Aliens totally overwhelm Earth's attack force including
unlikely combatant William Cage, however he's been thrown into a 'Time-Loop' and
arrives back on base on the evening prior to the ill-fated attack.
This happens over and over again, he cannot make his new comrades understand
that he knows what will happen next.
On the beach he'd met celebrated 'Warrior' 'Rita Vrataski' (Emily Blunt),with the knowlede
of what had happened each time around he's able to save from certain death at that moment
in time.
Each time he returns to the beach he learns a little more and develops his skills and gradually
learn how to fight back.
Because 'Rita' also has the memories of her earlier beach encounters with the Aliens,the two
begin to form an alliance, the former Major is put through his paces by 'Rita' he has many skills
to learn.
Teaching him new skills, over and over again, preparation is everything, a little knowledge
of what happens next, an advantage ???
It seems the only hope Earth has of victory may well depend upon the few.
There is some seriously enjoyable action sequences along the way as 'William' and 'Rita'
progress a little further on each re-visit.
There are also several light hearted moments that are sure to make you smile.
The film is without question an enjoyable movie experience indeed.
Great special-effects, in 3-D the action is certainly in-your-face so to speak, as the spider
like creatures are hurled toward you (great-stuff)
Great picture and sound quality throughout.
Special Features (in 2-D)
* STORMING THE BEACH - Drive into the trenches for a gritty look of creating the films
epic sci-fi batte.
* WEAPONS OF THE FUTURE - Watch Tom Cruise and Emily Blunt tackle the challenges
of strapping on exo-suits to become super soldiers.
* ON THE EDGE WITH DOUG LIMAN - Follow the passion-fueled director as he confronts
the pressure of making a futuristic war film look real.
* PLUS DELETED SCENES AND MORE
続きを読む
11人のお客様がこれが役に立ったと考えています
違反を報告
レビュー を日本語に翻訳する

wellard
5つ星のうち5.0 What a great film
2019年8月10日に英国でレビュー済み
Amazonで購入
The premise is akin to Groundhog Day, major Nash, by a twist of fate, is perpetually waking up on the same day after being killed in a war situation. He goes from bewilderment initially, catches on to what’s happening, and wisens up to what he needs to accomplish. His transformation is entertaining and Emily Blunt provides a class act as his guide/accomplice. A big, gaping hole in the plot at the end still, nevertheless, provides great entertainment.
続きを読む
1人のお客様がこれが役に立ったと考えています
違反を報告
レビュー を日本語に翻訳する

Night
5つ星のうち5.0 Good film!
2014年10月30日に英国でレビュー済み
Amazonで購入
Edge of Tomorrow seemed to slip under the radar for a lot of people, so if you missed it you missed a thoroughly enjoyable action film. It's also one of the minority of films I'd recommend in 3D, the effects are really impressive throughout.
I won't go into detail on the story as it'll spoil it but it involves aliens, guns, time travel, mechanised power suits and (for me personally) a surprisingly solid plot with very few holes.
Cruise is more or less his usual self although there's a fair amount of progression in his character and Emily Blunt is properly badass. There's also a decent number of properly funny (and very painful) gags throughout. In summary this is a classic moderately intelligent action film.
続きを読む
3人のお客様がこれが役に立ったと考えています
違反を報告
レビュー を日本語に翻訳する

Phil Harrison
5つ星のうち5.0 A great film.
2018年4月24日に英国でレビュー済み
Amazonで購入
Yes it's a great film, especially if Groundhog Day is one pf your favourite movies.
I dunno, it's just something about re-living the same day, over and over again, that really intrigues me, cos isn't that what we are all doing?
続きを読む
違反を報告
レビュー を日本語に翻訳する
すべてのレビューを参照します
Amazonプライム会員ならお急ぎ便、日時指定便が使い放題
さらに、映画もTV番組も見放題。200万曲が聴き放題 。クラウドに好きなだけ写真も保存可能。
> プライムを無料で試す