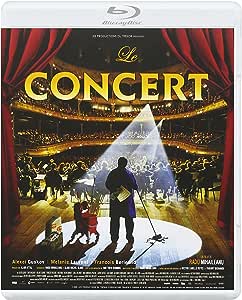 J. McDonald
5つ星のうち5.0 The Concert.
2017年11月27日に英国でレビュー済み
Amazonで購入
This is a great little French-produced comedy-drama, though most of the spoken dialogue throughout is in Russian.

It does require a suspension of disbelief for most of the proceedings, but it tells the tale of a talented conductor fired and disgraced under the communist regime who years later, gets the opportunity to assemble other former Bolshoi musicians in the same situation to impersonate the real orchestra on a concert trip to Paris; the premise is absurd, but the nature of the film is such that it sweeps the viewer in despite the improbabilities. There are other, more serious aspects to the tale which have some emotional impact, but it is - on the whole - a feel-good, uplifting film with some beautiful music at it`s heart, courtesy of Tchaikovsky.

A hugely enjoyable and recommendable film; the UK DVD release has English subtitles, but you may – as I did - have to adjust your TV screen to view them properly. The only extras on the disc are a trailer and a 13 minute interview with director Radu Mihaileanu.
続きを読む
5人のお客様がこれが役に立ったと考えています
違反を報告
レビュー を日本語に翻訳する

Jack Renouf
5つ星のうち5.0 Wonderful piece of film making
2011年2月18日に英国でレビュー済み
Amazonで購入
This was one of the best DVDs I have seen for some time. The sheer vitality of the acting was breathtaking. The music was invigorating and the settings were beautifully presented. I loved the comedic elements, especially the communist dinosaur and the penny pinching French producers. The realisation of the Moscow underworld was brilliant as was the capacity of the outcast musicians to rise above their misfortune through the power and passion of the music. I could attempt some sort of socio-historical commentary but this was a story of triumph out of adversity and I enjoyed it purely on that level and, of course, the Tchaikovsky violin concerto was sublime. The fact that it wasn't in Blu-ray didn't matter as the sound was so good and my PS3 player upscaled it beautifully. Dim the lights, ramp up the volume and enjoy!
続きを読む
61人のお客様がこれが役に立ったと考えています
違反を報告
レビュー を日本語に翻訳する

Atlanta
5つ星のうち5.0 Abandon judgement, surrender to the sound
2021年2月8日に英国でレビュー済み
Amazonで購入
Just let the improbability of the narrative pass you by, & this film will reward you amply. It's about a conductor who's denounced as an enemy of the people, because he refuses to kick Jews out of his orchestra. Disgraced, he nevertheless finds a way to reassemble his orchestra & transport it to Paris, to give a Tschaikovsky concert.

JohnHoppy
5つ星のうち5.0 Tchaikovsky Lives !
2012年10月19日に英国でレビュー済み
Amazonで購入
It's probably a good thing for Hollywood that so many European films present a language problem. If not, films like "Le Concert" would be walking off with all the awards.
In terms of pure enjoyment, I got more out of this movie than most of the top-running Oscar contenders over the past few years. That's the spirit this film embraces - Joy. A quality Frank Capra could have told us something about. Not that "Le Concert" could be called Capra-esque, although watching it I did at times get a flavour of the Ealing comedies, brought up to date and translated into Russian and French. It's true that watching a foreign-language film via subtitles takes away a little of the intimacy of the original dialogue, but it's usually better than having some god-awful American voices overdub the actors with atrociously inept translations and substituted American names or phrases that have spoiled so many good European films on DVD (see, e.g. Shirley Valentine). So despite the subtitles, I probably got as much out of the film as I could have. Fleshed out with characters that are deftly ripped from life and lovingly enlarged, and with a crackling screenplay backed by a scintillating music score, "Le Concert" absorbed me from the beginning, made me chuckle in parts and, despite the fairy-tale nature of the denouement, made me want to clap exuberantly by the end, which brings a surprise I didn't expect. It's a class piece of work by a distinguished ensemble. Enjoyment - I keep repeating it, it's what most of us used to go to the cinema for, and if you cannot believe in so many of today's poorly-crafted specimens dominated by hollow special effects, believe in dreams like this one. Enchanting. Tchaikovsky - I hear his faint applause from afar.
続きを読む
1人のお客様がこれが役に立ったと考えています
違反を報告
レビュー を日本語に翻訳する

J. Kibble
5つ星のうち5.0 The Concert
2011年4月29日に英国でレビュー済み
Amazonで購入
This is an absolute gem of a film that can be viewed at several levels. There is a serious political point to the film and it can make you laugh and cry by turns. The music is exquisite from the brief regference to Mozart Piano Concerto 21 to the wonderful rendition of the Tchaikovsky Violin Concerto. There are absolute acting gems in principal and minor roles and you are willing everything to work out for them all. It is a sort of 'Amelie' film but with a much stronger story line based in Russian historical reality . Like me you will probably watch this film many times and always find something fresh. A treat buy it for yourselves and all your friends !
続きを読む
13人のお客様がこれが役に立ったと考えています
違反を報告
レビュー を日本語に翻訳する
すべてのレビューを参照します
Amazonプライム会員ならお急ぎ便、日時指定便が使い放題
さらに、映画もTV番組も見放題。200万曲が聴き放題 。クラウドに好きなだけ写真も保存可能。
> プライムを無料で試す