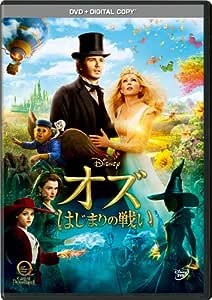 gemini66
5つ星のうち5.0 Wizard of OZ
2019年7月26日に日本でレビュー済み
Amazonで購入
Very entertaining! As this is my first time to watch The Wizard of Oz, I was just wondering if it is the real version. Anyways, it is fun to watch, and the story is great. Thanks, Prime.
続きを読む
役に立った
コメント 違反を報告
レビュー を日本語に翻訳する

Anime Brighton
5つ星のうち5.0 Great in all areas, could be acted a little better
2020年3月15日に英国でレビュー済み
Amazonで購入
A really great film and one of the better Disney live action movies. The 3d is used really well and special effects are great. As you would expect from Disney the production value is really high class. The only downside is that some of the acting is over the top to the point of being unbelievable. But the villain characters are really well played and hit just the right balance of over the top and believability. A fan of Oz or Disney or family movies will live this one.
続きを読む
違反を報告
レビュー を日本語に翻訳する

customer
5つ星のうち5.0 Magical fairy tale for kids and grown ups
2020年1月28日に英国でレビュー済み
Amazonで購入
A great cast playing well written characters with dazzling effects and a simple yet entertaining storyline. James Franco brilliant as always, playing a magician conman forced to put his tricks to the test.
It was a very pleasant surprise, both story- and production-wise. 3D is the only way I imagine unlocking the movies full wonder.
Somehow this title totally escaped us at the time of its release.
Oh yeah, I'm sure kids will love it too 😝

nemo man
5つ星のうち4.0 a good film but not for young users
2013年7月7日に英国でレビュー済み
Amazonで購入
after missing this film in the Cinema, I ignored online reviews pre-ordered the 3d disk version (ps not lot of 3d in there but when it comes it pops off the screen better than some for 3d) for anyone who who likes watching Oz films in the past may find this reboot a little hard to watch and straight away I will say this is NOT a film you would want to show your under 9s as in subject matter in a way its more aimed at young adults (eg 11/12) who can grasp the subject of a broken heart,what a conman is/illusionist, can handle sudden & frightening close ups of screaming baboon faces, and whilst done in a light hearted way there's even a quick brush (if its ever possible) on the subject of genocide, but I must stress for the unenlightened it may just look like a lot of broken pottery, its for these reasons alone I would hesitate against showing to young children and in some ways it really should have a 12 rating.

in a way you could think of this as a successful blend of once upon a time and return to Oz, than the original OZ whist light and airy use of technicolor sets and with the costumes to fit, below the surface is a much darker story, and to be honest if they had gone for a more adult audience instead of PG it could have been a better film all over because after watching the film again in a way it kind or makes you think the script writers may have spent a couple of hours looking at "alice: the madness returns" for inspiration then brushed over most of it again in the edits.

As for the film however it first starts off like all oz films in Kansas (PS good old 4/3 ratio in sudo B/W, so please tell your younger views not to try adjusting your tv set) following the story of one washed up carnie illusionist Oz, who seems to be a bigger hit with the ladies than the crowds, enter his side kick (painfully miss cast) zach braff complaining about the poor takings (plus brushing on the subject of Oz being a bit of a Lothario)

queue escaping from one of OZ's past conquests partners & Oz jumps into a helium Balloon and so starts the trip off to Oz. I will not give to much away away other than to say we shall finally meet the three witches before there first outing in OZ, (wicked this isn't) Theodora (mila kunis) Evanora (Rachel weisz) and Glinda (Michelle Williams - (who hands down plays the best acted roll in the film.) its at this point the film comes alive yet also leaves you feeling it could have been something a bit more.

I would recommend this to any fantasy fiction fan who is looking for there fantasy fix, however because of the PG raiting some parts and lines had to be dummed down and because of it (either though being miss cast) or having to get past the sensor-board, things take on this hybrid bad guy feeling, believe me this is not one of Rachel Weisz finest moments, (yes I see a golden raspberries) you just don't get the feeling there's more to this character when in fact the story is crying out for a manipulative "Regina"

ardamiactadh
5つ星のうち5.0 Mind-blowing 3D
2017年2月19日に英国でレビュー済み
Amazonで購入
This is a storyline that really gets you thinking, a lot more thoughtful than the original Wizard of Oz but links seamlessly as a prequel. The 3D sequence when they're flying in bubbles has to be seen to be believed - amazing! Of course there's also the 3D tornado which will have you flinching.
続きを読む
2人のお客様がこれが役に立ったと考えています
違反を報告
レビュー を日本語に翻訳する

J
5つ星のうち5.0 Enjoyable couple of hours
2017年1月1日に英国でレビュー済み
Amazonで購入
Enjoyable and in places visually stunning. Watched it with daughters of 8 and 4 in 2d, the younger one being crazy about the wizard of oz. No really scary stuff. Youngest lost interest a bit. Eldest didn't get some of it with regards th the wizard's philandering and asked lots of questions, but she enjoyed it overall. Storyline reminiscent of Maleficent. I watched bits of it in 3D later. There are a few good 3D segments.
続きを読む
1人のお客様がこれが役に立ったと考えています
違反を報告
レビュー を日本語に翻訳する
すべてのレビューを参照します
Amazonプライム会員ならお急ぎ便、日時指定便が使い放題
さらに、映画もTV番組も見放題。200万曲が聴き放題 。クラウドに好きなだけ写真も保存可能。
> プライムを無料で試す