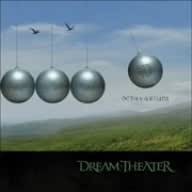 Pedro Quaresma
5つ星のうち5.0 A great intro to Dream Theater
2019年6月11日に英国でレビュー済み
Amazonで購入
A bit of everything on Dream Theater's repertoire, from the prog metal songs (Root of all evil, Panic Attack), to the slower ballads that fit LaBrie's voice quite well (The answer lies within, I walk beside you). The 24m Epic "Octavarium" is outstanding both lyrically and musically.
One of the greatest (prog) albums of this century.
続きを読む
違反を報告
レビュー を日本語に翻訳する

Garry Richards
5つ星のうち5.0 A masterpiece in more ways than one
2005年8月14日に英国でレビュー済み
Amazonで購入
Dream Theater are a band that have changed hugely over the last 10 years. The prog veterans have moved away from their seemingly inaccessible cryptic songs and have now developed a much more pronounced and memorable style. Where as "Images and Words" requires thorough listening to appreciate fully "Octavarium" grabs you from the first track and refuses to let go.
DT are a band of many faces - Petrucci, Portnoy and others can adapt themselves to almost any style of rock. Some fans sing the praises of the slower, haunting ballads while others lean towards the epic, heavy songs that punctuate almost every album. After "Train of Thought" showed the darker side of Dream Theater "Octavarium" has included something to please everyone. The opener "The Root of All Evil" sets the tone in a distinctly heavy manner but is followed by the soothing "The Answer Lies Within" - within the first two tracks the opposites of Dream Theater are expertly drawn out.
The album continues in a similar vein. Each track adopts a new vision. "Panic Attack" assaults you from the go and doesn't slow down, if anything it speeds up. "Never Enough" could practically be straight out of Muse album, but obviously, that isn't a bad thing. "I Walk Beside You", however, sounds far too radio-ready. It's catchy chorus and accessible riffs don't do the album any favours, even if it reasonably well composed.
In "Sacrificed Sons" Dream Theater continue the theme of religious fanaticism that they touched on in their previous album. At times it's haunting, poignant, but it is cleanly transformed into an instrumental firework show that doesn't feel out of place or forced. The epic orchestra melodies bursting through the guitars are surprising and ultimately welcome. One of the strongest tracks.
But of course the reason many will buy this album, Dream Theater zealot or not, is the 24-minute long epic "Octavarium". It has completely everything you could want from a Dream Theater track, it's slow start builds into a huge finale that could just about be one of the best pieces of music you've ever heard. It even has instrumental areas that are reminiscent of Dream Theater's earlier work - the quirky guitar effects hark back to 92's "Images and Words". You could easily listen to this track repeatedly and each time find something new to appreciate, it's a masterpiece in song writing and performing.
Like I mentioned, this is a far more accessible album than many Dream Theater fans are used too. But that is by no means a bad thing, there truly is something for everyone. I was quite surprised to find that Mike Portnoy's drumming seems quietly laid back this time around though. While it remains to be as flawless as ever is misses some of it's complex inventiveness of his previous work. As a drummer myself I find it doesn't have the "wow" factor that he is usually associated with. It's just not as daring.
If you're a DT fan you've probably made up your mind to buy this album already; if not (and if you even remotely like rock) you should pick this up immediately. It's addictive stuff, and should go down as one of Dream Theater's finest.
続きを読む
3人のお客様がこれが役に立ったと考えています
違反を報告
レビュー を日本語に翻訳する

Baldman
5つ星のうち5.0 my first DT studio album proper
2010年4月8日に英国でレビュー済み
Amazonで購入
I have all the live albums and was mightily impressed that they could release so many quality live albums across their career. The quality of the musicianship was mind blowing. Also got the greatest hit album, and was equally impressed with the breadth and scope of their studio output. So when I saw this for pocket money, I couldn't resist. What a fantastic album, anthemic and epic, but what's this, a DT song less than 5 minutes! "I Walk Beside You" is a perfect little song and the perfect introduction to DT. Ignore the Prog-metal label, this is just solid heavy rock music with a brain and a conscience. Much is made of the virtuosity of the individual members, but their strength comes when they are playing together as a group. DT haven't really crossed over outside the "classic rock" fraternity. Listening to this album I can't understand why they are not as well known as Rush or Iron Maiden,( not that they are reference points). Buy this and get in on the secret that is DT. A casual rock fan will become a convert I guarantee it.
続きを読む
違反を報告
レビュー を日本語に翻訳する

A. J. Rabet
5つ星のうち4.0 Eighth Wonder
2007年6月7日に英国でレビュー済み
Amazonで購入
Okay some of the lyrics on this album are a bit immature and rather pretentious in a sixth form schoolboy way but we are talking about musicians here not the poet laureate. If we looked at any lyrics be they from Yes to Paul Weller to the Beatles to the Rolling Stones we would find some dubious rhymes and a whole load of tosh.

The music is rather good and well worth listening especially the powerhouse drumming of Mike Portnoy but damn it all the musicians are of a high calibre.