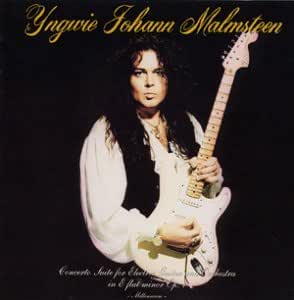 Japanese Release featuring Two Month Earlier Release Date Than Other Territories. Malmsteen Collaborates with the Czech Philharmonic Orchestra Covering Classical Music which Has Inspired his Career as a Musician.

Japanese Release featuring Two Month Earlier Release Date Than Other Territories. Malmsteen Collaborates with the Czech Philharmonic Orchestra Covering Classical Music which Has Inspired his Career as a Musician.

Matthew Schwarz
5つ星のうち4.0 Classical sounding concerto with electric guitar
2018年3月27日にアメリカ合衆国でレビュー済み
Amazonで購入
Since the Moody Blues "Days of Futures Past" and Deep Purple's "Concerto For Group And Orchestra," there have been a number of rock/classical crossovers. What makes this one different is that it is largely a common-period classical piece of music with electric guitar (and some classical guitar) as soloist. Most of these type things are rock with orchestral backing, or a mix of rock and classical - often bringing in some jazz or "20th Century classical" music. Malmsteen, here, sticks to a Vivaldi/Mozart traditional classical feel, and (unlike contemporary classical composers) uses the guitar in a pretty traditional classically-influenced way that sounds good and blends nicely with the orchestra. While he's not going to go down as one of the "great" composers, his music is nonetheless pretty good and tuneful. And, of course, his chops are phenomenal.

While not exactly avant-garde and groundbreaking, Malmsteen's conservative mix of metal and centuries-old classical traditions is exactly what I've been wanting to hear for quite sometime. Sometimes, it's better to do the "obvious"! The only comparable music I've heard is some of Uli Roth's work, although I don't know if he's written a whole album of new, original music for just electric guitar and orchestra. (At least, he hasn't recorded any that I know of, although his "Metamorphosis" - Vivaldi's Four Seasons performed for electric guitar and orchestra, with some additional variations - is similar).

If the idea of electric guitar with orchestra is something you think you'd like, this is highly recommended.
続きを読む
1人のお客様がこれが役に立ったと考えています
違反を報告
レビュー を日本語に翻訳する

BigTwinRider1964
5つ星のうち3.0 Another crap audio quality Malmsteen recording.
2020年5月25日にアメリカ合衆国でレビュー済み
Amazonで購入
Great music and arrangements, BUT the quality of the recording is HORRIBLE. EVERYTHING sounds veiled. Glaring mids, weak bass, muffled treble. Unfortunately all too common on Malmsteen recordings. Sad, because I love his guitar work, as well as symphonic music, and this recording is almost too painful to listen to.
I dont blame the seller. I blame Malmsteen.
5 stars for the performance, 0 stars for the recording quality. Averaging 2.5 stars
続きを読む
違反を報告
レビュー を日本語に翻訳する