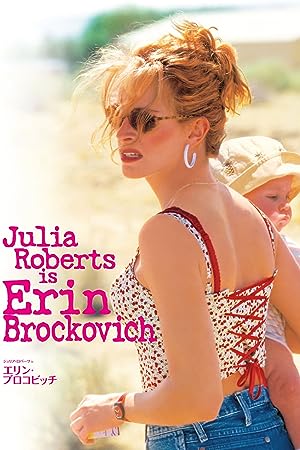 Spike Owen
5つ星のうち4.0 For the first time in my life, I got people respecting me. Please, don't ask me to give it up.
2015年7月25日に英国でレビュー済み
Amazonで購入
The film is based on a real case and is about real people so to that ends it is obviously simple in structure, and nagging away as you watch it is the fact that the ending is never in doubt, it "is" all too predictable. However, what made Erin Brockovich the success it was is that the title character is not only interesting but also, importantly, intriguing. A foul mouthed hard bitten, twice divorced mother of three has to fight her corner just to get an honest days pay. It's a fabulous story backed up by a simply incredible performance from Julia Roberts. Here Roberts has let her hair down, puts on a push up bra and a short skirt, she is clearly enjoying the freedom of the role, and the results are real effective.

I have no doubt that working alongside Albert Finney helped Roberts no ends, but it is her show all the way, and she alone masks over what really is an ordinary film, there is nothing we haven't seen before here, it's just a more modern take on the good versus evil corporate company scenario. It's steadily directed by Steven Soderbergh, emotional scenes are not overstretched to treacle point, and all in all it's good solid story telling. Repeat viewings prove to dilute the uplift factor of the finale, but Roberts' performance certainly holds firm for evermore.

8/10 for the film, 10/10 for Roberts' ballsy show. If only we could have had more of these performances from her.
続きを読む
7人のお客様がこれが役に立ったと考えています
違反を報告
レビュー を日本語に翻訳する

LeSinge
5つ星のうち5.0 Love this film
2019年10月14日に英国でレビュー済み
Amazonで購入
This is a terrific film mainly for the relationship between Erin and her boss played by Albert Finney but Julia Roberts is outstanding . That it is based on a true story makes it even better and the real Erin Brockovich has a Hitchcock style appearance in the film early on as ... well I won't spoil it if you haven't yet seen this excellent film. Incidentally I cannot agree that Harley Davidson is the best motorcycle in the World as he seems to be working on it all the time. I prefer my 'bike to go when I need it to.
続きを読む
違反を報告
レビュー を日本語に翻訳する

Helen
5つ星のうち4.0 Based on true story. Splendid retelling
2020年5月19日に英国でレビュー済み
Amazonで購入
The only reason I don't give it 5 stars is I felt Julia Roberts acted the young protagonist showing a bit too much feisty impatience now and again - it was a bit wearing! Other than that, Julia is one of my favourite actresses and always worth seeing her movies.

But the true story issue is dramatic and well worth knowing about - clearly a huge scandal at the time. That was our No.1 reason for watching the movie. Well done by all the cast to put it over so well.
続きを読む
違反を報告
レビュー を日本語に翻訳する

paul johnson
5つ星のうち5.0 A great film based on a shocking real life case
2017年10月2日に英国でレビュー済み
Amazonで購入
This is a fantastic telling of a case in America where the actions of a company were having devastating results for people in the local area. Julia Roberts is outstanding with her portrayal of Erin Brochovich. This film is well worth a watch and would not be lost in any movie collection
続きを読む
2人のお客様がこれが役に立ったと考えています
違反を報告
レビュー を日本語に翻訳する

Book Maniac
5つ星のうち5.0 An admirable woman
2020年7月28日に英国でレビュー済み
Amazonで購入
As this is the true story of Erin Brockovich it makes the film more interesting, for me. The way an ordinary woman took on the big guys and won is impressive. Really enjoyed this film and will watch it again.
続きを読む
違反を報告
レビュー を日本語に翻訳する
すべてのレビューを参照します
トップへ戻る
Amazonについて
Amazonでビジネス
Amazonでのお支払い
ヘルプ＆ガイド
日本語ショッピングのための言語を選択します。 日本ショッピングのための国/地域を選択します。
© 1996-2020, Amazon.com, Inc. or its affiliates