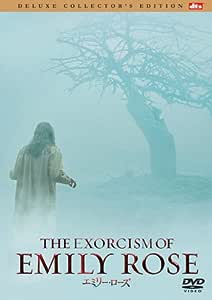 Mr. Stephen Kennedy
5つ星のうち4.0 Intriguing mix of Court Room and chiller
2008年6月20日に英国でレビュー済み
Amazonで購入
With such a recent plethora of movies based on torture and gore to achieve their chills, it is refreshing to find a movie that retains some intelligence and still manages to get a few spine-chilling moments, with barely a speck of blood or guts to be seen.
First and foremost, this is a court room drama. And yet there is an interesting twist, because the subject is one based on belief, not on facts.. and it makes for some interesting moral questions. The movie starts at the tail end of events as the priest is taken into custody. A young woman, Emily Rose, has died in his care following an exorcism. Was it neglect on his part keeping her from medical care for a psychotic epilepsy condition, or were his efforts justified and in fact medical intervention nullified the effects of the exorcism? We are led through the events in flashback throughout the course of the trial, sometimes to eery effect, as the priest refuses to cut a deal and insists on telling Emily's story to a jury.
At the centre of the movie is the relationship between Laura Linney's jaded and agnostic defence counsel and her client the priest played by Tom Wilkinson. The two leads play with conviction, but Jennifer Carpenter's physically demanding role of Emily Rose should not be overlooked.
Admirably, the tone is not one of full on shocks and scares - there is a neutrality which gives you space to make your own mind up, and yet allow you to see events as the Father Moore and Emily saw them. It's this intelligence towards the subject which sets this apart from most other recent horror movies and makes this worth watching.
続きを読む
16人のお客様がこれが役に立ったと考えています
違反を報告
レビュー を日本語に翻訳する

Paul Nevin
5つ星のうち5.0 Be prepared to be haunted!
2015年1月27日に英国でレビュー済み
Amazonで購入
the fact its based on true story, not exactly accurate in term of everything but if you look up Anneliese Michel - its mind-blowing.

Be warned, if you watch it, you will be haunted for days after. even if you've watch it b4. that is exactly why i brought this dvd LOL cos i love being haunted and have sleepless nights afterward.

One of best films on Exorcism. Not many exorcism films is as good as this film except The Exorcist.
続きを読む
4人のお客様がこれが役に立ったと考えています
違反を報告
レビュー を日本語に翻訳する

coached88
5つ星のうち5.0 Measure of an exorcism by Davidinator
2012年8月1日に英国でレビュー済み
Amazonで購入
Yes I have seen this before and I loved it as its a horror/thriller and a courtroom drama in one !!The story of how Emily became possessed is fascinating as its in bits of pieces told in the courtroom so the audience is left in the dark throughout the film . The x examination of the priest was great fun as there was so much passion by the DA (think played by Scott Campbell which is great for refining your arguing skills in life and bashing the Roman Catholic socialist church loon . Great acting from all involved , great atmosphere , story and buy this !!
続きを読む
2人のお客様がこれが役に立ったと考えています
違反を報告
レビュー を日本語に翻訳する

Tony_Wales
5つ星のうち5.0 Scary Night Fright
2014年10月30日に英国でレビュー済み
Amazonで購入
A film that has personally registered with myself and several friends. This was purchased as a replacement for a friend who had only the original short copy. A rather scary outing but one that does not capitalise on blood and gore. Scary on first viewing but does not pale with repeated viewing. I still find myself waking wevery night at 3.00 am!!!!
続きを読む
2人のお客様がこれが役に立ったと考えています
違反を報告
レビュー を日本語に翻訳する

jack bindin
5つ星のうち4.0 Good, A different/more interesting sort of horror film
2014年2月28日に英国でレビュー済み
Amazonで購入
I think the way they made this film was very good. When I was about to watch it the first time, I thought 'oh no.. just another exorcism film'... But it ended up being really good and I couldn't take my eyes off it. This film is mostly done through the court view, and then will show a flash back of an incident that happened to Emily. The defence lawyer and the 'people's' lawyer then explain the incident from their point of view. the people's lawyer believes that the case is medical, whereas the defences lawyer believes it is demonic.

Throughout the film you start to get more and more glued to the screen, and (with it being a true story) you really want to know the outcome.

Other than that, I think the film was quite scary (although, I've seen scarier). That's why I've gave it 4 stars instead of 5, it is scary, but, again, it's not the scariest I've ever seen. But it is definitely worth the watch! absolutely glued
続きを読む
2人のお客様がこれが役に立ったと考えています
違反を報告
レビュー を日本語に翻訳する
すべてのレビューを参照します
Amazonプライム会員ならお急ぎ便、日時指定便が使い放題
さらに、映画もTV番組も見放題。200万曲が聴き放題 。クラウドに好きなだけ写真も保存可能。
> プライムを無料で試す