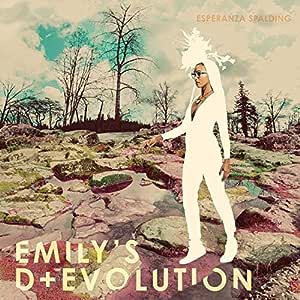 The Captain
5つ星のうち5.0 Top Quality Modern Jazz
2016年3月4日に英国でレビュー済み
Amazonで購入
If you're already acquainted with Esperanza Spalding's previous works, you can rest assured that Emily's D+Evolution is something of a masterpiece. The instrumentation, the lyrics, the singing - Esperanza doesn't spare the horses where creativity is concerned.

If you're new to Esperanza Spalding, this album is not a bad one as an introduction, though I would recommend her entire catalogue of releases if good quality, well produced music is your thing.

Emily's D+Evolution is slightly more radio friendly than her previous releases, but it's still several worlds away from the cheap, nasty pop music being released of late. With lyrics reflecting the state of the world in these turbulent times, and instruments playing melodies and riffs that seemingly enforce the message of love and peace, this album truly is something to treasure. My copy arrived today and I listened to it five times on different stereo systems before writing this review. Absolute top quality recording - the bass is thumping, the treble is crisp and the mid is warm and rich.

To see Esperanza live, however, is the best way to appreciate her genius, so, if you have not heard of her before you should check out some of her live performances on YouTube, after which you'll most likely return here to purchase her albums. Do start with this one 😃
続きを読む
25人のお客様がこれが役に立ったと考えています
違反を報告
レビュー を日本語に翻訳する

Mr. Thomas Graham
5つ星のうち5.0 Esperanza does a Ziggy Stardust
2016年11月4日に英国でレビュー済み
Amazonで購入
Who is Emily anyway? She’s still a bit jazzy on the surface but with a formidable rock foundation so she’s moved on a bit from Esperanza. She’s certainly done her homework on this album with a bit of King Crimson, a sprinkle of Weather Report, Joni Mitchell and perhaps even a little Elkie Brooks (Change us) in evidence but it has to be said there is no plagiarism at all, it’s just that she clearly has her influences and her heroes and likes to pay homage to them. For me that’s what defines Emily.

If you’re going to buy this album then make it the deluxe version which has a great extended version of “Unconditional love” and an additional track “Change us”. And so to the music which is still very jazzy highlighting her ability to improvise and a natural gift for melody. “Judas” and “Noble nobles” are exquisite examples of this. However there is a lot more kerranging going on throughout with “Funk the fear and the extended version of “Unconditional Love” showcasing Matthew Steven’s very Fripp-like guitar, perhaps Fripp gave him lessons, he does that sort of thing.

“Change us” and “One” are companion pieces in a way, both are rock based songs that start off innocently enough but with absolutely humongous choruses that would pin you to the wall if you weren’t holding onto something substantial. Weird 60’s style flat harmonies offsetting Esperanza’s warm melodic delivery are used in “Elevate or Operate”. “Ebony and Ivy” is reminiscent of Velvet Underground using narration as a backdrop for a strong melody and quirky lyrics. I could justifiably go through each track individually but that is something I might do as an edit in the future however in the meantime I will summarize by saying that nearly all the songs on this album are absolute belters!

Overall the album has its quirks and oddities to keep you on your toes, however the compositions are strong with structure and melody in abundance, all held together with a playful childlike attitude in many songs. The only one I’m struggling with is “Rest in Pleasure” which hangs together a bit awkwardly for me and has a sort of unfinished quality about it nonetheless others might think it’s the highpoint of the album for them. I might even get round to thinking that myself on further listening. The songs are lyrically challenging with “Earth to Heaven” making a powerful statement with the rest certainly giving food for thought if you have the time.

So, even with the minor flaws that stop this album being an absolute masterpiece I’ll content myself with considering it just a masterpiece. Five stars no doubt.
続きを読む
1人のお客様がこれが役に立ったと考えています
違反を報告
レビュー を日本語に翻訳する

plaid
5つ星のうち5.0 A challenging, soulfull and nearly perfect album
2016年4月25日に英国でレビュー済み
Amazonで購入
I happened upon Esperanza on youtube (Live at BRIC) which is a live performance of D+Evolution. I was blown away by the virtuoso fretless bass playing and the theatricality of the show and immediately picked up a copy of the album.

The album starts with Good Lava: overdrive guitar, staccato bass and challenging backing vocals.
Unconditional Love is one of the more standard song with a great chorus.
Judas is a little more experimental with a great walking bassline and a slightly unorthodox song structure.
Earth to Heaven could have been on any one of Joni Mitchel's mid-career output. In fact, the more I listen to the album, the more reminded I am of Joni.
One: the lead single from the album is a truly amazing production. The bass is stunning; again the backing vocals are so important to her sound. Her lead vocals are soulful. Guitar and drums are solid but let the vocals and bass enjoy the limelight.
Rest In Pleasure: initially doesn't stray too far from the template of the previous songs. Solid verse and transcendent chorus with more great backing vocals. Then the song strays from standard verse/ chorus and takes you through a number of unexpected changes before returning to the fab chorus.
Ebony and Ivy: darker than previous song which is a nice change of pace.
Noble Nobles: again I hear Joni on this piece which is the pick of album. Vocals are sensual and the bass puts me in mind of Jaco. Another song that clocks in at well under 4 minutes.
Farewell Dolly is a short preamble to the following track.
Elevate Or Operate: starts like a nursery rhyme that quickly escalates to a piano driven prog-like piece. Loads of chord changes but it's less musical than most of the album.
Funk the Fear: as with the last song, I think this is slightly sub-par compared with the rest of the album.
I want it now: take it or leave it..

While the album looses focus at around track 9, this is still a great album. Highly recommended for anyone who likes funk or jazz or even Prog!
続きを読む
1人のお客様がこれが役に立ったと考えています
違反を報告
レビュー を日本語に翻訳する

iGlad
5つ星のうち5.0 She's Produced a Real Gem
2016年11月28日に英国でレビュー済み
Amazonで購入
I saw her perform this album at the Love Supreme Jazz Festival in July. For many it was hard watch to watch for many as they just didn't get it. However I listened to the music and I got that. The album is a gem of Jazz and funk with some Joni Mitchell thrown into the mix. Miss Spalding does remind me so much of Mitchell on certain tracks. The vocals are just so right and the musicianship is spot on. It's hard to pick a favourite track but 'Earth to Heaven' is a stand out for me. All I can say is buy this album as it's an intelligent well made album that will delight the senses.
続きを読む

5つ星のうち5.0 She's Produced a Real Gem
2016年11月28日に英国でレビュー済み
I saw her perform this album at the Love Supreme Jazz Festival in July. For many it was hard watch to watch for many as they just didn't get it. However I listened to the music and I got that. The album is a gem of Jazz and funk with some Joni Mitchell thrown into the mix. Miss Spalding does remind me so much of Mitchell on certain tracks. The vocals are just so right and the musicianship is spot on. It's hard to pick a favourite track but 'Earth to Heaven' is a stand out for me. All I can say is buy this album as it's an intelligent well made album that will delight the senses.
このレビューの画像