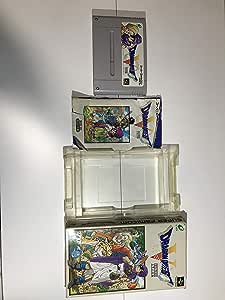 Will D.
5つ星のうち5.0 Casino, Monster recruiting, lots of good turn-based entertainment here!
2018年2月27日にアメリカ合衆国でレビュー済み
Amazonで購入
This is the USA-known series called Dragon Warrior.
This is the 5th installment in the series, the first four were on 8-bit NES in the states (and 1~3 also saw re-release on the Super Famicom in Japan).

This isn't physically compatible with the North-American SNES - You will either need to modify the SNES itself (remove two plastic tabs in the back bottom of the unit's cartridge slot, that lock-out non-US games), or use an adapter (or use a game genie and take the plastic casing back off of the game genie, that will work, make sure the game is plugged in label-forward though). An adapter or an SD-card adapter (Like the Super UFO Pro, or SD2SNES) will work and do the trick without needing to modify your SNES control deck any.
De-Jap makes a great translation patch for this game (you can either patch it in memory at runtime with the Super UFO Pro, while still saving to the cart, or you can patch it manually and load the image up on a card and run it there). There were few spelling/text errors I could catch.

Remember the Dragon Warrior 4 CASINO? IT'S BACK!!! You won't have to play all the way through this game to get to it, either.
I *LOVED* Dragon Warrior 2, 3, and 4 on the 8-bit NES. I don't know why Enix never brought 5 & 6 to the USA SNES. I sure wish they would have.
You can capture monsters now, starting about 20% of the way through the game. It's really awesome, they level-up too, and can be specifically commanded if they have an intelligence (wisdom) of 20 or better. I believe you can recruit up to 8 monsters at a time, and ones you no longer need can be 'stored' at a specific store. You can also find another store, a depository, that will hold your gold or valuables if you have too many.
While not entirely as streamlined as the USA Final Fantasy 3, it's extremely entertaining, and none of the folks who loved NES Dragon warrior 2~4 will be disappointed in any way. In fact, it's so similar to Dragon Warrior 3 and 4 on the NES, I didn't have much of a learning curve.

If you love old-school RPG's, and you have a Super NES or Super Famicom, please pick this up, it's a hidden gem in the rough. While it's not going to ever top Final Fantasy 3, it's surely going to give you your RPG fix for quite a while. At the rate I am going (I tend to grind for levels so as not to die as often in harder dungeons or battles), It would take me 30~45 hours to finish the game, at the current pace.

The music/sound and graphics are all sufficient. Nothing breath-taking, just a nice upgrade from the 8-bit NES, without being distracting.

So, do definitely give this a shot. It's Dragon Warrior, and whose to complain about this?