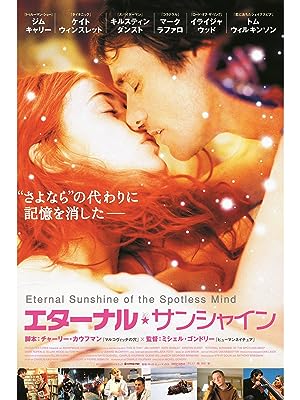 E13
5つ星のうち5.0 Carrey's best film?
2020年5月15日に英国でレビュー済み
Amazonで購入
I think Jim Carrey is a huge talent. His comedy roles are generally superb and I don't think that many of them could have been performed better by any other comedy actor, so when I say that I think this "straight?" role could be his finest work, it shows how much I rate this performance. I've watched this maybe half a dozen times since it's release and it still holds up as a tremendously enjoyable film. Kate Winslet is also superb and their screen chemistry is very convincing. Great story and visually clever it manages to be both thought provoking and emotional while remaining entertaining. By the end of the film you feel you have been treated like an adult and the film has a certain lightness of touch which really works for this story. Highly recommended.
続きを読む
2人のお客様がこれが役に立ったと考えています
違反を報告
レビュー を日本語に翻訳する

Matt
5つ星のうち5.0 Perfect combination of entertaining and emotional
2016年6月20日に英国でレビュー済み
Amazonで購入
This is one of my favorite films ever. I don't usually like romance films, but this one is something else. The plot can be a little hard to follow at first, but it is absorbing throughout, and the complex story-line just makes it more interesting each subsequent time you watch it, as you pick up little details you didn't the first time!

Great performances from every member of the all-star cast. Especially good performance from Carrey, who is surprisingly serious through most of the film, but he does have some of his typical silly moments in parts, and this balance works really well - it makes the film both entertaining and emotional, and I find that this film gets that balance perfect. The soundtrack is beautiful as well.
続きを読む
6人のお客様がこれが役に立ったと考えています
違反を報告
レビュー を日本語に翻訳する

Rupert Harvey
5つ星のうち5.0 Eternal pleasure
2007年11月5日に英国でレビュー済み
Amazonで購入
Screenwriter Charlie Kaufman's better-received Being John Malkovich was an amusing but cold oddity; director Michel Gondry's Science of Sleep was not particularly amusing and sickly cute. Sandwiched between was this loving, subtly cautionary romantic 'dramedy' about a young man, Joel (Jim Carrey), undergoing a fantastical scientific operation to remove all memory of his ex-girlfriend, the eccentric Clementine (Kate Winslet). The procedure draws him deep into his subconscious, and we're invited along for the ride. This second collaboration between Kaufman and Gondry (after 2001's Human Nature) has deservedly become something of a cult favourite.

Forget Garden State: while Eternal Sunshine shares a desire to explore the truth behind the human condition through a skewed fish-eye lens, it is mercifully free of that film's cloying sentimentality, its narcissism, and its contempt for a mainline predefined as banal. In Garden State, people are kooky but phoney, shallow and self-absorbed; Eternal Sunshine's Joel, meanwhile, is powerless against his absorption into the strange fearful passions of his dreams. With impressive psychological literacy, Kaufman and Gondry's film shows us the selfishness of human desire and are - crucially - critical of it. Hollywood loves nothing more than to make lovers of ill-suited characters thrown together by circumstance. Not so here: the joy of watching Joel and Clementine's relationship blossom - and fade - is that it is a product of choice as much as chance, and so it is believable.

Winslet puts in a signature performance; her Clementine is the extrovert to Carrey's Joel. Carrey, meanwhile, scribbles out his signature entirely: nary a mug passes across his face. His is a soulful turn of poise and intelligence.

Eternal Sunshine finds its home on DVD - by the third or fourth viewing you should have the fractured narrative pretty much sussed. Plus, it's ideal night-in viewing: warm, friendly, funny, and profound. In a cynical and ironic era, it's heartening to watch a film that finds love so alive and so precious. A classic.
続きを読む
7人のお客様がこれが役に立ったと考えています
違反を報告
レビュー を日本語に翻訳する

Richy Rich
5つ星のうち4.0 Spotless? No, but nearly flawless.
2011年4月29日に英国でレビュー済み
Amazonで購入
It's complicated.... no, that's another film!

Eternal Sunshine (Of The Spotless Mind) is not a film you watch to unwind to; which is what I did one evening and by the time the opening credits had passed by no more than ten minutes I was lost (it has an unusually long intro of some seventeen minutes). At the end of the film I thought, " What was that all about?".... but I'd missed the point. It is a very clever film that requires your full attention or you just don't get it.

I watched it again, this time more awake, and found it fascinating. Still with the odd moment of confusion but I thoroughly enjoyed it and will gladly watch it again. Kate Winslet is brilliant - wacky, brash and in your face but ultimately wonderful. Jim Carey is really very good as the more serious partner and he narrates the juxtaposed events; the other cast members admirably support the story also.

There's a great twist at the end, which finishes the film very well and, all in all (without trying to précis the scenario complexities) the film is very well worth watching. Complicated.... yes, clever.... definitely, enjoyable.... certainly (unless you're a bit too relaxed), worth watching.... without a doubt.

In the end it's almost flawless, if not eternally radiant, and I loved it!
続きを読む
2人のお客様がこれが役に立ったと考えています
違反を報告
レビュー を日本語に翻訳する

Joachim Møller
5つ星のうち5.0 Favorite movie of all time.
2014年9月6日に英国でレビュー済み
Amazonで購入
Until I saw this I was torn between Titanic (have a thing for both Kate and Leo), Braveheart, Name of the Rose, Dances with Wolves (get the extended very long version) and Terminator 2 for favorite movie ever, but this one is my clear favorite now. Can watch it over and over again. The emphasis on how we're all screwed up in our own way and how coming to terms with it as a sort of salvation and pre-requisite for love and forgiveness is powerful. That it is also extremely innovative in it's cinematics and story-telling and has one of the best ensembles ever just brings home the bacon.
続きを読む
違反を報告
レビュー を日本語に翻訳する
すべてのレビューを参照します
トップへ戻る
Amazonについて
Amazonでビジネス
Amazonでのお支払い
ヘルプ＆ガイド
日本語ショッピングのための言語を選択します。 日本ショッピングのための国/地域を選択します。
© 1996-2020, Amazon.com, Inc. or its affiliates