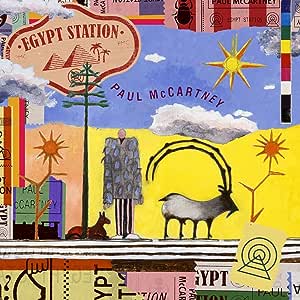 smh1976
5つ星のうち4.0 Highly Entertaining Album
2018年9月7日に英国でレビュー済み
Amazonで購入
"Egypt Station" is a very adventurous, accessible and at times, thrilling album, with excellent production by Greg Kurstin. "Happy With You" and "Hand In Hand" are effortless melodic marvels, with exquisite acoustic guitar work and heartfelt vocals. The closer, "Hunt You Down/Naked/C-Link" is a tremendous medley of catchy riffs, piano pop and stunning lead guitar and orchestra interplay. Elsewhere, "Caesar Rock" successfully experiments with loops and modern stylistics whilst Macca affects a Mick Jagger-like vocal (yes really), and "Who Cares" is a stomping rocker with an infectious 'Get Back' refrain to it. Even the weaker tracks play their part in the album's overall feel. If you're expecting another sober, artful record such as "Flaming Pie" or "Chaos & Creation..." maybe this record isn't for you, but personally I'm amazed at the energy, unpretentiousness, and sense of fun on this album. It's a blast!
続きを読む
41人のお客様がこれが役に立ったと考えています
違反を報告
レビュー を日本語に翻訳する

lindamary
5つ星のうち5.0 Too bad I can't click on 6 stars!
2018年9月8日に英国でレビュー済み
Amazonで購入
I've been a fan all my life, and yet, I'm trying to be objective when I say that this album is a real gem! Of, course, Paul is 76 and some might say that his voice is not as it used to be. They're probably right. That being said, the artist is still as inventive and creative and some songs are surprisingly more serious than expected from him - My favourite? Despite Repeated Warnings... So, let's not ignore this beautiful album and let's all enjoy it!
続きを読む
38人のお客様がこれが役に立ったと考えています
違反を報告
レビュー を日本語に翻訳する

Quiverbow
5つ星のうち4.0 Still rolling
2018年9月8日に英国でレビュー済み
Amazonで購入
What does a man in his eighth decade who has written a few songs, sold a few records and earnt himself a few quid along the way do with his time? If you’re Sir James Paul McCartney, there’s only one thing you can do.

This is a fine sounding album (can us oldies still use that for a CD?) musically. Okay, the musicianship should be exemplary anyway, but this has just the right amount. ‘Come On To Me’ was an obvious single, if such things actually exist now, and the first few notes of ‘Who Cares’ is reminiscent of the start from Harrison’s ‘It’s All Too Much’, but turns into a decent rocker with plenty of guitar. But he has always been melodic with a softer side and ‘Happy With You’, ‘Confidante’ and ‘Hand In Hand’ are just that.

He even goes along a semi samba route with ‘Back In Brazil’ but ‘Caeser Rock’ struggles as something he might have belted out in the early 70s. Yes he can sing better than all of us but I think he fails in his endeavour on this. It has a bit of backward guitar in it. My own opinion of ‘Despite Repeated Warnings’ is it's too political and goes on too long to be anything other than a bit of a mess. The last track, ‘Hunt You Down/Naked/C-Link’ starts with a catchy riff and ends with two minutes of vocal less guitar, and you'll know when each part of the three starts.

There are a couple of things here I don’t much care for, but the rest is a good mix of ballads and rockers and most have complete endings. Not his best and certainly not his worst, and it is close to an hour's worth of listening. It’s a shame the cracks in his voice are evident on some songs and it does make you wonder how much more he has in him. I don’t want to read reviews of anything he does that say, “This man used to be Paul McCartney”.

As a point of interest, my CD was stickered as a ‘Limited Edition Concertina CD’ but I’m guessing it’s limited to how many can be sold.
続きを読む
26人のお客様がこれが役に立ったと考えています
違反を報告
レビュー を日本語に翻訳する

Mr Smith
5つ星のうち5.0 Ticket to Ride all aboard Egypt Station
2018年9月8日に英国でレビュー済み
Amazonで購入
So I know nothing is perfect and people love to knock McCartney let’s face it if you had a catalog of songs and music of the size of McCartney how do you top your best work ? Because every critic loves to find falt . Anyway who cares about what idiots say ! It’s probably the most perfect imperfect album because nothing is perfect and that makes it genius . Keep on rocking McCartney this album is Fab . Despite Repeated Warnings what a track 14 it’s got the feel of band on the run . Can’t falt this on all aboard for a great journey Egypt Station . Please get a ticket to ride you won’t be disappointed .
続きを読む
20人のお客様がこれが役に立ったと考えています
違反を報告
レビュー を日本語に翻訳する
すべてのレビューを参照します
Amazonプライム会員ならお急ぎ便、日時指定便が使い放題
さらに、映画もTV番組も見放題。200万曲が聴き放題 。クラウドに好きなだけ写真も保存可能。
> プライムを無料で試す